The Governor-General has hosted a high-level reception in New York for UNSW law professor and UN representative Megan Davis. 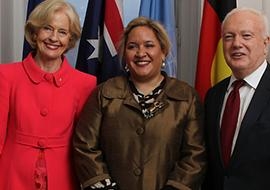 The reception was the culmination of a week-long tour of Canada by a delegation led by the Governor-General focusing on economic development in Indigenous communities.

Professor Davis, who is director of UNSW's Indigenous Law Centre, became the first Australian Indigenous woman to be elected to a UN body when she was voted onto the UNPFII in 2010.

She will serve a second term on the Permanent Forum if re-elected in an ECOSOC vote this weekend.

Professor Davis was conducting research for a study she is writing for the UN into the impact of the mining boom on Aboriginal communities in Australia.

The delegation met with Indigenous groups, including the Musqueam community in Vancouver, the Assembly of First Nations in Ottawa and the Iqaluit in Nunavut in the Arctic.

Nunavut in particular is entering a mining boom similar to the one experienced in Australia, Professor Davis said.

“It was important to talk about the necessity of community readiness and preparation for the way a mining boom transforms communities in positive and negative ways,” she said.

“What I came away with from the trip was just how important constitutional protections and treaty agreements are to the economic development of aboriginal people.

“In Canada, constitutional protections and post-colonial treaty agreements have enhanced economic development by giving aboriginal people a solid land base from which they can negotiate.

“It’s an entirely different approach in Australia where there are no treaty agreements and no constitutional protection of Indigenous land tenure.”

Having the Governor-General host the UN reception in New York was a “great honour and privilege”, Professor Davis said.

“Her Excellency Quentin Bryce was someone I looked up to as an indigenous girl growing up in Queensland. Her work on equality for Australian women and Aboriginal women in the 1980s and 90s made her a role model for everyone.”