Prime Minister Tony Abbott speaks the tough language of the post 9/11 era as he pushes for laws we don’t need, writes Fergal Davis. 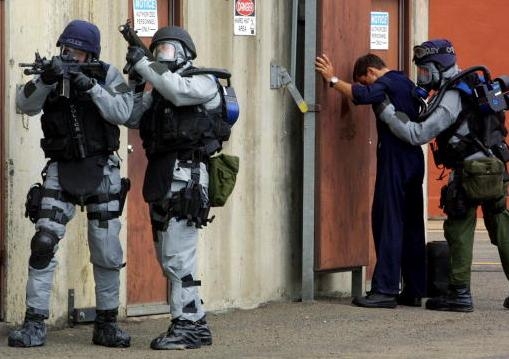 OPINION: On Monday Prime Minister Tony Abbott outlined his vision for Australia's national security. The statement is striking in terms of the rhetoric and the substance. Stylistically, the  Prime Minister is "standing on the shoulders of giants"; his speech gave more than a passing nod to former US president George W. Bush. In terms of substance, there is little new.

On September 20, 2001 Bush addressed a joint session of Congress and the American people. In that speech  he  he first used the term "war on terror". The war would begin with Al-Qaeda but not end there. Everyone had a simple choice: "either you are with us, or you are with the terrorists", Bush said.

Unfortunately there is little evidence of cool reflection and strategizing in this announcement. Instead Abbott proposes legislation where none is needed.

On February 23  the Prime Minister tweaked that language. Australia, he said,  is experiencing a "long-term era of terror". The enemy is no longer just Al-Qaeda but the broader Islamist "death cult".  He made it clear that "on all metrics the threat to Australia is worsening".

For Abbott, rhetorically at least, the demand is clear: "either you are with us, or you are with the terrorists". Such an approach lacks any sense of inclusivity. It risks alienating Australian Muslims and marking them out as a "suspect community". It continues the failed rhetoric of the post 9/11 decade.

In terms of the substance of the speech  Abbott is at least honest; he "can't promise that terrorist atrocities won't ever again take place on Australian soil", but the government will not underestimate the threat.

There is nothing inherently wrong about the proposal for a new co-ordinator – let's avoid the term "tsar" – but recent operations in Sydney seem to highlight a successful working relationship between the AFP and NSW Police at least. The Martin Place Siege: Joint Commonwealth – New South Wales Review found that "the judgments made by government agencies were reasonable and that the information that should have been available to decisionmakers was available".

On the alert system, this looks like grade inflation. Australia has been on high alert since September. The only higher level is "extreme – terrorist attack is imminent or has occurred". In reality, it is not obvious that a National Terrorism Public Alert System is genuinely helpful in communicating threat levels to the public.

Striking the correct balance between liberty and security is a perennial conundrum.  Abbott attempted to sum up this dilemma with a rhyming couplet: "there's been bail when there should've been jail".

Under the terms of the NSW Bail Act, 2013, for example, a bail authority "must" refuse bail if granting bail would present an "unacceptable risk".  The risk is unacceptable if releasing the accused would "endanger the safety of victims, individuals or the community". No reform of the bail laws is needed – if anything, many within the legal community of NSW think that state's bail laws are already too stringent.

Perhaps the marquee announcement was the call for tougher immigration laws. It is true that Man Haron Monis entered Australia on a one-month business visa in 1996. He applied for, and was granted, a protection visa, and 18 years later he committed an act of terrorism. We must evaluate that decision based on the information known to the authorities at the time. Anything else is hindsight.

More generally, Australia has a notably tough immigration regime. Involvement in criminal activities, including terrorism, overseas would be a bar to the granting  of a visa. In 2012 the High Court held that the regulations, which formed the legal basis for the indefinite detention of those subject to adverse security assessments, had been invalidly enacted. In May 2014 the Migration Act was amended, with bipartisan support, to enable the authorities to deny refugee status to anyone subject to an adverse security assessment. Such assessments are not subject to review by an independent tribunal. The immigration regime is many things but it it not lax.

With his   statement Abbott had an opportunity to (re)define his leadership. In December he avoided a knee-jerk reaction to the events in Martin Place. He did not recall Parliament. He did not appear to panic. Unfortunately there is little evidence of cool reflection and strategizing in this announcement. Instead Abbott proposes legislation where none is needed.

Since the attacks on the United States in September 2001, Australia has enacted  more than 60 tough counter-terrorism laws. These laws have been subjected to numerous reviews. They require amendment – not to make them tougher but to make them more effective. Abbott's  statement could have set out that vision for reform. It did not.

Dr Fergal Davis is a senior lecturer in Law and member of the Gilbert + Tobin Centre of Public Law at UNSW.

What are double dissolutions and how do they work?