Science/Law graduate Sarah Lux-Lee plans to use her Sir John Monash Scholarship to study a Masters in Public Administration at Columbia University. 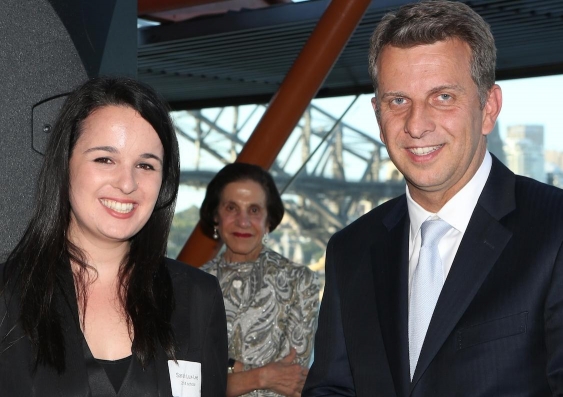 UNSW’s Sarah Lux-Lee plans to use her Sir John Monash Scholarship to study a Masters in Public Administration at Columbia University.

Sarah was named one of 15 winners of the prestigious postgraduate scholarship awards, administered by the General Sir John Monash Foundation.

The awards recognise academic excellence, leadership skills and commitment to the Australian community. They endow students with $50,000 a year for up to three years to undertake Masters or Doctoral degrees at the world’s best universities.

With degrees already in Science and Law from UNSW, Sarah aims to continue her studies in New York.

“It's an incredible honour to be chosen as someone who will drive forward General Sir John Monash's legacy.  I'm still in a bit of shock, and don't yet entirely believe that it's real,” she says.

Sarah is currently an Adjunct Lecturer at UNSW Law and teaches Advanced Legal Research. She is also National Copyright Manager for the Standing Council on School Education and Early Childhood.

In 2011 she co-founded the Professional Women’s Forum, a Sydney-based gender diversity initiative. In the same year she also co-founded the Social Interface, an online publication that brings together lawyers, engineers, software developers and scientists to discuss the social impact of technology. The site, created with UNSW Law Senior Lecturer Lyria Bennett Moses, has been viewed more than 30,000 times.

“People are sometimes surprised by the idea of a lawyer having a maths degree,” Sarah says, “but studying such diverse fields at UNSW was a huge springboard for me. It really pushed me to broaden the way I think about problems and how to solve them, and has been invaluable in my work in both law and policy.”

The Rhodes Scholarship NSW runner-up, Emily Rumble, is also from UNSW. Emily is now in contention for the Australia-at-Large Rhodes scholarship to be announced in December.

The 2014 Sir John Monash Scholarships will be officially awarded by the Governor General at the annual Scholarship Ceremony in February 2014.

For more information about the Sir John Monash Scholarships go to www.monashawards.org