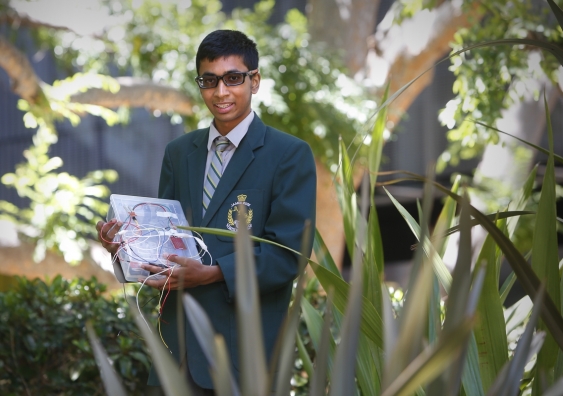 An automated sprinkler system which scans for light, humidity, temperature and soil moisture – even rain intensity and wind speed – before watering plants, has been developed by a 15-year-old student from Parramatta’s James Ruse Agricultural High in Sydney.

The prototype invention developed by Year 9 student Sabiqul Hoque has won a national competition run as part of Made by Me (madebyme.org.au), a collaboration between UNSW and seven other top universities and Engineers Australia to highlight engineering as an attractive career for young men and women.

“I came up with the idea after watching the sprinkler system at school, which is timer-based and not very good – it sprinkles water even when the plants don’t need it,” said Sabiqul, a resident of Bella Vista, in The Hills Shire. “So we mostly run it on manual, and turn it on when water is needed. But if we forget, plants can go for days without being watered.”

There had to be a better way, he thought. Sabiqul was surprised to discover that fancy ‘automated’ commercial sprinkler controllers, costing almost $350, did little better: they had only two sensors – one to detect rain, one for soil moisture. And you had to buy each separately.

As any student at James Ruse Agricultural High will tell you, there’s a lot more to ensuring optimal plant growth than that. To be effective – and truly automated – a sprinkler system would need to know temperature, relative humidity, soil moisture, rain intensity, light intensity and wind speed (the latter so that the sprinkled water isn’t cast too far from target).

So Sabiqul built one. Working over two months, he hand-drew circuit diagrams for each of the sensors, built them and tested each one before moving on to the next, using components like transistors, resistors and voltage regulators from electronic hobby suppliers, wired together on a solder-less breadboard.

His agriculture teacher at the selective, co-educational public high school in Carlingford suggested using an Arduino micro-controller, an open-source computer platform with easy-to-use hardware and software, to manage the sensors that turn the sprinkler ‘on’ and ‘off’. Sabiqul bought one, learned Arduino’s IDE software, and programmed it with all of the variables – with thresholds for temperature, humidity, soil moisture and brightness – which would determine when the sprinkler should activate, and when it should shut down. To supply the water, he modified a windscreen wiper pump to work with the circuitry.

Over the next few months, he experimented with his apparatus to ensure each of the components worked, before putting it all to the test by growing two different plants: a grafted palm tree and a small mango plant. Over 30 days, the mango plant grew 37% to 22 cm; the palm tree grew 6.4% to 82 cm in height.

“Basically, what it does is look at the average temperature, and if it is above 20˚C, it counts this as a high, so it knows to turn on the pump – unless the soil is already wet from rain,” said Sabiqul. “The light detector indicates if it’s day or night; if it’s night and it’s hotter than 20˚C and humid, the sprinkler will come on because the plant needs it.” 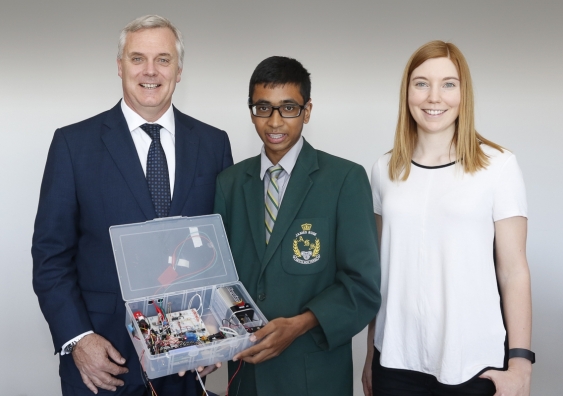 Prof Mark Hoffman, UNSW’s Dean of Engineering, was impressed: “Sabiqul has really thought this through. It’s remarkably clever, based on sound agricultural knowledge and showing a real talent for good engineering. I can’t believe there isn’t a product on the market as sophisticated as Sabiqul’s device.”

The Made By Me campaign seeks to challenge stereotypes and show how engineering is in everything we do, in an effort to change the way young people – particularly girls ­– see engineering. Launched in July with a futuristic music clip by twin-sister duo NERVO – the 29-year-old singer-songwriters and sound engineers, Miriam Nervo and Olivia Nervo – it consists of a website with inspiring profiles of young engineers and their work, and a strong online advertising and social media campaign developed by advertising agency Whybin/TBWA.

The specially commissioned music video of “People Grinnin’ (featuring The Child of Lov)” by NERVO is embedded with Google Cards showing the engineering behind everyday objects, like drinking water, a smartphone and makeup. The ‘explainers’ click through to more about featured objects, and profiles of engineers working on everything from medical imaging and the International Space Station to a humanitarian work delivering clean water to communities in developing countries.

“We needed to find a way to meet teenagers on home turf and surprise them with an insight into engineering that would open their minds to its possibilities,” said Hoffman. “This is what led to the idea of producing an interactive website built around a music video, which is itself sprinkled with nuggets of information about engineering designed to pique a young person’s interest in the field.”