App for crime victims and witnesses

A unique app, iWitnessed, has been launched by scientists, lawyers and police to assist victims and witnesses record information that can help with convictions and prevent miscarriages of justice. 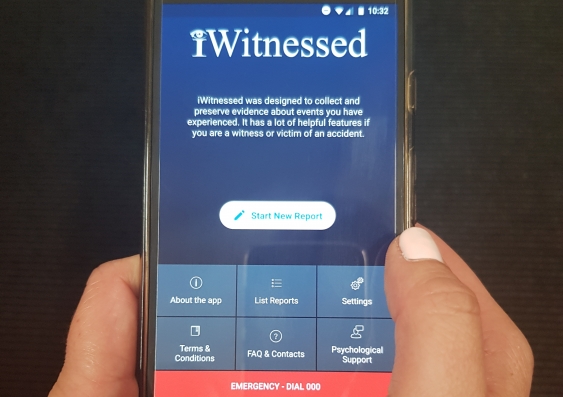 A unique app, iWitnessed, has been launched today by leading Australian cognitive scientists, lawyers and police to assist victims and witnesses record information in a way that can help with convictions and prevent miscarriages of justice.

iWitnessed was developed by experts in forensic psychology: Professor Richard Kemp from UNSW and Dr Helen Paterson and Dr Celine van Golde from the University of Sydney.

Former Director of Public Prosecutions Nicholas Cowdery, a Visiting Professorial Fellow at UNSW, sought to ensure that the evidence gathered using iWitnessed would have the best chance of being admissible in court. Consultation with the NSW Police Force ensured the smartphone app was a practical tool that would assist police with their investigations.

The app incorporates guided questioning and enables users to record information as text, voice, images and map locations – all information is time and location/GPS stamped. iWitnessed users can send their account to police, or any other secure email address, with reports easily convertible to pdf.

iWitnessed is available for free download in Australia on both Apple and Android devices.

Professor Kemp, of the UNSW School of Psychology, said iWitnessed fills a critical gap in the legal system, empowering witnesses and victims by ensuring the quality of their evidence.

“We believe iWitnessed should make a useful contribution to the legal system in Australia and will help witnesses provide accurate, high-quality evidence to assist police investigations and court processes,” he said.

Dr Paterson, from the University of Sydney’s School of Psychology, said iWitnessed is a best-practice immediate recall tool designed to preserve witness accounts for any type of event, including one-off events (such as car accidents) and repeated or ongoing events (such as bullying or harassment).

“This project places Australia at the forefront of international initiatives to improve the collection of eyewitness evidence and it will help in the investigation and prosecution of incidents,” Dr Paterson said.

Nicholas Cowdery QC, who is an Adjunct Professor at the Sydney Institute of Criminology, said evidence on iWitnessed could be relied on in the same manner as contemporaneous notes or recordings to refresh the memory of a witness to an event as stipulated in the Evidence Act 1995 NSW (sections 32 and 34).

“Contemporaneous notes, even if scribbled on the back of a napkin, can strengthen the reliability and strength of the evidence being given in court proceedings,” he said.

Dr Paterson said the app was not to be confused with the start-up iWitness, which encouraged users to livestream recordings for a fee, and highlighted the importance of seeking help in an emergency.

“We encourage people to use iWitnessed as much as possible to make recordings and report their observations of tragic events; in cases of an emergency however, people should immediately phone 000,” she concluded.

A two-part series on eyewitness memory, which will feature iWitnessed in the second episode, begins on SBS TV’s Insight program on Tuesday 3 April.

Justice and the political future for Indigenous Australians