Sunswift eVe – the world’s fastest long range electric car – is on a regional outreach tour across NSW this week. 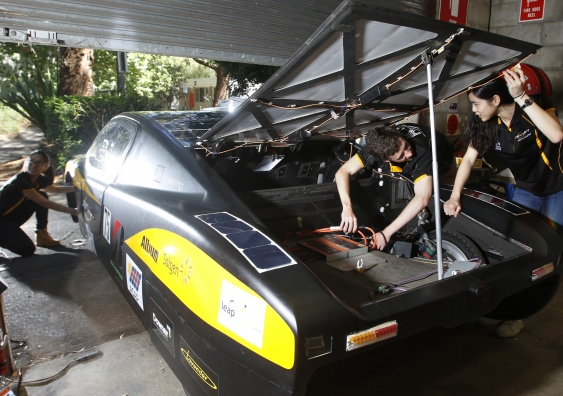 A sleek, black two-seater sports coupé, eVe – built by engineering students at the Solar Racing Team Sunswift at the University of New South Wales in Sydney – has twice represented Australia at the World Solar Challenge, a grueling 3,021 km race.

In 2014, eVe took out the world land-speed record for an electric vehicle, travelling at an average 100 km/h over a distance of 500 km on a single charge. This toppled a record which had stood for 26 years, and the Fédération Internationale de l’Automobile recognised the team with a world record trophy. 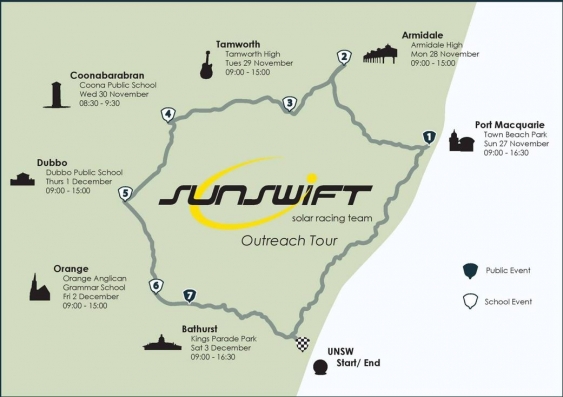 It is the fifth race car built by Sunswift since the team was founded in 1995, hence the capital V (for the Roman numeral 5) in its name. eVe can travel up to 500km on a single charge of its batteries, or over 800km if powered by its solar cells as well. Once depleted, the batteries can be recharged in 10 hours on a household power socket, or in less than 7 hours using a commercial charging station. It costs around 80¢ to fuel the car for every 100 km, compared to an average $15 for a conventional petrol car.

“There’s nothing like working on a solar-powered race car to give you hands-on understanding of the mechanics and instrumentation of both cars and solar energy,” says Simba Kuestler, a 4th year renewable energy engineering student at UNSW and Sunswift’s project manager. “Between lectures, study and sleep, we spend a lot of time in the workshop with her. It’s very social as well as educational.” 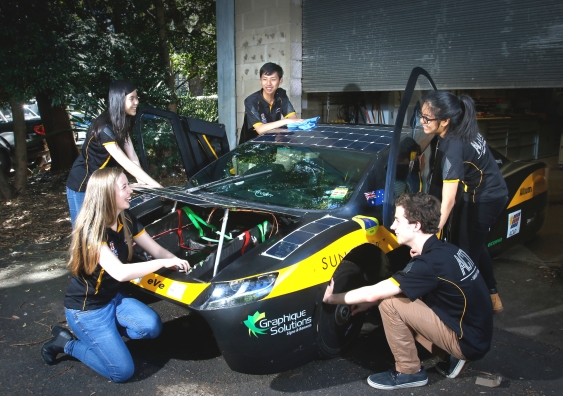 The tour begins with a weekend public showing at Town Beach Park in Port Macquarie on Sunday 27 November, and ends with an all-day weekend display at Kings Parade Park in Bathurst on Saturday 3 December. The team will give live demonstrations, answer questions, and even allow people to sit in the cockpit for photos.

“Selfies with eVe are very popular,” says Connor O'Shea, a 1st year mechanical engineering student and the Sunswift’s business manager. “People love the car, and the whole idea that a cool-looking spots car can run entirely on solar power. And we love nothing better than to show her off; we’ve very proud of eVe.”

During the week, the Sunswift crew will visit schools in Armidale, Tamworth, Coonabarabran, Dubbo and Orange and display the car, make presentations and pose for photos with kids. They will also give hands-on workshops on how to build miniature solar cars, as well as and talks on solar power and engineering.