Inspired by bacteria able to thrive in the ocean’s inky depths, award-winning UNSW chemist Cyrille Boyer has for the first time used near-infrared light to create polymers – a discovery with implications for nanomedicine. 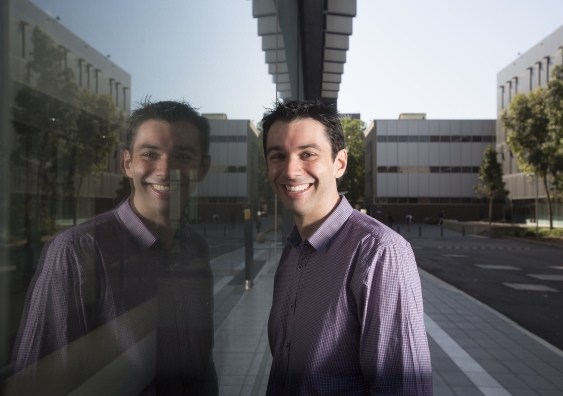 Inspired by bacteria able to thrive in the ocean’s inky depths, award-winning UNSW chemist Cyrille Boyer has used near-infrared light to create polymers – a discovery with significant implications for nanomedicine.

Associate Professor Boyer was named the 2015 Physical Scientist of the Year at the Prime Minister’s Prizes for Science for his work with polymers – small, repeating chains of molecules that are ubiquitous in nature and industry.

Polymers make up the human body’s DNA and proteins, while synthetic polymers are used to manufacture everything from paints and plastics to textiles and glue.

Associate Professor Boyer, who is deputy director of the Australian Centre for Nanomedicine, is looking for more sustainable ways to produce these essential molecules, particularly for use in medical applications.

For the first time, he has been able to use a low-energy form of light known as near-infrared to drive the polymerisation process, a breakthrough Associate Professor Boyer said would open new horizons for materials science and medicine.

“We’ve opened a new door and shown something that was not possible before,” he said of the discovery, published in the latest edition of leading chemistry journal Angewandte Chemie International Edition.

All objects with a temperature emit infrared radiation, and Associate Professor Boyer’s work focuses on a part of the spectrum called near-infrared – a kind of energy harvested by bacteria living in deep-sea vents where light is scarce.

These bacteria use a specialised kind of chlorophyll to harness the near-infrared light, which is emitted from superheated waters erupting from the vents.

Associate Professor Boyer and PhD candidate Siva Shanmugam were able to mimic this process in the laboratory, and use the energy produced to build polymers, with an exquisite degree of control over initiating and stopping the process and the length of the chains produced.

Near-infrared is an exciting energy source because, unlike visible light, it can penetrate objects including human tissue while using a fraction of the energy, making it much safer than ultraviolet (UV) light for biological use.

UV light damages DNA and can cause cancer and mutations, making it toxic for humans, but Associate Professor Boyer said the safety profile of near-infrared light meant it could be used within the body to regenerate tissue or control bleeding during surgery.

Such polymerisation could also be done within the body, he said, paving the way for new joint replacement cements that could be triggered to set with near-infrared light rather than setting within moments of being applied.

The next phase of his research will focus on in-vitro studies using live material, with the aim of encapsulating living cells in polymeric gels.

“Using a system like near-infrared will allow you to be more friendly for the materials and also biofriendly for humans,” he said.

Associate Professor Boyer, a French national who grew up on a vineyard near Avignon, is an Australian Research Council Future Fellow and member of the Centre for Advanced Macromolecular Design at UNSW.

He was awarded the 2016 Le Fevre Memorial Prize by the Australian Academy of Science as well as the Prime Minister’s Malcolm McIntosh Prize for the Physical Scientist of the Year for his polymer and nanoparticle research.