A team of Sydney scientists – including UNSW's Katharina Gaus – have made a groundbreaking discovery in telomere biology with implications for conditions ranging from cancer to ageing and heart disease. 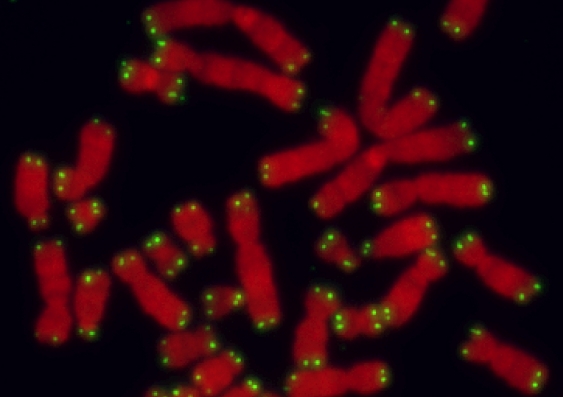 A team of Sydney scientists has made a ground-breaking discovery in telomere biology, with implications for conditions ranging from cancer to ageing and heart disease. The research project was led by Dr Tony Cesare, Head of the Genome Integrity Unit at Children’s Medical Research Institute (CMRI) at Westmead, in collaboration with scientists from CMRI as well as UNSW Sydney's Katharina Gaus.

Telomeres are DNA segments at the ends of every human chromosome. As we age, telomere length naturally decreases. Over the course of a lifetime, telomere shortening instructs ageing cells to stop dividing.

This normally functions as a critical barrier to stop cancer. However, some people are born with abnormally short telomeres and suffer from bone marrow failure, pulmonary fibrosis and high rates of cancer. Telomere length is also an important marker of disease risk for conditions such as cancer, heart disease and diabetes.

Telomere shortening causes chromosomes ends to resemble broken DNA. However, it has remained a mystery why telomeres change from healthy to unhealthy with age. This research has identified the underlying cause.

“We knew that telomeres regulate cellular ageing, but our new data explain the trigger that makes telomeres unhealthy,’’ Dr Cesare said. “Telomeres normally form a loop structure, where the chromosome end is hidden. We found that when the telomere-loop unfolds, the chromosome end is exposed and the cell perceives this as broken DNA.’’

Dr Cesare further explained: “It is not telomere length that matters, but telomere structure. The telomere-loop becomes harder to form as telomeres get short.”

Additionally, the team identified that telomeres can also change structure in response to some chemotherapeutic agents, which helps kill cancer cells.

The results of this study have also proven how important technological advances are in the field of research. Dr Cesare first developed his theories about telomere-loops in 2002 when studying for his PhD. However, the technology was not available at the time to easily visualise telomere-loops using microscopy.

“This technology allowed us to see 10 times more detail than we had in the past,’’ Dr Cesare said. “We could pass the physical limits of light and see the telomere-loop structure.” To complete the project, the team combined this breakthrough technology with powerful genetic models that mimic cellular aging.

“We were only the second group in the world to see telomere-loops with super-resolution microscopes and the first to determine their function. It took us four and a half years to complete the project. It has been an enormous effort that I didn’t think was feasible five years ago.’’