Ancient rocks from Greenland have shown that the elements necessary for the evolution of life did not come to Earth until very late in the planet’s formation – much later than previously thought. 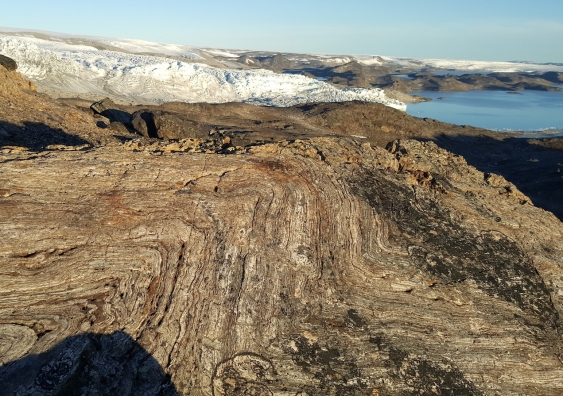 The rocks the team analysed are the oldest preserved mantle rocks. They allow us to see into the early history of the Earth as if through a window. Photo: UNSW

An international team of geologists – led by the University of Cologne and involving UNSW scientists – have published important new findings about the origin of oceans and life on Earth: they have found evidence that a large proportion of the elements that are essential to the formation of oceans and life – such as water, carbon and nitrogen – only came to Earth very late in its history.

Many scientists previously believed that these elements had already been there at the beginning of our planet’s formation. However, the geological investigations published in prestigious journal Nature today have shown that most of the water in fact only came to Earth when its formation was almost complete.

Volatile elements such as water originate from asteroids, the planetary building blocks that formed in the outer solar system. There has been a lot of discussion and controversy in the scientific community around when precisely these building blocks came to Earth. 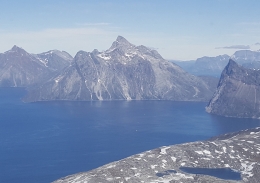 The geological investigations published today have shown that most of the water only came to Earth when its formation was almost complete. Photo: UNSW

Dr Mario Fischer-Gödde from the Institute of Geology and Mineralogy at the University of Cologne, who led the work, says we are now able to narrow down the timeframe more precisely.

“The rocks we analysed are the oldest preserved mantle rocks. They allow us to see into the early history of the Earth as if through a window.

To understand the temporal process, the researchers determined the isotope abundances of a very rare platinum metal called ruthenium, which the Archean mantle of the Earth contained.

Like a genetic fingerprint, the rare platinum metal is an indicator for the late growth phase of the Earth.

“Platinum metals like ruthenium have an extremely high tendency to combine with iron. Therefore, when the Earth formed, ruthenium must have been completely discharged into the Earth’s metallic core,” says Professor Fischer-Gödde. 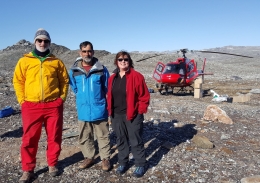 Professor Martin Van Kranendonk, the UNSW scientist who was part of the research, says the reason why this is of such interest relates directly to understanding the origins of life on Earth, how we humans came to be, and in fact, to whether we might be alone, or have neighbours in the universe.

“This is because the results show that Earth did not really become a habitable planet until relatively late in its accretionary history,” he says.

“If you combine this with the evidence for very ancient life on Earth, it reveals that life got started on our planet surprisingly quickly, within only a few hundred million years. Now this might sound like a lot of time, and it is, but it is far different from what we used to think, that life took half a billion, or even a billion years to get started.

“And this gives hope for finding life on other planets that had a shorter geological history and period of ‘warm and wet’ conditions than Earth, because if life could get started quickly here, then perhaps it got started quickly elsewhere.”

Professor Dr Carsten Münker, also at the University of Cologne, added: “The fact that we are still finding traces of rare platinum metals in the Earth’s mantle means that we can assume they were only added after the formation of the core was completed – they were certainly the result of later collisions of the Earth with asteroids or smaller planetesimals.”

Scientists refer to the very late building blocks of Earth, which arrived through these collisions, as the ‘late veneer’.

“Our findings suggest that water and other volatile elements such as carbon and nitrogen did indeed arrive on Earth very late in the ‘late veneer’ phase”, Professor Fischer-Gödde says.

The new findings are the result of collaboration among scientists from Germany, Denmark, England, Australia and Japan. The scientists are planning further field trips to India, northwestern Australia, and Greenland to investigate more rock samples.