A faraway galaxy with almost no dark matter has threatened to break our theory of galaxy formation. New evidence suggests the galaxy isn’t an anomaly – but a victim of theft. 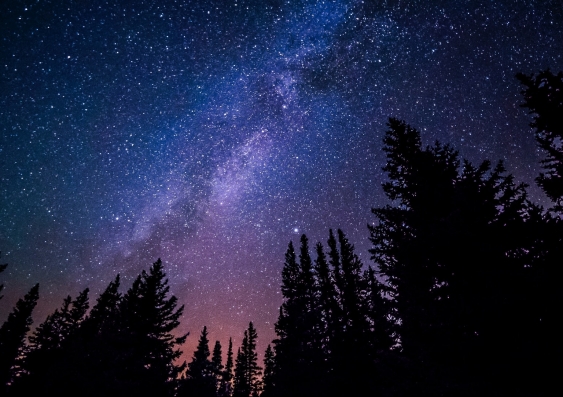 Was it Miss Scarlett with a dagger, or a massive nearby galaxy with strong gravity? Photo: Unsplash.

Dark matter – an invisible substance as enigmatic as its name suggests – is a key ingredient in helping galaxies form and stay alive.

But astronomers have been puzzled since last year’s discovery of ‘NGC1052-DF4’, a stable and long-lived galaxy with almost no dark matter. How can the galaxy exist without this important ingredient? Are our theories about galaxy formation wrong?

Today, an international study led by UNSW Sydney suggests the dark matter was there to begin with – it’s just been stolen by a greedy neighbour.

“The dark matter isn’t there because it’s already been removed,” says Dr Mireia Montes, lead author of the study and astronomical researcher at UNSW Science and the Space Telescope Science Institute.

“We found that the gravitational pull from the nearby massive galaxy NGC1035 is removing its stars – and dark matter.”

The research, published today in The Astrophysical Journal, provides an explanation for why so much dark matter is missing from the galaxy without contradicting our existing understanding of galaxy formation.

“When two galaxies are passing close to each other, they suffer from each other’s gravitational pull,” says Dr Montes. “Our very deep imaging found faint stars being pulled away by the larger galaxy – an interaction called ‘tidal disruption’.”

The same phenomenon can also be found on Earth: in our case, the Moon’s gravitational pull influences Earth’s ocean tides. But tidal disruption can cause galaxies – which aren’t as solid as Earth or the Moon – to bend and lose their shape.

If the tidal disruption theory is correct, the smaller galaxy NGC1052-DF4 will soon start to show more signs of deterioration. It could eventually disintegrate entirely.

“If the stars are starting to be disrupted now, most of the dark matter has already escaped.”

Dr Ignacio Trujillo, co-author of the paper and researcher at the Instituto de Astrofísica de Canarias (IAC), says “With time, the galaxy will end being cannibalised by the large system around it (NGC1035), with at least some of their stars free floating in the deep space”. 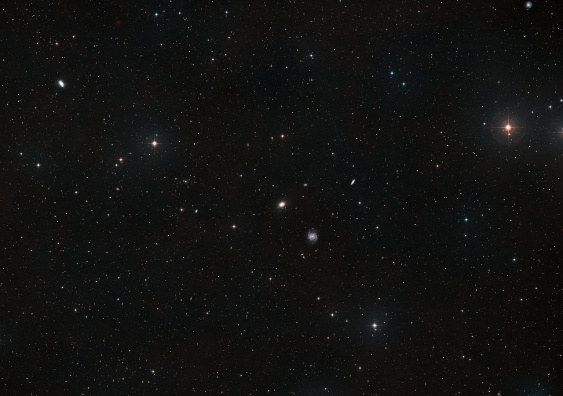 A ground-based view of the sky around the galaxies NGC1052-DF4 and NGC1052-DF2 – another galaxy with little to no dark matter. NGC1052-DF2 is next on Dr Montes' list of galactic mysteries to solve. Photo: ESA/Hubble, NASA, Digitized Sky Survey 2 (Davide de Martin).

Dr Montes and her colleagues used powerful telescopes and deep imaging techniques – including long-exposure photography of up to 60 hours – to find the faint clues in the outer edges of the galaxy.

These techniques are capable of illuminating very dim stars and galaxies, or what astronomers call the ‘low surface brightness’ of the universe.

“Initial papers showed that the galaxy has a very ‘relaxed’ symmetrical shape, suggesting that no outside forces were perturbing it,” says Dr Montes.

“But our deep images show that this galaxy is in fact being affected by its neighbour galaxy – it’s just caught in the beginning of the interaction.

“The inner part of the galaxy keeps its shape, but the outer, fainter parts are where you see these ‘tidal tails’: stars that have been already separated from the galaxy.”

The observations were made using the IAC80 Telescope, the Gran Telescopio Canarias, and the Hubble Space Telescope – one of the largest telescopes in space.

As dark matter is an invisible force, it can only be observed by how stellar objects – like stars and galaxies – interact with the space around them.

“Ultra-deep imaging is hard not only because of the huge amount of time you need to reach such depths, but the extremely careful processing of the data needed to preserve the faintest structures,” says Mr Raúl Infante-Sainz, PhD candidate at IAC and second author of this study.

“We needed to look for features that are 1000 times fainter than the darkest sky visible on Earth,” says Dr Montes. 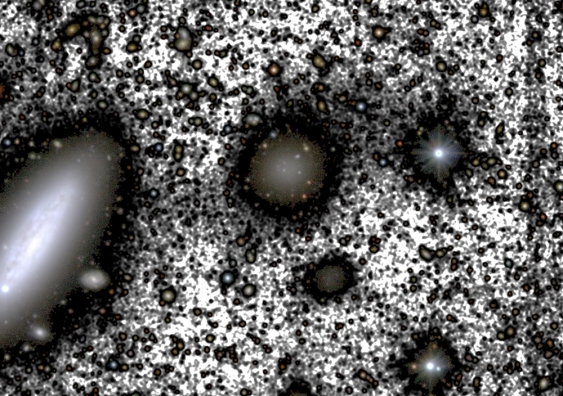 At first glance, the galaxy NGC1052-DF4 (centre) appears to be intact. But faint stars leaving the galaxy – shown by the grey shading in this composite colour image – reveals the galactic theft at play. NGC1035 is the large galaxy to its left. Image: M. Montes et al.

The observatory’s main project will be Legacy Survey for Space and Time (LSST): a ten-year imaging survey that will provide the deepest ever images of the Southern Hemisphere’s night sky.

Professor Sarah Brough, an astronomer at UNSW Science, is leading Australia’s involvement in this project.

“It will provide extremely deep imaging data over the entire Southern Sky, which will be vital to the success of future Australian astronomical surveys and science.”

The LSST camera, which will be roughly the size of a small car, will enable researchers to detect low surface brightness galaxies. It will also be capable of identifying faint features around and within galaxy clusters.

While the ten-year survey won’t kick off until 2023, scientists are looking forward to the opportunities for galactic exploration.

“This work is an example of how important it is to have deep images to understand apparently weird things in the Universe,” says Dr Montes.