After 40 years at the frontier of the medical devices industry, former Cochlear chief and new PLuS Alliance Professor Chris Roberts has built a career on being one step ahead of the curve. 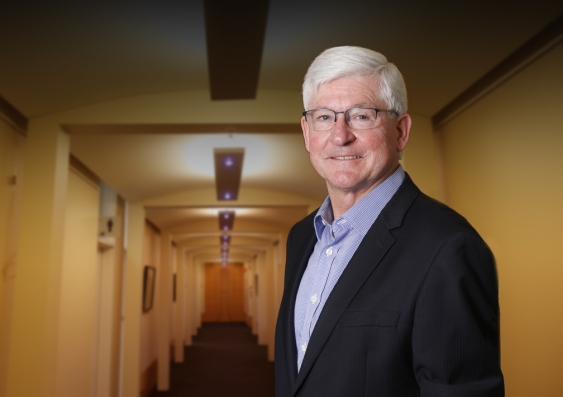 After 40 years at the frontier of ground-breaking medical device technology, former Cochlear CEO Chris Roberts has built a career on being one step ahead of the curve.

As the inaugural joint Professor of the PLuS Alliance, a global collaboration between UNSW Australia, King’s College London and Arizona State University, Roberts hopes to take his passion for innovation to the next level, bringing together government, industry and academia across three continents to solve some of the world’s most pressing problems.

“What are all these different countries, states and cities doing to drive innovation, to drive translation? What does the future look like and how do we participate in that?” he asks.

“It’s about government policy, it’s about industry and it’s about universities, and how do these groups work collaboratively together – what are the settings that the government needs?”

Strategic thinking is second nature for Roberts, a chemical engineer who started his professional life in the field of renal dialysis and went on to become chief of trailblazing hearing device company Cochlear – a position he held for 11 years.

A lot of collaboration, particularly in research, is bottom-up. But that’s not strategic.

“As a medical device company you’re trying to see the future of clinical practice, how are you as a health care professional going to want to manage your patients down the track, given the doubling of medical knowledge every 2 to 4 years,” he says.

“And it is also about being able to see the future of technology.”

In his new role with the PLuS Alliance, Roberts focus is to grow biomedical engineering’s footprint both locally and across the globe.

It’s an ambitious challenge, but one for which he’s well equipped, having worked in fields ranging from orthopaedics and cardiology to sleep medicine, as well as serving on the executives of Cochlear and ventilation technology giant ResMed.

“The medical devices industry is characterised by technologic innovation and research and development, and many are in niche markets so they have to be global. So I’ve spent my life in international, innovative businesses.”

He sees the PLuS Alliance as complementing these roles and says that, rather than simply swapping industry for academia, “I am actually creating something a little bit different”.

Roberts has long been a believer in the importance of universities to corporate innovation; he moved Cochlear back onto an academic campus at Macquarie University to bring it within a research environment.

Together, Cochlear and the university have built a ‘hearing precinct’ also housing not-for-profits and government statutory bodies – a “wonderful example” of top-down strategic collaboration Roberts says happens all too infrequently.

“A lot of collaboration, particularly in research, is bottom-up. But that’s not strategic,” he says.

“What I’m interested in is how do we take these three leading, globally thinking universities and top-down form a strategic alliance, how do we make that work?”

Though it’s early days – he started the position in February – Roberts has hit the ground running, returning from a fact-finding mission in London with a similar trip planned later this month to the United States.

Each PLuS Alliance university has different strengths, and his mission is to explore how new opportunities and advantages can be leveraged through collaboration, particularly in areas such as business and commercialisation or greater integration between and within faculties.

Plenty of things are exciting Roberts in the engineering space, from new materials to UNSW’s quantum computing research and developments in machine learning which he says could have important applications in medicine and research.

If you get up every morning motivated and fired up, and just put one foot in front of the other, it’s amazing what you can do.

His own journey into medical technology was one of “serendipity”. Originally seeking a degree that would offer good employment prospects, Roberts chose food technology, the logic being that “people are always going to need to eat”.

He ultimately decided to enrol in chemical engineering, thinking it sounded a bit more challenging, but still took all the food-related subjects: brewing, dairy, cheese “and that got me into biology and microbiology”.

While an undergraduate at UNSW, Roberts studied under ResMed founder Peter Farrell, who had done his PhD with US dialysis pioneer Belding Scribner and returned to Sydney to set up a new nephrology research lab.

“I did my final-year experimental design thesis in his lab and got really excited about dialysis – I was blown away that you could keep people alive with just these very simple chemical engineering principles,” says Roberts.

Cochlear founder Paul Trainor gave him his first job out of university in 1976.

Roberts went on to do his MBA and a PhD in biomedical engineering, completing his thesis on plasma exchange therapy for autoimmune diseases – a technique he ultimately likened to “killing a mosquito with a sledgehammer”, though it is used today to treat conditions like Guillain Barre syndrome.

He entertained the idea of going into medicine at some point but says he realised very early on that “if you could bring technology in and do some of these things you could probably influence just as many people, maybe a larger number of people”.

“I think you’ve always got to be moving forward,” he says.

“If you get up every morning motivated and fired up, and actually just put one foot in front of the other, it’s amazing what you can do.”

Calling time on indifference: How do we solve inequality?