A study of the fossil teeth of megafauna from Cuddie Springs in NSW suggests that climate change had a significant impact on the diets of these giants and may well have been a primary factor in their extinction. 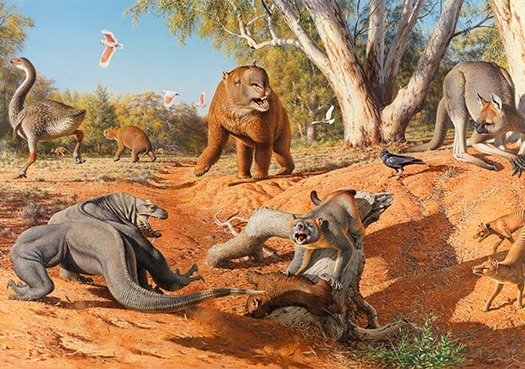 A study of the fossil teeth of megafauna from Cuddie Springs in NSW suggests that climate change had a significant impact on the diets of these giant animals and may well have been a primary factor in their extinction.

The research by an American and Australian team including Dr Judith Field and Professor John Dodson of the UNSW School of Biological, Earth and Environmental Sciences compared the diets of a variety of herbivores from the period when they were widespread (350,000 to 570,000 years ago) to a period when they were in decline (30,000 to 40,000 years ago).

The results are published in the journal Paleobiology.

“We have found evidence that, as the climate was changing and getting drier, animal diets were shifting dramatically,” says Larisa DeSantis, assistant professor of earth and environmental studies at Vanderbilt University in Tennessee, who directed the study.

“If climate change was a primary or contributing factor in their demise, as it appears, we need to pay more attention to how current levels of climate change are affecting animals today,” she says.

Cuddie Springs is located on a prehistoric ephemeral lake and it is the only site on mainland Australia that has produced fossil evidence of the co-existence of humans and megafauna.

“I think one of the most important points that this paper makes is that we need to understand the population biology of these extinct species to better understand the extinction risks,” says Dr Field.

“Significantly, the Cuddie Springs sequence provides us with three important lines of evidence – abundant fossil bone from a range of now extinct fauna through time; palaeo-environmental data which can be used to reconstruct the local environment and vegetation at the time of site formation and animal death; and a well provenanced record of humans and animals over time.

“Together the evidence provides important information about habitats and preferred diet of these extinct fauna to better inform us about the past," she says.

During the last Ice Age, Australia, Tasmania and New Guinea formed a single landmass, called Sahul. It was a strange and often hostile place populated by a bizarre cast of giant animals.

There were kangaroos weighing 225 kilograms, marsupial tapirs the size of horses and wombat-like creatures the size of hippos. There were flightless birds that weighed twice as much as a modern emu, 10-metre long snakes, 6-metre long crocodiles, 2.5-metre long turtles with horned heads and spiked tails, and giant monitor lizards that measured almost 2 metres from tip to tail and were likely venomous.

By about 30,000 years ago, however, most of these ‘megafauna’ had disappeared from Sahul as part of a global mass extinction that saw the end of nearly all of the super-sized animals that had evolved to survive in extreme Ice Age climates.

The factors that forced the Australian megafauna into extinction remain a matter of considerable controversy. Many experts argue that the ancestors of the Australian Aborigines, who made an appearance approximately 50,000 years ago, either hunted the megafuana into extinction or gradually destroyed the habitat they required by practices such as fire-stick burning.

Others argue that the gradual drying out of Australia and weakening of the Australian monsoon played a major role in their demise.

“This new study, based on hard evidence, makes it clear that changes in late Pleistocene climate had a major impact on the late Pleistocene megafauna of Australia, adding even more evidence to challenge the imaginative a priori assumption that ‘blitzkrieg’ by early humans caused the extinction of this continent’s lost megafauna,” says UNSW palaeontologist Professor Mike Archer.

“Climate change clearly has been in the past and will continue to be a major cause of extinction into the future.”

Clues about animals’ diet and the average temperature and humidity of the environment at the time their teeth formed can be obtained from the ratios of oxygen and carbon isotopes locked in the enamel of the fossil teeth. Differences within individual teeth mirror climate variability.

Analysis of the microscopic scratches on the surface of the teeth provides evidence of what the animal was eating in the last few weeks of its life. Differences in wear-patterns can differentiate between animals that were grazing on grass and browsing on bushes.

The dental analysis revealed that the climate was semi-arid during the megafaunal heyday around 500,000 years ago. In addition, the animals’ diets were highly variable, implying that there were a number of ecological niches available to them.

That contrasts markedly with the period from 30,000 to 40,000 years ago. The analysis indicates that the climate was substantially drier then and the diet of the giant herbivores was considerably more restricted.

“It appears that long-term aridification may have reduced the ability of megafauna to consume certain types of plants, including salt-bush. Eating salt-rich plants requires drinking additional water that was less available and likely increased competition for similar plant resources,” says DeSantis.

“These data clarify the impacts of climatic change on marsupial megafauna and suggest that the long-term drying out of Australia, identified here and in other records, likely played a key role in the decline and disappearance of this unique suite of animals.”