A team of Australian engineers has built a quantum logic gate in silicon for the first time, making calculations between two qubits of information possible – and thereby clearing the final hurdle to making silicon quantum computers a reality. 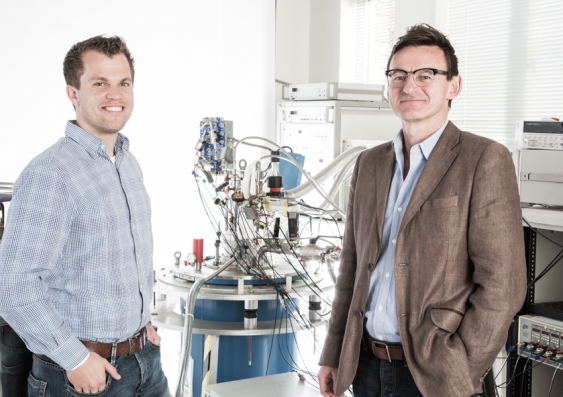 Lead author Menno Veldhorst (left) and project leader Andrew Dzurak (right) in the UNSW laboratory where the experiments were performed.

A team of Australian engineers has built a quantum logic gate in silicon for the first time, making calculations between two qubits of information possible – and thereby clearing the final hurdle to making silicon quantum computers a reality.

The significant advance, by a team at the University of New South Wales (UNSW) in Sydney appears today in the international journal Nature.

“What we have is a game changer,” said team leader Andrew Dzurak, Scientia Professor and Director of the Australian National Fabrication Facility at UNSW.

“We’ve demonstrated a two-qubit logic gate – the central building block of a quantum computer – and, significantly, done it in silicon. Because we use essentially the same device technology as existing computer chips, we believe it will be much easier to manufacture a full-scale processor chip than for any of the leading designs, which rely on more exotic technologies.

“This makes the building of a quantum computer much more feasible, since it is based on the same manufacturing technology as today’s computer industry,” he added.

The advance represents the final physical component needed to realise the promise of super-powerful silicon quantum computers, which harness the science of the very small – the strange behaviour of subatomic particles – to solve computing challenges that are beyond the reach of even today’s fastest supercomputers.

In classical computers, data is rendered as binary bits, which are always in one of two states: 0 or 1. However, a quantum bit (or ‘qubit’) can exist in both of these states at once, a condition known as a superposition. A qubit operation exploits this quantum weirdness by allowing many computations to be performed in parallel (a two-qubit system performs the operation on 4 values, a three-qubit system on 8, and so on).

“If quantum computers are to become a reality, the ability to conduct one- and two-qubit calculations is essential,” said Dzurak, who jointly led the team in 2012 that demonstrated the first ever silicon qubit, also reported in Nature.

Until now, it had not been possible to make two quantum bits ‘talk’ to each other – and thereby create a logic gate – using silicon. But the UNSW team – working with Professor Kohei M. Itoh of Japan’s Keio University – has done just that for the first time.

The result means that all of the physical building blocks for a silicon-based quantum computer have now been successfully constructed, allowing engineers to finally begin the task of designing and building a functioning quantum computer.

"Despite this enormous global interest and investment, quantum computing has – like Schrödinger’s cat – been simultaneously possible (in theory) but seemingly impossible (in physical reality),” said Professor Mark Hoffman, UNSW's Dean of Engineering.

“The advance our UNSW team has made could, we believe, be the inflection point that changes that Schrödinger’s paradigm," he added. "The technology – devised, tested and patented by our team – has the potential to take quantum computing across the threshold from the theoretical to the real.”

A key advantage of the UNSW approach is that it reconfigured the ‘transistors’ used to define the bits in existing silicon chips, and turned them into qubits. “The silicon chip in your smartphone or tablet already has around one billion transistors on it, with each transistor less than 100 billionths of a metre in size,” said Dr Menno Veldhorst, a UNSW Research Fellow and the lead author of the Nature paper.

“We’ve morphed those silicon transistors into quantum bits by ensuring that each has only one electron associated with it. We then store the binary code of 0 or 1 on the ‘spin’ of the electron, which is associated with the electron’s tiny magnetic field,” he added.

Dzurak noted that the team had recently “patented a design for a full-scale quantum computer chip that would allow for millions of our qubits, all doing the types of calculations that we’ve just experimentally demonstrated".

He said that a key next step for the project is to identify the right industry partners to work with to manufacture the full-scale quantum processor chip.

Such a full-scale quantum processor would have major applications in the finance, security and healthcare sectors, allowing the identification and development of new medicines by greatly accelerating the computer-aided design of pharmaceutical compounds (and minimising lengthy trial and error testing); the development of new, lighter and stronger materials spanning consumer electronics to aircraft; and faster information searching through large databases.

Other researchers from UNSW’s School of Electrical Engineering and Telecommunications who contributed to the work include Dr Henry Yang and Associate Professor Andrea Morello, who leads the quantum spin control research team. Professor Kohei M. Itoh from Keio University in Japan provided specialised silicon wafers for the project.

Dzurak’s research is supported by the Australian Research Council via the Centre of Excellence for Quantum Computation and Communication Technology, the U.S. Army Research Office, the State Government of New South Wales in Australia, the Commonwealth Bank of Australia, and the University of New South Wales. Veldhorst acknowledges support from the Netherlands Organisation for Scientific Research. The quantum logic devices were constructed at the Australian National Fabrication Facility, which is supported by the federal government’s National Collaborative Research Infrastructure Strategy (NCRIS).

Note to media – news conference: A news conference is being held in Sydney this morning (10am, Tuesday 6 October) to coincide with publication of the Nature paper. A transcript and audio of the news conference will be available 24 hours later. To receive copies, contact Wilson da Silva.

ABOUT THE FACULTY OF ENGINEERING AT UNSW