Industry-funded research says existing models for potential maximum rainfall are out of date and suggests existing dams are at greater risk due to spillway inadequacy. 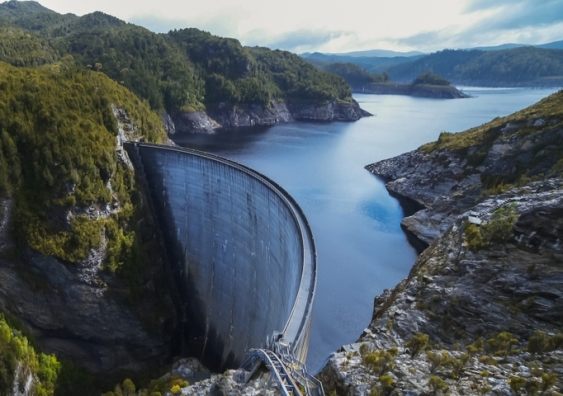 Dam owners regularly review the safety performance of their dams based on various extreme scenarios, with the new research highlighting the implications of a warming climate on maximum possible floods. Photo from Shutterstock

The rainfall model that engineers use to help them design critical infrastructure such as large dams and nuclear power plants needs to be updated to take into account climate change.

That is the conclusion of a paper published in Water Resources Research, which calculates that the ‘Probable Maximum Precipitation’ (PMP) estimates for 546 large dams across Australia are expected to increase between 14 and 38 per cent on average due to increasing atmospheric moisture.

The research suggests that existing dams will be at greater risk under climate change than what is currently assumed.

The researchers say existing models of PMP have not been updated for at least 20 years, and more recent meteorological events already show that the climate is warming and making storms more intense and more frequent.

“There are a lot of risks involved with dams given the amount of water they are holding back. Some of the worst floods around the world were due to extreme storms overwhelming a dam, causing it to fail and release a wall of water downstream,” says Johan Visser from UNSW Sydney’s Water Research Centre, who was lead author on the paper in collaboration with academics from the University of Melbourne.

“Engineers design dams to accommodate the largest flood event that could reasonably be expected to occur at a particular location, known as the Probable Maximum Flood – PMF. To work that out, you first need to calculate what is the greatest depth of rainfall meteorologically possible over that area in a certain amount of time, which we call the Probable Maximum Precipitation – PMP.

“The problem is that PMP calculation is based solely on historical data with no consideration for future climate conditions. This means that many large dams constructed decades ago were designed using information representative of a cooler climate.

“The purpose of this research was to analyse whether PMP estimates have changed over the last six decades and how these estimates might change in the future if we take into consideration a potential increase in atmospheric moisture due to known climate change,” says Mr Visser.

The current PMP guidelines for various timeframes and locations across Australia are collated and published by the Bureau of Meteorology.

The new research – which was funded by 10 of Australia’s leading water providers and dam owners from across Australia – reanalysed existing meteorological records and added in more up-to-date data from the last 20 years that was not previously included. The researchers then calculated potential changes in the future by incorporating the latest climate scenario modelling from the highly respected Coupled Model Intercomparison Project Phase 6 (CMIP6).

These climate models are used to explore how a range of global socioeconomic choices over the next century will affect greenhouse gas emissions.

Read more: Stormy times still ahead unless lessons are learnt from recent floods

The results of the paper show that PMP estimates have increased across Australia over the past 60 years and are expected to increase further due to predicted increases in atmospheric moisture. Based on the trajectory of the observed data, it was evident there would be a systematic increase in the PMP. This was confirmed using climate model simulations, indicating further increases for every climate scenario analysed.

For the worst-case future scenario, where green policies are not implemented and carbon emissions remain highest through to the year 2100, PMP estimates over large dam locations in Australia could increase by 38 per cent on average.

Even using the most conservative (low) estimates regarding emissions and subsequent climate change, the modelling suggests an average increase in PMP of 13 per cent across Australia.

The researchers say they have shown the current method of calculating PMP is likely outdated and does not take into consideration the potential consequences of current changes in atmospheric conditions, let alone those predicted into the future. 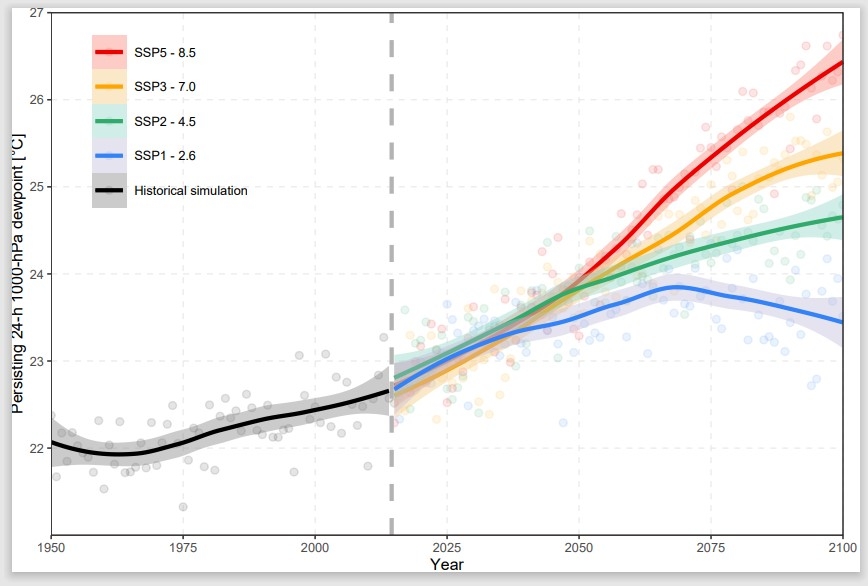 Results of the study show that maximum persisting dewpoints (input in PMP calculations) over Australia has increased over the historical record and is expected to increase further over the next 80 years for all modelled climate scenarios known as Shared Socioeconomic Pathways (SSPs), resulting in increased PMP estimates.

“For each 1-degree Celsius rise in temperature, the atmosphere can hold approximately 7 per cent more water,” says Mr Visser.

“We can already see in the observational record that extreme rainfall events and floods are becoming more frequent and more intense.

“The observational data shows that atmospheric moisture has been increasing over the historical record, and when you also factor in future climate projections from climate models, then you see that it’s projected to increase even further into the future.

“That is true for all the scenarios we analysed, even the most conservatively low estimates where there’s an increasing shift toward sustainable practices. So, under any future scenario, our estimate is that the PMP will increase.

“That is concerning because if PMPs are increasing, then our PMF estimates will also increase. Dam owners regularly review the safety performance of their dams under a wide range of failure scenarios, and this research reinforces the importance of ensuring that in the future these reviews consider the implications of a warming climate on extreme floods.

“One of the issues with the methodology presently used to estimate probable maximum rainfalls is that the last time it was updated in Australia was around the late 1990s or early 2000s. Therefore, 20 years’ worth of atmospheric moisture and rainfall data is already not included.

Professor Rory Nathan of the University of Melbourne, one of the lead collaborators involved in the research, said: “No country in the world has yet updated the operational procedures used to estimate PMPs to account for climate change, and this research provides the first evidence that these procedures need to be reviewed.

“It will take some time to work out the best way of using these findings to update industry practice, but we are facing a climate crisis and this research adds to the urgency with which we need to curb our carbon emissions.”

The researchers say it is hard to make a generalised recommendation with regards to potential upgrades to dam infrastructure across Australia based on the implications of the results of their new study.

That’s because the location, climate and design of each dam varies significantly, and individual risk and cost assessments would need to be done on a case-by-case basis. It also needs to be stressed that climate change is continually evolving, and the increase in extreme rainfalls associated with a warming climate is just one of the factors that dam owners need to consider when regularly reviewing the safety performance of their dams.

But they highlight the fact that previous amendments to PMP estimates have resulted in large-scale dam enhancements.

For example, the Warragamba Dam that supplies water to Sydney had its wall raised by 5.1 metres and an auxiliary spillway (18,000 m3/s capacity) constructed after hydrological studies in the 1980s showed the original spillway (10,000 m3/s capacity) was undersized and the risk of dam break was unacceptably high.

Professor Ashish Sharma, co-author of the paper from UNSW’s School of Civil and Environmental Engineering, said: “This is an important piece of research, not just for Australia but also across the world. The approach to PMP is developed and recommended by the World Meteorological Organization and is used more or less consistently by countries around the globe.

“Anybody who is planning to build a large dam needs to think 50 to 100 years ahead, and this research makes clear that future planning now needs to consider the future impacts of climate change on the plausible upper limit of rainfall extremes.”