Under a new code, rural landholders in NSW will be allowed to clear up to 25 metres of land outside their property boundary. This will be devastating for the wildlife that live or migrate there. 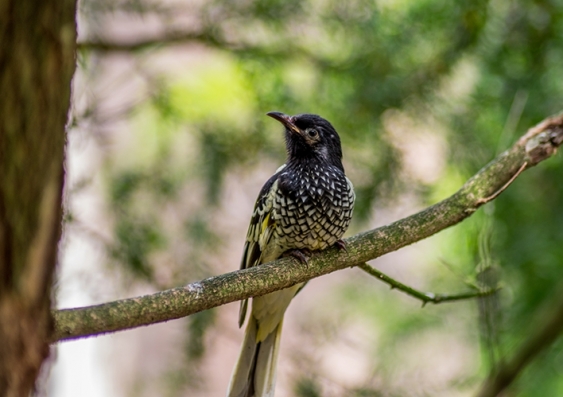 Regent honeyeaters are often found in vegetation along fences and roadsides. Photo: Shutterstock

What do koalas, barking owls, greater gliders, southern rainbow skinks, native bees, and regent honeyeaters all have in common? Like many native species, they can all be found in vegetation along fences and roadsides outside formal conservation areas.

They may be relatively small, but these patches and strips conserve critical remnant habitat and have disproportionate conservation value worldwide. They represent the last vestiges of once-expansive tracts of woodland and forests, long lost to the chainsaw or plough.

And yet, the NSW government last week made it legal for rural landholders to clear vegetation within 25 metres of their property boundaries, without approval. This radical measure is proposed to protect people and properties from fires, despite the lack of such an explicit recommendation from federal and state-based inquiries into the devastating 2019-20 bushfires.

This is poor environmental policy that lacks apparent consideration or justification of its potentially substantial ecological costs. It also gravely undermines the NSW government’s recent announcement of a plan for “zero extinction” within the state’s national parks, as the success of protected reserves for conservation is greatly enhanced by connection with surrounding “off-reserve” habitat.

Small breaks in habitat can have big impacts

A 25m firebreak might sound innocuous, but when multiplied by the length of property boundaries in NSW, the scale of potential clearing and impacts is alarming, and could run into the hundreds of thousands of kilometres.

Some plants, animals and fungi live in these strips of vegetation permanently. Others use them to travel between larger habitat patches. And for migratory species, the vegetation provides crucial refuelling stops on long distance journeys. 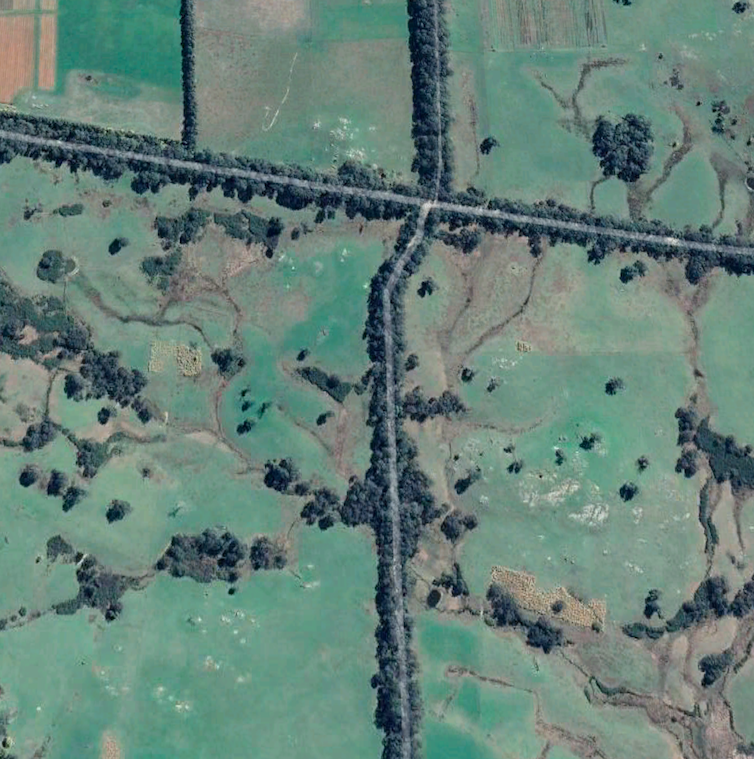 Roadside and fenceline vegetation is often the only substantial remnant vegetation remaining in agricultural landscapes. This section, in northeast Victoria’s Strathbogie Ranges, running north to south from the intersection, is home to high arboreal mammal diversity, including the threatened greater glider. Google Earth

Many of these species depend on tree hollows that can take a hundred years to form. If destroyed, they are effectively irreplaceable.

Creating breaks in largely continuous vegetation, or further fragmenting already disjointed vegetation, will not only directly destroy habitat, but can severely lower the quality of adjoining habitat.

This is because firebreaks of 25m (or 50m where neighbouring landholders both clear) could prevent the movement and dispersal of many plant and animal species, including critical pollinators such as native bees.

An entire suite of woodland birds, including the critically endangered regent honeyeater, are threatened because they depend on thin strips of vegetation communities that often occur inside fence-lines on private land.

For instance, scientific monitoring has shown five pairs of regent honeyeaters (50% of all birds located so far this season) are nesting or foraging within 25m of a single fence-line in the upper Hunter Valley. This highlights just how big an impact the loss of one small, private location could have on a species already on the brink of extinction.

But it’s not just regent honeyeaters. The management plan for the vulnerable glossy black cockatoo makes specific recommendation that vegetation corridors be maintained, as they’re essential for the cockatoos to travel between suitable large patches. 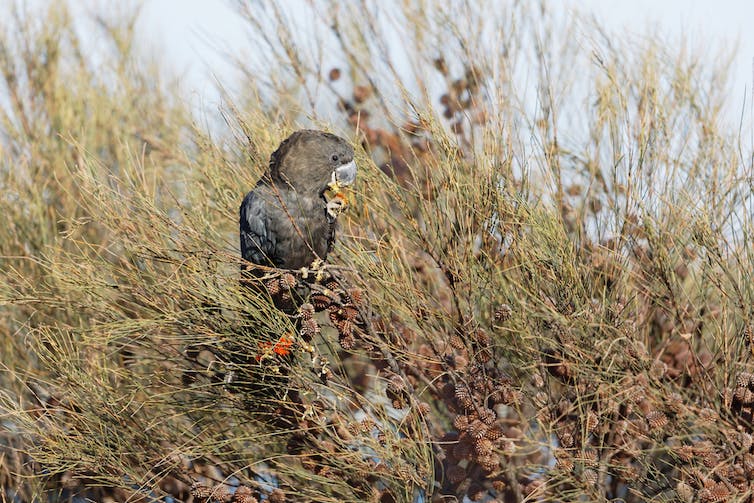 The new clearing code does have some regulations in place, albeit meagre. For example, on the Rural Fire Service website, it says the code allows “clearing only in identified areas, such as areas which are zoned as Rural, and which are considered bush fire prone”. And according to the RFS boundary clearing tool landowners aren’t allowed to clear vegetation near watercourses (riparian vegetation).

Even before introducing this new code, NSW’s clearing laws were an environmental disaster. In 2019, The NSW Audit Office found:

The data back this up. In 2019, over 54,500 hectares were cleared in NSW. Of this, 74% was “unexplained”, which means the clearing was either lawful (but didn’t require state government approval), unlawful or not fully compliant with approvals.

Landholders need to show they’ve complied with clearing laws only after they’ve already cleared the land. But this is too late for wildlife, including plant species, many of which are threatened.

Landholders follow self-assessable codes, but problems with these policies have been identified time and time again — they cumulatively allow a huge amount of clearing, and compliance and enforcement are ineffective.

Vegetation along roadsides and close to fences can be critical habitat for greater gliders.

We also know, thanks to various case studies, the policy of “offsetting” environmental damage by improving biodiversity elsewhere doesn’t work.

So, could the federal environment and biodiversity protection law step in if habitat clearing gets out of hand? Probably not. The problem is these 25m strips are unlikely to be referred in the first place, or be considered a “significant impact” to trigger the federal law.

The code should be amended

Nobody disputes the need to keep people and their assets safe against the risks of fire. The code should be amended to ensure clearing is only permitted where a genuinely clear and measurable fire risk reduction is demonstrated. 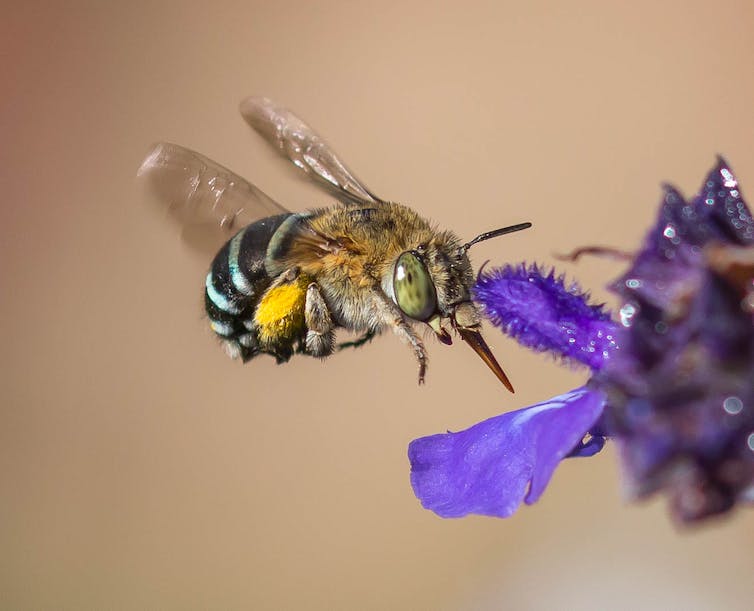 Many native bees, like this blue-banded bee (Amegilla sp.), will use the nesting and foraging resources available in remnant vegetation patches. Michael Duncan

Granting permission to clear considerable amounts of native vegetation, hundreds if not thousands of metres away from homes and key infrastructure in large properties is hard to reconcile, and it seems that no attempt has been made to properly justify this legislation.

We should expect that a comprehensive assessment of the likely impacts of a significant change like this would inform public debate prior to decisions being made. But to our knowledge, no one has analysed, or at least revealed, how much land this rule change will affect, nor exactly what vegetation types and wildlife will likely be most affected.

A potentially devastating environmental precedent is being set, if other regions of Australia were to follow suit. The environment and Australians deserve better.