An ancient bat species has been discovered in New Zealand by UNSW palaeontologists, suggesting its descendants have been present in the country for at least 16 million years. 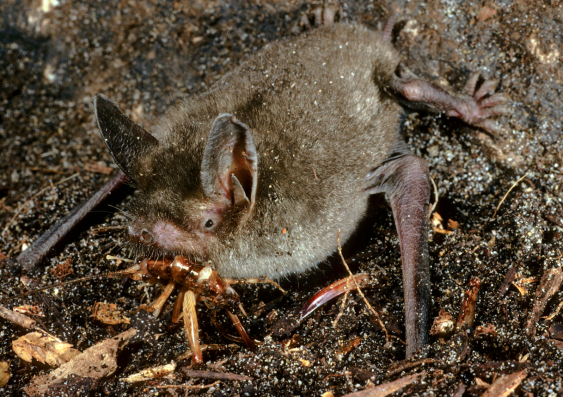 The living relative of an ancient bat species discovered in New Zealand. Mystacina tuberculata is known as a burrowing bat because it forages for food on the ground. (Credit: Rod Morris)

Fossilised remains of a new bat species, which lived 16 million years ago, walked on four limbs and was three times larger than today’s average bat, have been discovered in New Zealand.

The fossils were found near Central Otago on South Island, in sediment left over from a vast prehistoric body of water known as Lake Manuherikia, which was part of warmer subtropical rainforest during the early Miocene era, between 16 and 19-million-years-ago.

The new species, Mystacina miocenalis, was described today in the journal PLOS One, and is related to another bat, Mystacina tuberculata, which still lives in New Zealand’s old growth forests.

“Our discovery shows for the first time that Mystacina bats have been present in New Zealand for upwards of 16 million years, residing in habitats with very similar plant life and food sources,” says lead author and vertebrate palaeontologist, Associate Professor Suzanne Hand from UNSW Australia.

New Zealand’s only native terrestrial mammals are three species of bat, including two belonging to the Mystacina genus – one of which was last sighted in the 1960s. They are known as burrowing bats because they forage on the ground under leaf-litter and snow, as well as in the air, scuttling on their wrists and backward-facing feet, while keeping their wings tightly furled.

These bats were believed to have an ancient history in New Zealand, but until now, the oldest fossil of a Mystacina bat in New Zealand was from a cave in South Island, dating to 17,500 years ago. This latest discovery forces a rethink of when these peculiar, walking bats first crossed the ditch, arriving from what is present-day Australia.

“This helps us understand the capacity of bats to establish populations on islands and the climatic conditions required for this to happen,” says Associate Professor Hand, from the School of Biological, Earth & Environmental Sciences.

“Bats are important pollinators and seed dispersers that keep forests healthy. Understanding the connectivity between the bat faunas of different landmasses is important for evaluating biosecurity threats and conservation priorities for fragile island ecosystems.”

The new species has similar teeth to its contemporary relative, suggesting a broad diet that included nectar, pollen and fruit, as well as insects and spiders. Limb bones found in the deposit also showed similar structures specialised for walking. 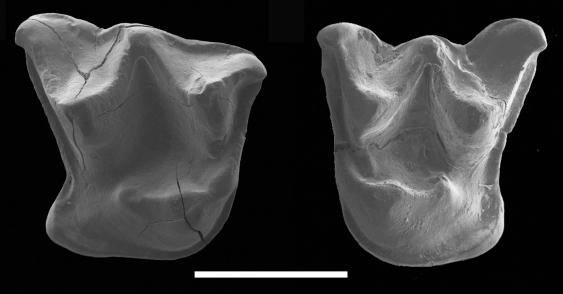 Where they differ is body size: at an estimated 40 grams, the fossil bat would have been roughly three times heavier than its living cousin, and the average weight of more than 900 living bat species.

“The size of bats is physically constrained by the demands of flight and echolocation, as you need to be small, quick and accurate to chase insects in the dark,” explains Associate Professor Hand.  “The unusually large size of this bat suggests it was doing less in-flight hunting and was taking heavier prey from the ground, and larger fruit than even its living cousin.”

The team also found a diverse array of plant, animal and insect fossils at the site, which shows that the 16-million-year-old subtropical ecosystem bore resemblance to the more temperate one that exists today.

“Remarkably, the Miocene ecosystems associated with the fossil bat contain the kinds of trees used today by Mystacina for its colonial roosts,” says Associate Professor Hand. “Most of its food plants are also represented, as are terrestrial arthropods including a variety of beetles, ants and spiders, which these bats continue to hunt on the ground.”

The Lake Manuherikia site has been a treasure trove for palaeontologists over the years, producing New Zealand’s oldest frogs, lizards and land birds, as well as its only crocodiles and terrestrial turtles.