Opinion Fruit bats are the only bats that can’t use echolocation. Now we're closer to knowing why

Echolocation evolved multiple times in bats over millions of year. Yet the earliest bat ancestors probably didn't have this skill — or if they did, it was likely very primitive. 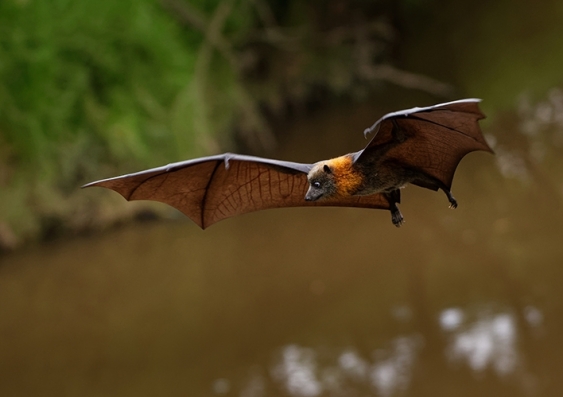 To navigate using echolocation, bats produce high-frequency calls in their larynx and emit these through their nose or mouth. Photo: Shutterstock

Scientists have found another piece in the puzzle of how echolocation evolved in bats, moving closer to solving a decades-long evolutionary mystery.

All bats — apart from the fruit bats of the family Pteropodidae (also called flying foxes) — can “echolocate” by using high-pitched sounds to navigate at night.

An international study led by us, published today in Current Biology, has shown how the capability for sophisticated echolocation not only evolved multiple times in groups of bats, but also that it never evolved in fruit bats.

The remarkable sounds of bats

To navigate using echolocation, bats produce high-frequency calls in their larynx (voice box) and emit these through their nose or mouth. These calls, usually made at higher frequencies than humans can hear, echo off objects and bounce back.

From this feedback, bats can extract information about the spatial and textural properties of their surroundings.

For three decades, scientists have tried to understand how echolocation evolved in bats and why this adaptation didn’t extend to fruit bats. So far, they’ve struggled to reach a consensus.

Some evolutionary biologists think fruit bats could once echolocate like their modern counterparts, but at some point lost this capability. Others propose fruit bats never acquired this trait in the first place and that it evolved several times in different bat groups.

Uncovering the history of bat echolocation was always going to be a hard task. There are more than 1,400 species of bat, making up about a quarter of all mammal species on Earth. As such, they come in a remarkable range.

However, bat fossils are notably scarce and fragmented. Scientists lack the specimens needed to reconstruct the 65-million-year evolutionary history of bats.

Also, the genetic information of today’s echolocating bat species has done little to help us understand how the sonar-like system actually works.

Read more: Our laws failed these endangered flying-foxes at every turn. On Saturday, Cairns council will put another nail in the coffin

We took a different approach. Rather than focusing on bat genes or fossils, we examined the very early development of their ear and throat bones.

Evolutionary studies have shown that if a group of species ends up losing a trait its ancestors possessed, not all aspects of the trait are completely lost. Instead, the trait often starts to develop in the very early stages of life, but doesn’t progress.

So if echolocation was present in the common ancestor of all bats, we would expect modern fruit bats to show some developmental trace of this in their ear and throat development.

Our research group, which included biologists from City University of Hong Kong, University of Tokyo and the Vietnam Academy of Science and Technology, studied hundreds of bat embryo specimens from all around the world.

We used a modern imaging method to digitally reconstruct the soft tissue structure of the embryos in microscopic detail. We compared fruit bats to echolocating bats and also non-echolocating mammals, such as mice.

Our analysis revealed fruit bats were indistinguishable from non-echolocating mammals in all aspects of their early ear bone development.

There were also no features which were similar to those observed in bats that do have sophisticated echolocation capability. In other words, there was no evidence to suggest fruit bats would ever have been able to echolocate.

This raised several questions for us. Does this mean the common ancestor of all bats didn’t have the echolocation skills afforded to future bats? This is a possibility.

Alternatively, this common ancestor might have only had a very primitive version of echolocation. If so, it may have looked and sounded strikingly different to what we see in today’s sophisticated echolocators.

Unfortunately, we can’t know for sure which is correct. Pteropodids have the most incomplete fossil record of all bat lineages, so we can’t study how their ear bones changed over time.

Our team also discovered the two major groups of sophisticated bat echolocators, Rhinolophoidea and Yangochiroptera, have different patterns of ear and throat development to one another. This suggests they evolved their sonar independently.

This conclusion also fits in with the latest insights from bat genome sequencing, which indicate that if the ancestor of all bats did echolocate, this was likely some kind of primitive echolocation — not the deft laryngeal echolocation found in modern bats.

The next step will be to combine insights from developmental analysis with bat genomic data.

By studying how the hearing-related genes of bats are expressed during early development, we could find out whether fruit bats completely erased a primitive echolocation system present in an ancestor, or whether it was ever there at all.

Read more: Some bats find their way around like people do: why this is useful to know