Ghosts of predators past: 3000 years of evolution with dingoes matters to bilbies

Wild bilbies have learnt to avoid an old enemy, but are less cautious of a newer predator, new research suggests. 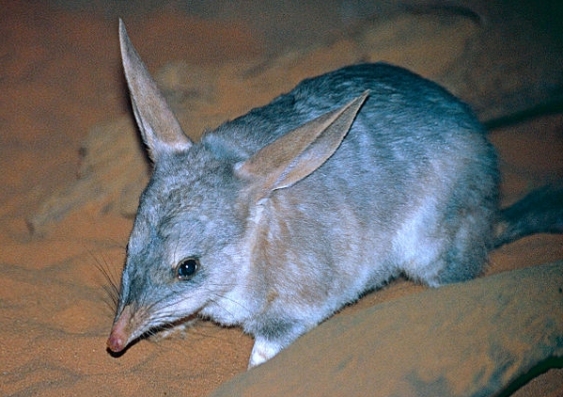 Wild bilbies are more reluctant to leave their burrows when dog faeces has been placed nearby than when they are presented with the faeces of feral cats, which are major introduced predators of these small native Australian marsupials.

The finding by a UNSW Sydney-led team of scientists supports the idea that bilbies are hard-wired to avoid dogs as a result of co-evolution with dingoes, which were introduced to the mainland more than 3000 years ago by arriving people.

The study, led by UNSW PhD student Lisa Steindler, is published in the journal Animal Behaviour.

The team studied bilbies that had never been exposed to dogs or other introduced predators. The bilbies were in the Arid Recovery Reserve in South Australia – a large fenced enclosure free of dingoes, dogs, cats, foxes and rabbits for the past 16 years.

“Our results suggest that dingoes should now be regarded as a native species, because of this innate ability of native prey to recognise dogs as threats,” said the study senior author, UNSW Associate Professor Mike Letnic.

“The study supports the ‘ghosts of predators past’ hypothesis, that a prey’s ability to respond to the odours and images of predators increases with the length of time they have co-existed.

“Bilbies have shared more than 3000 years of evolutionary history with dingoes and dogs, but less than 200 years with cats, which appears to be long enough for them to recognise dog scent.”

Working out how naïve native prey respond to threats is important for understanding why native mammals numbers have declined.

The researchers attached tracking devices to 18 wild bilbies and set up cameras near the entrance to their burrows.

When dog faeces was placed nearby, the bilbies spent much more time partially emerged from their burrows, with just their heads and shoulders sticking out, than when they could smell the faeces of deadly cats or harmless rabbits nearby.

Dog faeces was used for the experiment, rather than dingo faeces, because they were chemically indistinguishable.

The findings do not support the hypothesis that native animals respond to similar clues from long-known and novel predators, such as the odour of similar chemicals in the faeces of placental mammals such as cats and dogs.

“Working out how naïve native prey respond to threats is important for understanding why native mammals numbers have declined and why some attempts to reintroduce locally extinct animals have failed,” Ms Steindler said.

“Since European settlement the distribution of bilbies has decreased dramatically, with them now occupying just 20 per cent of their former range.”

Watch a video of the bilbies