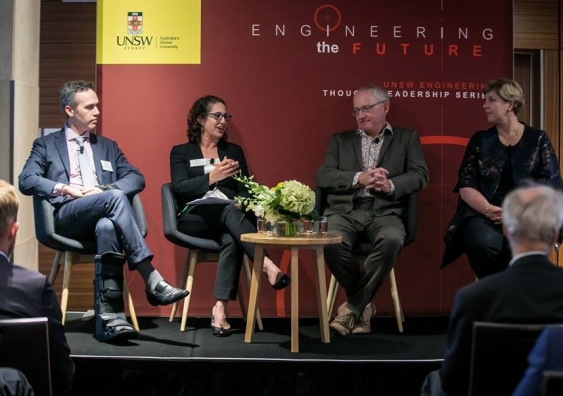 Last week, the UNSW Faculty of Engineering launched the inaugural event in its Thought Leadership series, “Engineering the Future: Q&AI” for a gathering of UNSW Alumni at the Hilton Hotel.

Introducing the event, UNSW Dean of Engineering, Professor Mark Hoffman said the aim of the Q&A evening was a fostering of original discussion around issues of global significance for the engineering profession.

“UNSW Engineering is Australia’s largest and longest standing engineering faculty. While we’re proud of our history, it’s the future that we’re really focused on.

“It’s our view that engineering is a service profession, and the whole purpose of technology is to support society. Artificial intelligence is enabled by technology and has far reaching implications.”

Professor Hoffman introduced three speakers on the Q&A panel who would provide unique takes on artificial intelligence (AI) and what role it already plays in society, where it is headed, and whether its future is one that should be celebrated or viewed with caution.

Scientia Professor Toby Walsh from UNSW’s School of Computer Science and Engineering is one of the leading academic minds on artificial intelligence and provided the session with insights on how AI is and will be integrated with humans at work and play.

Robyn Denholm who is chief financial officer and head of strategy at Telstra represented the perspective from the private business sector, while Human Rights Commissioner Ed Santow looked at AI and how it could be used advantageously to improve human rights while identifying areas where it may give us cause for alarm.

The event was facilitated by UNSW Faculty of Law Professor Lyria Bennett Moses who is also director of the Allen’s Hub for Technology, Law and Innovation who immediately asked the panel to define artificial intelligence.

Professor Walsh started by saying that many of his colleagues say AI is “all the things we can't yet solve with a computer”.

“But it's not one thing, it's a collection of tools and technologies that when humans do them, requires some sort of thinking - all the way from perception and perceiving the world, understanding the world, to reasoning about the world and learning from it, and finally acting in that world.”

Ms Denholm saw AI as a direct outcome of how humans interact digitally with the world.

“We digitise so much in the world today, both in the internet and also records, but also as we deploy sensors all round the world,” she said. “I think we need to have something more than the human brain that can do something with it all that information”.

Ed Santow compared AI with modern medicine, in that it is something that is not bounded by a clear scientific consensus about precisely what it means. But he did note two characteristics that distinguished it.

“The first is the ability to wrangle large amounts of data. And the second is the capacity to do so in a way that draws inferences or links like a human might do,” Mr Santow said.

AI and our jobs

The panel was asked whether AI was a threat to jobs and if so, will the flow-on effects of being replaced by machines impact human well-being.

Professor Walsh offered an optimistic view. While acknowledging the enormous social upheaval and individual pain brought about by disruptive influences like AI, Professor Walsh said we should be mindful of the great positives AI can bring to the world of work.

“When jobs get automated, I say to people, we should be celebrating because the job we're replacing is repetitive, dull, dirty or dangerous and we should probably never have been getting humans to be doing that job in the first place,” Professor Walsh says.

“But we also make sure those people feel like they have a useful purpose and they're supported in society and can live in that new world.”

However, Professor Walsh said that as social animals, humans will always prefer to be dealing with other people, and those jobs that are people facing should expect to survive.

Mr Santow mused that some jobs will never be taken by machines and emphasised the value of the human experience.

“The World Economic Forum did an analysis which types of jobs are safest and which are most vulnerable,” he said. “The one that came out on top was choreographer.”

However, on the question of human rights, Mr Santow said human historical bias continues to exist when used in an AI setting. He provided the example of NSW Police using AI to help target suspects from a criminal database

“Historically, indigenous people in Australia have been prosecuted for essentially what are crimes of poverty, and that can lead to an irrational inference that an AI powered system might draw. Namely, that people who are indigenous are more likely to commit a crime and so should be policed more aggressively.”

Professor Walsh wondered whether this could actually give us better human rights, because computers might even reveal more starkly the inherent biases in a society.

Ms Denholm agreed with this idea. “Human decision-making process does have inherent biases, and the best way to eliminate it is actually to expose it,” she said.

Another benefit she saw was what occurred in her job on a daily basis. Artificial intelligence was freeing up her company’s cyber security team to concentrate on real threats to a telecommunications network. She said every day at Telstra, the company experiences billions of digital interactions with its network and has to weed out the serious threats from benign, everyday user activity.

“There are about 3 billion events a day that someone needs to analyse to see if they are bad actors,” she said.

“So the artificial intelligence used by the cyber team gets those 3 billion things down to 1000 things a day that we can analyse.

“That's an example of AI doing something good so that we protect the nation in terms of cyber events.”

Sign up with UNSW Events to find out about upcoming events in this series.