Walter Munk's contribution to oceanography has earned him the nickname "Einstein of the ocean". Paul Spence and Shane Keating recap his achievements as he turns 100. 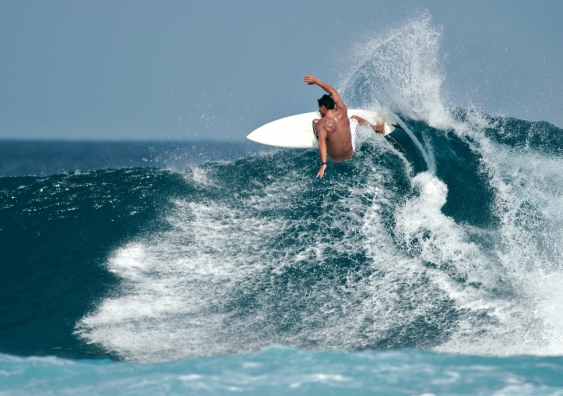 As dawn washes over Bondi Beach, you can see the surfers beyond the break, gently rising and falling on their boards. They gather like this when the surf forecast tells them a big swell is rolling in, carrying energy from a ferocious Antarctic storm thousands of kilometres away.

From Bondi to Bundoran, Pipeline to Mavericks, surfers around the world depend on the surf forecast to catch the perfect wave. Its inventor, Walter Munk, is 100 today – yet few surfers know his name, despite the debt of gratitude they owe him. 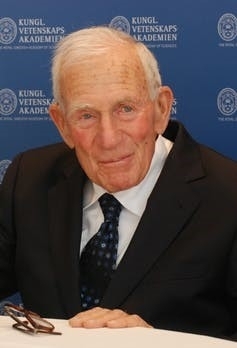 ‘Einstein of the ocean’

Munk might be under-appreciated in surfing circles, but he’s a big deal in ocean science. He has been described as the “greatest living oceanographer” and the “Einstein of the ocean”.

His list of accolades is astounding. There is a unit of measurement named after him: the “Munk unit”. There’s a species of ray called Mobula munkiana. There’s even a Walter Munk Award for outstanding contributions to oceanography, which of course he has won.

Munk has made fundamental contributions to our understanding of ocean circulation, geology and climate change. But perhaps his most influential work is the science of wave prediction, which he developed while still a doctoral student in California.

After graduating from Caltech in 1938, Munk began a PhD with renowned Norwegian oceanographer Harald Sverdrup in the sleepy seaside town of La Jolla. Distressed by Germany’s annexation of his native Austria, Munk became a US citizen and joined the war effort, first as an army private and later with the US Navy Radio and Sound Laboratory.

While observing Allied troops training for an amphibious invasion of Northwest Africa, Munk noticed that waves were pummelling the landing craft as they approached the beach. He immediately called Sverdrup, and together they developed techniques for predicting ocean waves and surf conditions for amphibious warfare.

Their methods were so successful that the Allied forces used these to predict wave conditions for the D-Day landings at Normandy. Based on those predictions, General Eisenhower delayed the operation, the largest naval invasion in history, until June 6, 1944. Undoubtedly, Munk’s research saved thousands of Allied lives and helped bring about the end of World War II.

Waves across the Pacific

Thus began a lifelong fascination with ocean waves. In 1963 Munk, then a professor at the Scripps Institution of Oceanography, led a team of scientist studying how swells generated by Antarctic storms travel more than 16,000km across the Pacific Ocean.

The team set up stations to measure the waves as they travelled in a great circle from New Zealand to Alaska. Munk and his family spent more than a month in American Samoa for the experiment, monitoring pressure sensors mounted on the ocean floor and recording data on paper tape punched with holes.

The experiment yielded a surprising discovery. The waves showed very little decay in energy on their journey across the Pacific. The biggest change was a shift in the observed period of the wave – that is, the time between passing crests. Munk’s team found that the period increased as the waves moved northwards.

This happens because ocean waves are dispersive, meaning that the speed of the wave depends on the period. Long-period waves move more rapidly, so they run to the front of the pack, while shorter-period waves lag behind. The phenomenon is well known to surfers, who experience this dispersive ordering as a gradual shortening of the time between sets of waves.

In a 1967 documentary that Munk made with his wife Judith about the experiment in the Pacific, he describes how an orderly ocean swell can emerge from the chaos of an Antarctic storm. Using the analogy of tossing a handful of pebbles into a pond, Munk describes how the water surface is initially broken up in “lovely confusion”. But eventually a steady procession of ripples can be seen spreading outwards from the point of impact – regular and predictable.

Munk’s pioneering work on ocean swells, together with his wartime research on wave prediction, gave birth to the science of surf forecasting. In 2007 his contribution to surfing was formally recognised by the Groundswell Society, a surfing advocacy group. Munk later recalled:

I have been fortunate in receiving the recognitions that are traditional in a scientific career. But none gave me as much unexpected pleasure as this recognition by the Groundswell Society. I was utterly delighted.

After more than eight decades of ocean science, Munk shows no signs of slowing down. He is still hard at work, researching and speaking at international conferences. As the worldwide oceanographic community prepares to celebrate his centenary, Munk’s enthusiasm for discovery has not dimmed.

In an interview this month, Munk revealed what keeps him going. “More enthusiasm than knowledge. That’s been the key of my career — to get excited before I understand it.”