When the next Mars Exploration Mission is launched in 2020, UNSW's Martin Van Kranendonk will have helped select the site where the expedition’s robotic rover will touch down. 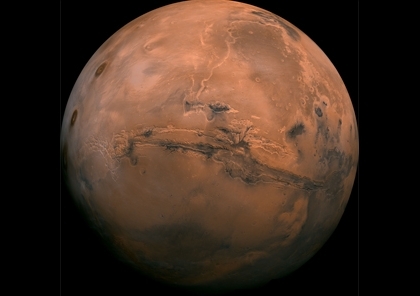 When the next Mars Exploration Mission is launched in 2020, UNSW Professor Martin Van Kranendonk will have the satisfaction of knowing he helped select the site where the expedition’s robotic rover will touch down.

Professor Van Kranendonk, director of the Australian Astrobiology Centre in the School of Biological, Earth and Environmental Sciences, was the only Australian scientist to attend a recent NASA workshop in the US where participants voted to choose the top eight possible landing sites for the expedition to the red planet.

“It was one of the best experiences of my career,” says Professor Van Kranendonk, who will give a talk next week at UNSW about the event.

“More than 200 people ranging from NASA scientists and engineers to planetary scientists and graduate students gathered in Los Angeles to debate which of 30 sites offered the best chance of finding evidence of past life on Mars.

“The whole process was a model of democracy. The votes were tallied by raised hands and every person’s vote counted equally. It was absolutely transparent and quite exciting. During the voting you got a feeling right away whether a site was going to be in or out.”

Each site was judged on how it met five mission objectives, including the geological history of the site as assessed from instruments on board orbiting spacecraft or, in one case, from previous rover investigations.

Other criteria were whether a site was likely to have harboured ancient life, and if it contained a good suite of rock samples that could be collected and stored on the surface for possible future transport to Earth, where more detailed analyses could be conducted.

“There are not many geologists involved in planetary science, so I felt I had an important role to play, and was able to make some valuable comments,” says Professor Van Kranendonk, who studies some of the earliest evidence of life on Earth in 3.5 billion year old rocks in the Pilbara region of Western Australia.

“It was also exciting that my top two preferred landing sites for the Mars mission were the top two chosen by the room. It gives me hope that the mission will discover evidence of past life there. ”

The top ranked site is Jezero Crater, a 45-kilometre wide basin that was once home to an ancient Martian lake in which life may have developed.

The second site was at Gustav Crater, now called Columbia Hills, where the previous rover Spirit uncovered some siliceous rocks deposited from a hotspring, including very unusual opaline silica nodules with finger-like protrusions that have a direct analogue on Earth from the Atacama Desert in Chile, formed in the presence of microbes.

The final decision on a site is expected to be made by NASA within the next three years.

Professor Van Kranendonk will give a talk about his experiences on Wednesday 16 September at 12 noon, Biosciences Building D26, Roundtree Room 356.