Opinion How digital media blur the border between Australia and China 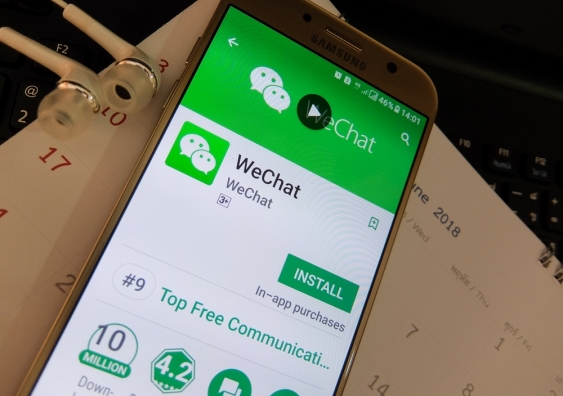 WeChat is an all-in-one social media platform that combines services such as those offered by WhatsApp, Facebook, Uber and Apple Pay. Image from Shutterstock

In this series Hacking #auspol we explore whether covert foreign influence operates in Australia, and what we can do about it.

In September, the ABC website was blocked from being accessed inside China. The reason given was the ABC’s “aggressive” reporting on China. Prime Minister Scott Morrison responded by saying that:

But things are a little more complex than that, particularly when it comes to news published on Chinese social media platforms. Apps like WeChat (known as Weixin 微信 in China) are widely used in Australia by the Chinese diaspora (people of Chinese descent now living in countries other than China).

Social media platforms like WeChat are subject to controls on what they may publish within China, but it’s unclear whether similar controls are placed on content published outside China. Tencent – the company that operates WeChat – wants to expand the adoption and use of its Official Account platform internationally. Some researchers suggest WeChat operates a “one app, two systems” model, with one policy operating in China and another internationally.

As part of our ongoing research, we present some initial findings from an analysis of news targeted at Chinese-language audiences in Australia. Over 18 months we used digital tools to capture news stories in both Australian-based WeChat Official Account news channels, and SBS Mandarin digital news channels. We then compared their content to see if news disseminated via WeChat could be subject to influence by the Chinese government.

The Special Broadcasting Service (SBS) makes news available to Australia’s Mandarin-speaking population via in-language content that appears on TV, radio and online. While SBS is funded by the Australian government, it operates with editorial independence.

WeChat is an all-in-one social media platform that combines services such as those offered by WhatsApp, Facebook, Uber and Apple Pay. It also acts as a news service via numerous WeChat Official Accounts (also called Public Accounts). These accounts allow government agencies, business corporations, and social organisations to post and distribute news stories to subscribers. WeChat users registered outside China are estimated at 100-150 million.

Our content analysis focused on the three most prominent “Official Account” WeChat news providers publishing Mandarin-language news in Australia: Sydney Today, ABC Media and We Sydney. It’s hard to verify exact subscriber numbers for these accounts, but they are estimated to each have more than 100,000 subscribers.

What the data shows

Data were collected between 1 January 2016 and 1 August 2017. This timeframe includes two Federal government budget speeches, and the 2016 double dissolution election. Given the amount of data, we used a common analytic technique called topic modeling to analyse the content, which categorises stories according to theme.

We found that coverage of terrorism, and crime and justice matters increased on both WeChat and SBS during the data collection period. But when it came to stories about China, the coverage was markedly different. SBS paid far more attention to Chinese politics and Chinese foreign affairs than WeChat accounts – and that disparity has intensified since February 2017. 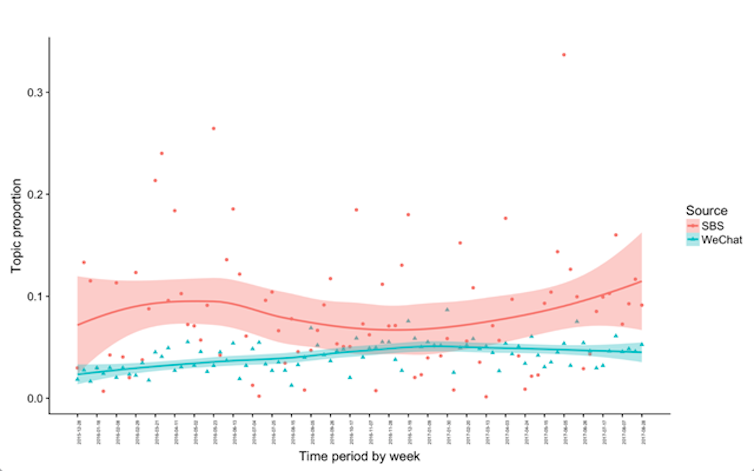 Stories related to terror attacks and criminal cases. Shaded bands are confidence intervals, which denote the range of possible variance on either side of the line. Author provided 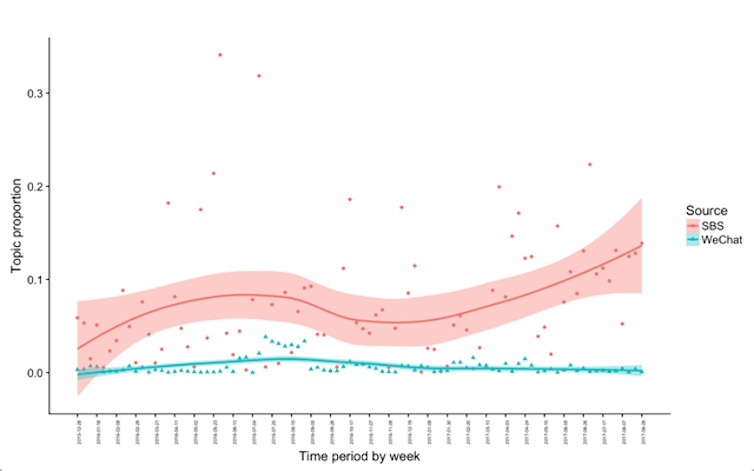 Stories related to Chinese politics and foreign relations. Shaded bands are confidence intervals, which denote the range of possible variance on either side of the line. Author provided

More tellingly, none of the WeChat channels has published a single article on Chinese politics and foreign affairs from March 2017 until the end of the collection period. This was around the time new measures were ramped up to enhance control of WeChat content in the lead up to Qingdao Summit, and ahead of the 19th Party Congress. In October 2017, the Chinese government introduced new regulations that made Public Account and group chat account holders responsible for what is said by other users on their account pages (this included Official Accounts).

Even before the Sydney based WeChat channels stopped covering Chinese politics, of the 37 articles on this topic, 32 had similar content to news reports from China’s domestic news agencies, which tend to reflect the position of the Chinese government.

Comparative findings suggest that the differing content on WeChat and SBS could have markedly different effects on readers. For instance, SBS Mandarin content might serve to give readers a sense of informed civic inclusion and democratic participation in Australian society. On the other hand, the WeChat content might be more likely to emphasise stronger cultural ties to the homeland by creating “distraction and diversion” from sensitive political topics. The near absence of political coverage focuses the attention of WeChat readers on celebrity gossip and other entertainment topics rather than the politics of the People’s Republic of China.

This practice has been described as a form of “porous censorship”. While readers could seek out information on China from other sources, it takes time and effort to do so. The “flooding” of the daily news feed is effectively more of a tax than a ban on information – especially considering WeChat is a primary source of information for many Chinese living in Australia.

Even without specific coordination, WeChat news channels may advance strategic interests of the Chinese government in this way, signalling a new mechanism of foreign influence.

In its 2017-18 Annual Report, the Australian Security Intelligence Organisation (ASIO) expressed concerns about foreign powers secretly manipulating the opinions of Australians to further their own aims. The report specifically suggested that ethnic and religious communities have “been the subject of interference operations designed to diminish their criticism of foreign governments.”

The Chinese government has a keen interest in monitoring its growing diaspora populations, and that includes the content of diaspora media channels, including social media channels.

Influence campaigns on social media may take many forms. The most familiar is the kind of direct manipulation we’ve seen with Russian campaigns that aim to sow division among a foreign population. A less direct route is to ensure that legitimate news sources only report news that serve the strategic objectives of the government in question. Our study focuses on the second kind.

Who is the Chinese diaspora?

The Chinese government has said it considers those of Chinese descent abroad to be the nation’s diaspora. The 2016 census identified 1.2 million people of “Chinese ancestry” in Australia, with 41% born in China.

It’s important to remember that while idea of “Chineseness” suggests a homogenous identity, ethnicity and culture, in reality this group is made up of different experiences, views and political allegiances. Some people in this group may not have any particular affiliation with China. Nevertheless, they are part of the group the Chinese government has suggested is within its sphere of influence.

A key component of the diaspora is students. There may be between 150,000-200,000 thousand students from China in the Australian education system. Like the diaspora as a whole, the experiences of Chinese students in Australia are complex and not homogeneous.

University of Melbourne researcher Fran Martin argues for a more nuanced approach to Chinese international students lived experience of social media in Australia, pointing out that there is no singular experience of free speech in the Chinese student diaspora. And Xinyu Zhao, a PhD student at Deakin, argues that Chinese students are as clever about avoiding oversight of senior relatives in their use of social media as any other young person.

Social media have led to a proliferation of unofficial spaces of communication online, which has created challenges for the Chinese government’s efforts to regulate the content of online communications.

Social media companies in China are required to censor posts which the Chinese government identifies as “illegal”, and self-censorship among users is encouraged. Examples of illegal content includes phrases such as “Tiananmen June 4”, “free Tibet” and “Falun Gong”. The flow on effect of regulation and influence on these platforms when they are used outside China’s borders is more complex.

The Australian Defence Department is concerned enough about the possibility of Chinese censorship and surveillance being enabled via WeChat that it has banned the app from work phones, pending security investigation.

There is a long history of countries attempting to impact the political discourse in other nations. This might involve various forms of lobbying and support for political parties and politicians, support of social and political movements, or the state-supported diffusion of cultural objects and information.

But not all state broadcasters are instruments of government propaganda or subject to government editorial control. Few in the West would decry the BBC and its various foreign language services, which have editorial independence from the British government. Indeed, the BBC often reports critically on British government activities.

WeChat is becoming an increasingly important media forum for Australian elections, with politicans beginning to use it to reach Chinese communities online. Some suggest that WeChat was important during the 2016 federal election in Victorian communities. And in 2017 Shadow Treasurer Chris Bowen was the first Australian politician to use WeChat Live.

Digital diasporas are accessible for potential foreign influence, and Chinese language social media in Australia are increasingly a focus for local political parties. This dynamic is changing the way we chat about politics.

Whacking the mole: how Australia scrambles to regulate Chinese technology