Opinion How to kill a river system

The tragedy of the Murray-Darling river system is man-made, writes Richard Kingsford. 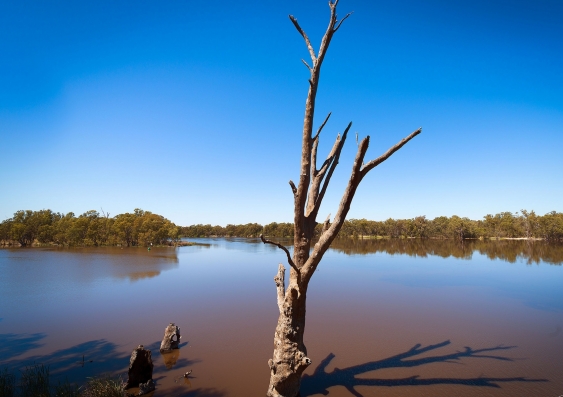 OPINION: The sorry state of Australia's mighty Murray-Darling rivers is a tragedy entirely of our own making, not the result of cyclical droughts, as so often claimed.

It's now five years since $13 billion was allocated by the federal government to save this critical, precious river system and the surrounding environment. Yet, little has been done to alleviate the intense competition over access to water, nor to provide clear data for good management of the Murray-Darling Basin's water flows. In fact, as revealed on Monday night's Four Corners program, there is much we don't know about water taken from the basin's rivers. And, New South Wales and Victoria are dragging their feet – arguing against the buyback of water for the environment and undermining the environmental provisions of the Basin Plan.

How did it come to this? Last century, the waters of the Murray-Darling rivers were notoriously over allocated by overzealous government water agencies. So many dams were built by tax payers that they could capture 130 per cent of the average annual flow of all the system's rivers. Recently some farmers argued that a new dam on the Belubula River, near Orange, would fix this. But building dams doesn't get you more water in the same way that opening a bank account doesn't get you more money. Nothing flies in the face of the intent of the Basin Plan than a new dam.

We seem to have forgotten the dire state of the environment that drove the reforms. Forests of river red gums, black box eucalypts and coolibah trees dead, denied the water flows they relied on by irrigation.

Meanwhile, we seem to have forgotten the dire state of the environment that drove the reforms. Forests of river red gums, black box eucalypts and coolibah trees dead, denied the water flows they relied on by irrigation. Waterbird numbers have plummeted, half the native fish species are now threatened, blue-green algal blooms are increasing, and the Lower Lakes was once taken over by sulfuric acid and salinity. Communities have also been short changed; Aboriginal communities despairing of a dying Darling and graziers lamenting the transfer of their wealth upstream, as irrigation diverts the water that once provided the floods to grow grass for cattle. Tourism too, has been hit hard.

The Millennium Drought, in 2002-2009, exposed the basin's alarming fragility. Country towns and Adelaide ran out of water and irrigators bulldozed fruit trees, prompting the federal takeover of the Murray-Darling with a new Water Act 2007, under prime minister John Howard, supported by the then Basin Plan architect, water minister Malcolm Turnbull. The Plan was adopted in 2012 by Julia Gillard's government, resulting in an independent national Murray-Darling Basin Authority, deftly side-stepping state governments' Constitutional responsibilities for water.

The Australian government invoked its international obligations for wetlands of international importance and migratory shorebirds, like the sharp-tailed sandpipers which fly to and from the Murray-Darling Basin wetlands to Russia and China each year. More than $13 billion was put on the table to fix the river system's many problems—almost half of which was allocated to improving irrigation efficiencies and giving saved water back to the environment, and almost a quarter to buying back water for the environment from willing irrigators. A target was established to return 3200 megalitres of water to the environment each year. That was the deal.

Wind the clock forward to today. The federal government, under pressure especially from the NSW government, has introduced policy changes that are threatening to kneecap the plan, beginning with capping the buyback of water for the environment. Now, achieving environmental flow targets seems highly unlikely. And, even well-intended water buy-backs are coming at high price. Water licences recently purchased from Tandou on the Darling River were much more expensive than months ago. To add insult to injury, as the Darling is flowing less, the Environmental Water Holder – that is, us, the public—may not even be able to return this expensive water to the rivers if the nearby Menindee Lakes are re-engineered.

Late last year, the Murray-Darling Basin Authority recommended that the Darling River catchments should be "docked" 70,000 megalitres of environmental water due to socio-economic impact. Absurdly, this included potentially selling 12,000 megalitres of environmental water intended for the vulnerable internationally listed Macquarie Marshes. What of the Australian government's responsibilities under the Water Act for international wetlands and migratory species? The science is unequivocal – the system is degrading, with some hope that additional environmental flows under the deal would arrest decline.

Cracks in the Basin Plan could be filled and the 2012 deal could still be realised to Australia's benefit. But, this will take tough policy decisions and strict implementation. It means finding out exactly how much water we are using and making sure no environmental water is used for growing crops. It also means no spurious rationales for reducing environmental water targets. Considerable taxpayers' dollars were invested in this deal to make the Murray-Darling Basin healthy. Only a concerted state and federal commitment to the original plan will prevent us squandering the historical opportunity to deliver sustainability for the Murray-Darling.

Professor Richard Kingsford is Director of the Centre for Ecosystem Science and a member of the Global Water Institute at UNSW.

Don't water down the science