Buried ice on Mars could be a water source for interplanetary visits of the future, write Sophia Casanova, Andrew Dempster and Serkan Saydam. 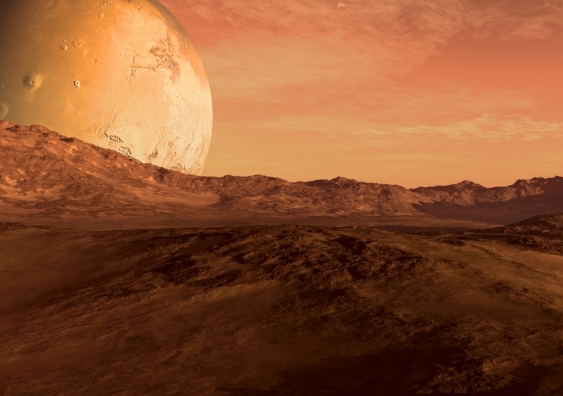 OPINION: As humans spread out across the Earth, the locations of new colonies were driven by the accessibility of resources: not only food and water, but also arable land, forests and minerals.

Access to such resources remains important as the economy moves into space. Here, water has emerged as the pre-eminent resource to exploit first.

The question then becomes, from where will we extract the water? Along with the Moon and near Earth asteroids as potential sources, Mars is an important candidate.

Mars is the focus for human settlement in space, largely due to Elon Musk’s Space X, Mars One and NASA’s activities in this regard.

The NASA human landing site selection committee proposed 47 potential sites for a human occupied base on Mars. They considered not only scientific regions of interest but also “resource regions of interest” – where there is accessible water.

A number of conditions need to be met for an exploration zone to be considered useful for prospecting for water. Water needs to be accessible, located near the surface, and of sufficient size and concentration to meet the user needs.

For operational reasons the Mars water site also needs to be located with a latitude less than 50°. This ruled out the previously identified large surface ice deposits in the high latitude polar regions of Mars.

The Protonilus - Deuteronilus Mensae region on Mars is located in the northern mid-latitudes of Mars (~8°E and 60°E 38N and 50°N).

A flattened map of the surface of Mars shows the location (red box) of the buried ice deposits in the Deuteronilus-Protonilus Mensae region. MOLA – NASA/JPL, Author provided

If the ice is preserved as we believe, these features would represent a significant resource easily capable of satisfying the requirements for a human base. It is for this reason that three exploration zones have been proposed in the region.

At the low pressures in the Martian atmosphere, and the temperatures in equatorial regions, ice can “sublime” directly from the solid to gas state (evaporation being the transition from water to gas). The features we are observing protect ice under a layer of debris.

Because of this, it is not possible to evaluate directly the quantity of ice present. Instead we must rely on data collected by orbital spacecraft to work out the geological properties and potential water resources available.

If we were able to make measurements on the planet itself (as we can usually do on Earth), things would be much clearer. However, there have been no landed rover missions to this region of Mars, so we are reliant on remotely sensed data.

There is still a lot to be learned from data collected by satellites orbiting Mars. These give us high resolution imagery of the surface, along with insight into the geological properties of these features.

We can make informed assessments about how much water there is, and where it is distributed, as well as about what lies over it (which will have to either be drilled through or excavated to reach the water). These interpretations can be used to guide future exploration activities, and assist equipment design and mine planning operations.

Rover missions could provide more certainty but planning such a mission will not occur until after site selection, and insight into the feasibility of mining ice deposits on Mars to support human missions to the Red Planet.

Other mining in space

It’s not only Mars which is being investigated as a potential source of water in space. The Moon with its supply of polar water ice is being considered as a potential resource to supply proposed lunar bases or propellant for Mars missions. The Lunar Resource Prospector mission set to launch in the early 2020s will help us better understand the resource potential of the Moon.

Asteroid mining companies such as Deep Space Industries and Planetary Resources are looking to exploit water stored in near Earth asteroids and are working towards exploratory missions in the near future.

There are a large number of technical issues that must be navigated before such an ambitious mining enterprise is considered low-risk enough to be feasible. These are challenging, but not insurmountable. A significant international effort is afoot to solve the problems with several companies, the major space agencies and the government of Luxembourg committed to the task.

Representatives from these stakeholder groups will be in Australia to discuss these issues at the Off-Earth Mining Forum to be held in Sydney, September 20-21, 2017.

This article was first pubished on The Conversation. Read the original article.