For her pioneering research in quantum physics, UNSW's Michelle Simmons has been honoured with a €100,000 international L’Oréal-UNESCO For Women in Science Award. 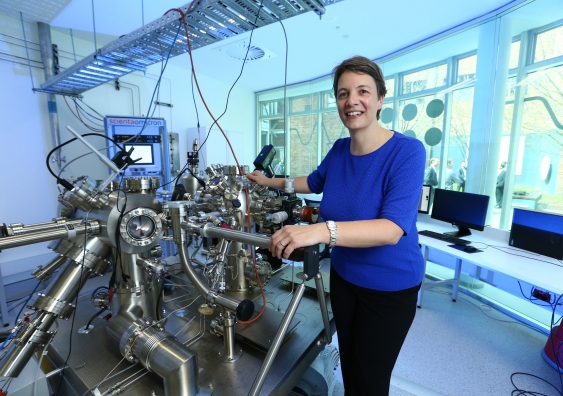 For her pioneering research in quantum physics, UNSW Scientia Professor Michelle Simmons has been honoured with a €100,000 international L’Oréal-UNESCO For Women in Science Award.

Professor Simmons, Director of the ARC Centre of Excellence for Quantum Computation and Communication Technology, CQC2T, is one of five eminent female researchers from around the world named overnight as 2017 L’Oréal-UNESCO laureates in the Physical Sciences.

She is the winner of the Asia-Pacific region, “for her pioneering contributions to quantum and atomic electronics, constructing atomic transistors en route to quantum computers”.

The five women, representing Africa and the Arab States, Asia-Pacific, Europe, Latin America, and North America, will receive their awards and prize money worth $146,000 at a ceremony to be held in Paris in March next year.

Professor Simmons’ team is the only one in the world that can make atomically precise devices in silicon. They have produced the world’s first single-atom transistor as well as the narrowest conducting wires ever made in silicon, just four atoms of phosphorus wide and one atom high.

“Trying to control nature at its very smallest scale is such an exciting and rewarding field to be in,” says Professor Simmons, of the UNSW School of Physics.

“This has been my passion for many years and has such tremendous potential. I am honoured by this recognition and hope it inspires others.”

As director of CQC2T, she heads a team of more than 180 researchers across six Australian universities, including UNSW. Centre scientists and engineers are leading the international race to build the world’s first quantum computer in silicon, and hope to produce a 10-qubit circuit within five years.

The federal government has contributed $25 million over five years towards a consortium to develop and commercialise this ground-breaking quantum computing research through its National Innovation and Science Agenda. The grant complements $25 million from UNSW and $10 million each from the Commonwealth Bank of Australia and Telstra.

In September, the Australian Research Council also extended funding to CQC2T as a Centre of Excellence for the next seven years, with a grant of $34 million from the federal government and $103 million in cash and in-kind support from participating organisations.

She has won both the Australian Academy of Science’s Pawsey Medal (2005) and Thomas Ranken Lyle Medal (2015) for outstanding research in physics. She was named NSW Scientist of the Year in 2012, and in 2015 she was awarded the Eureka Prize for Leadership in Science.

In 2014, she had the rare distinction for an Australian researcher of becoming an elected member of the American Academy of Arts and Sciences. She is also Editor-in-Chief of the first Nature Partner Journal based in Australia, npj Quantum Information.

Through its For Women in Science program, the L’Oréal  Foundation, in partnership with the United Nations Educational Scientific and Cultural Organisation, UNESCO, supports women researchers and rewards excellence in scientific fields where women remain under-represented.

On 27 October, UNSW Science will host a Girls in Science Forum where more than 180 school students will hear from the three Australian winners of the $25,000 L’Oréal-UNESCO For Women in Science Fellowships.

The school students will also tour science laboratories and carry out a variety of hands-on experiments.

The five 2017 L’Oréal-UNESCO international laureates were selected from international nominees by an independent international jury of 12 prominent scientists presided over by Professor Christian Amatore, a member of the French Academy of Sciences.