A global tracker for gas cylinders, developed in just seven weeks by UNSW engineering students, has won the inaugural Maker Games and an all-expenses-paid trip to Silicon Valley. 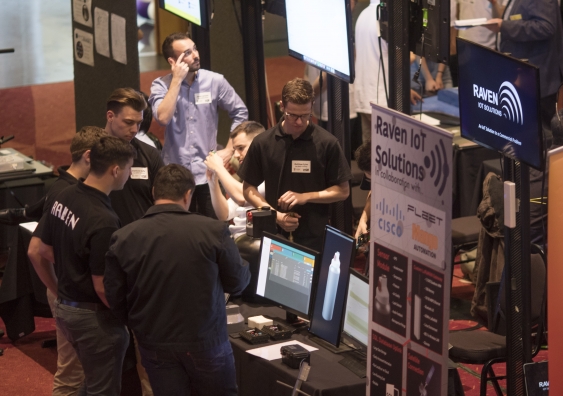 A battery-powered collar with an array of sensors in a gas-bottle collar, developed in just seven weeks by UNSW engineering students, has won the inaugural Maker Games, giving the five-strong team an all-expenses-paid trip to Silicon Valley.

The a rapid prototyping competition, in which industry giants submit their wicked problems and undergraduate students solve them in a flurry of ingenuity and engineering nous, began in July with almost 1,000 students signing up to develop ideas. In the finals, held over the weekend, 86 students in 17 teams battled it out for the $25,000 prize.

The winner, decided at a five-hour pitch and demonstration session, was Team Raven, who impressed the judges with their ‘Internet-of-Things’ (IoT) system for tracking gas bottles.

The sensor-laden collar is an integrated hardware and software suite for tracking and management that connects gas cylinders to the cloud and allows them to communicate with each other and its owners anywhere in the world. 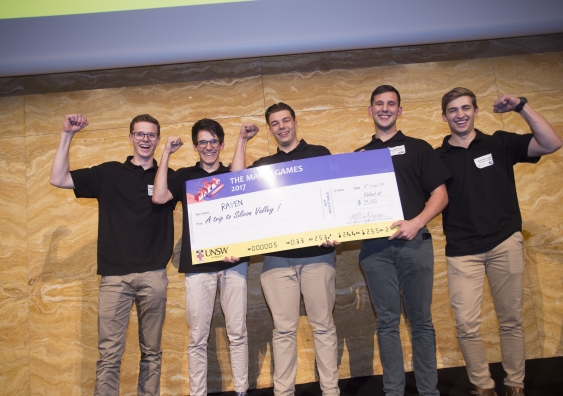 The collar uses a suite of sensors – including a gyroscope, GPS module, temperature and pressure sensors – that integrate into an IoT network via a low power, long range satellite communication antenna and radio, with a collar made using 3D prototyping.

“The key goal for a gas bottle company is to never leave an empty cylinder in the field,” said Blumentals, a renewable energy engineering student at UNSW.

“Cylinders often go missing or are mishandled, or distributors don’t know when they need to be refilled. Our system indicates when cylinders are spent, where they can be found, and where they are during transport, minimising down time.” 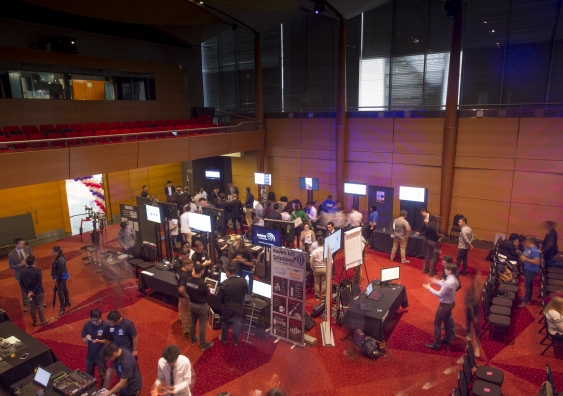 The showcase and finale of the 2017 Maker Games: a five hour marathon of pitches and demonstrations. (Photo: Quentin Jones)

None of the team had used LoRa before. “We learned a ridiculous amount,” added fellow member Eyles, an aerospace  engineering student. “It would have been impossible without a collaboration between all our different disciplines. We had to teach ourselves a lot of stuff on the fly, and gained skills that you can’t get anywhere else.”

“The prototype is well thought-out, and goes beyond just tracking, which is a very common IoT use case,” said Jeff Apcar, a Distinguished Services Engineer at Cisco, one of the companies participating in UNSW’s Maker Games, who acted as a mentor for Team Raven.

“What we get out of this is a working prototype that we can then use in our demonstrations. It’s just phenomenal. It’s fantastic. I’m very proud of them.” 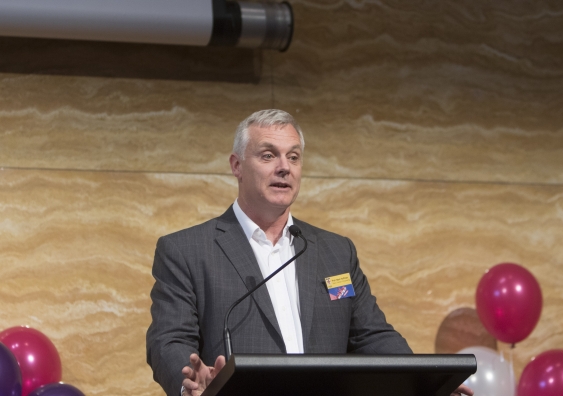 The Maker Games is the brainchild of Mark Hoffman, UNSW’s Dean of Engineering. “We’re not trying to teach a solution to the students – we’re trying to teach the ability to ask the right questions, so they can themselves develop the right solutions. Unless you’re actually working and trying to solve problems, it’s difficult to know what questions to ask.

“This is the best way you train engineers; to be like entrepreneurs who develop ideas and innovate to solve real-world problems. The Maker Games is perfect for this – we match industry partners who have really wicked problems, with the brightest engineering students, who are keen to apply the knowledge they’ve gained at UNSW to solving real world problems.”

From 115 pitches, the industry partners selected 17 teams of four to six students whose proposals they wanted to take forward and mentor, working with the teams over seven weeks to help refine their ideas. 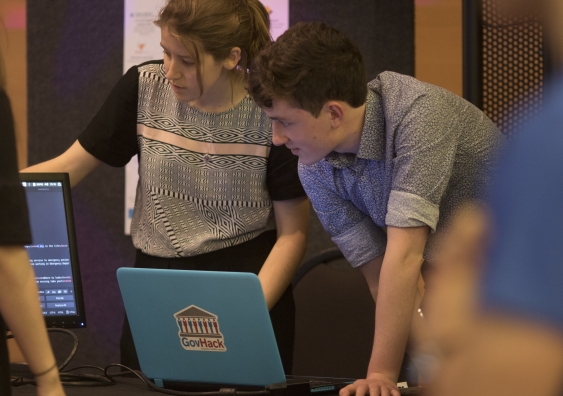 Engineering students preparing their prototypes for the finals of the 2017 Maker Games at UNSW. (Photo: Quentin Jones)

Another team, Find Your Future, harnessed data supplied by Commonwealth Bank to develop a web app for people facing a career transition. “We’ve had data scientists, people in strategy, people in technology who have been able to mentor us through this process,” said team member Linda Zhang, an electrical engineering student.

“They let us know what data sources are available and helped us build something that is not only feasible but marketable.”

Early prototypes were “a bit confusing”, said Weng, but the team used that feedback to improve later iterations.

Member Ainharan Subramaniam, a computer science student, credits their industry partners Westfield with expanding the team’s ideas and helping them think about its broader applications. 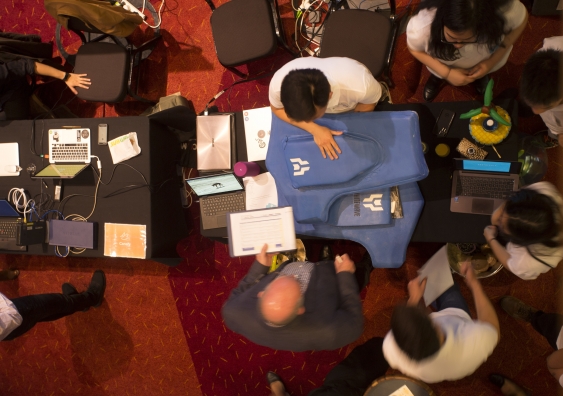 Industry representatives review one of the prototypes developed for the 2017 Maker Games: a 'Surfer Buddy’ incorporating inflatables and anchor mechanisms for beginners. (Photo: Quentin Jones)

Team Soaprise developed a prototype system for removing detergents from water used to wash road tunnels for Transurban, and a visit to the Lane Cove Tunnel helped put the problem in context.

“Studying isn’t just about sitting in a lecture,” said member Jason Wooi, a nanoscience and nanomaterials student. “When you’re actually doing something, that’s when you really learn.”

Danielle Neale, Entrepreneur-in-Residence at UNSW Engineering who co-ordinated The Maker Games, was delighted with the result.

“It’s been the most successful undergraduate exercise of this kind we’ve ever had. Students have taken up difficult industry challenges, and done so with gusto. Some of the ideas are really innovative, and those ideas are getting prototyped into products and solutions that are coming to life before our eyes. 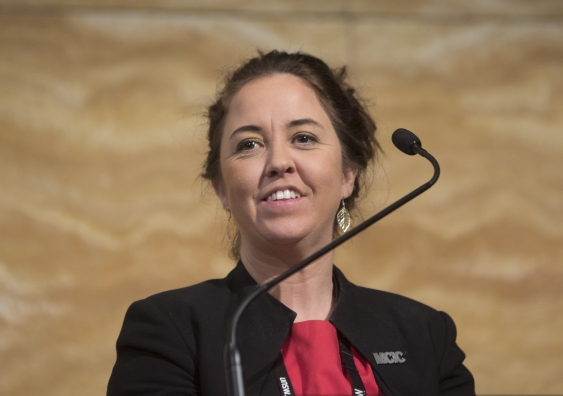 “Based on the success of the showcase, we have had a number of exciting enquires from potential partners and investors who want to be involved in The Maker Games in 2018 and beyond,” she added.

The five members of Team Raven will take their all-expenses-paid trip to California to visit Silicon Valley icons and all the hot new start-ups later this year. 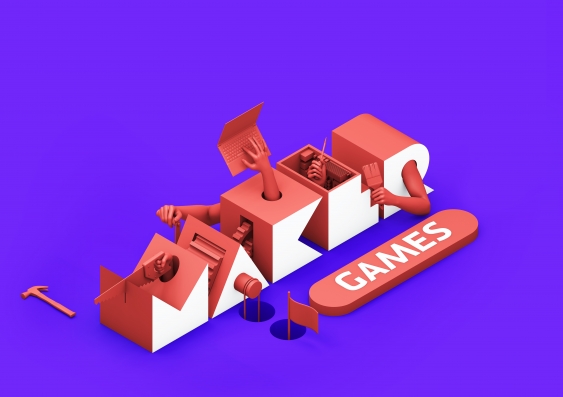