Five outstanding early-career researchers with a flair and passion for communicating their work will be Scientists in Residence at ABC RN after winning the Top 5 Under 40. 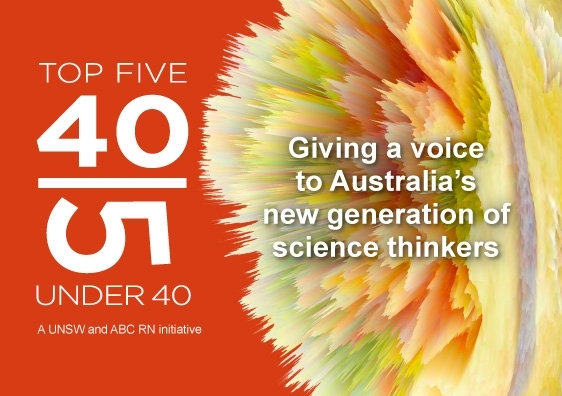 As US sitcom The Big Bang Theory continues to make even the nerdiest science cool, we’ve tracked down the real-life faces of Australia’s top early-career science communicators: the Top 5 Under 40.

Following a nationwide search, The University of New South Wales (UNSW Sydney) and ABC RN are delighted to announce the Top 5 Under 40 – the next generation of Australian science minds under the age of 40, who will embark on a two-week residency at RN, the ABC’s national ideas network.

Now in its third year, the Top 5 Under 40 initiative gives voice to Australian science researchers across the country, who contribute to the betterment of society in Australia and around the world. Providing an in-house incubator based at RN, the program nurtures the communication skills and media awareness of the Top 5 Under 40 to bring their knowledge and expertise to content-hungry audiences seeking information, entertainment and debate.

Supported by UNSW Sydney, one of Australia’s leading universities, the Top 5 Under 40 will work alongside some of Australia’s best science journalists to train in the craft of radio and TV interviews, and develop content to engage audiences across the ABC.

An overwhelming number of quality applications were submitted to the 2017 initiative. Presenter of ABC RN’s The Science Show, Robyn Williams co-adjudicated this year’s entries, alongside Professor Fiona Stanley, epidemiologist from the University of Western Australia and founding director of the Telethon Kids Institute, and Professor Merlin Crossley, UNSW Deputy Vice-Chancellor and former Dean of Science.

“The standard of both the science and the communication skills of the coming generation in this country is superb,” says Williams. “A secret to succeeding in this space is enthusiasm, and taking the media and scientific practice seriously – and above all, understanding the importance of science in the community.

This year’s candidates were brilliant, and proof of this is that we are already working with not only the Top 5 Under 40, but also some science thinkers from outside of the final five, to produce stories and content. Australia should be proud.”

Top 5 Under 40 alumni Niraj Lal credits his ABC residency for propelling him to recent appearances across Australian screens, including as Guest Physicist on ABC TV’s Todd Samson's Life on the Line.

“I was exposed to the magical cauldron of story-telling that bubbles and flames every day at the most respected broadcaster in the country,” says Lal. "I learnt the finer points of the art of capturing attention, from the sharpest journalists in Australia and had my scientific stories crafted, framed and broadcast to all corners of Australia and beyond.”

Following their mid-year residencies, the Top 5 Under 40 will be among ABC’S representation during National Science Week, 12-20 August 2017.

Top 5 Under 40 is a national search for early-career researchers who have a flair and passion for communicating their work with five winners taking up ‘Scientists in Residence’ across ABC RN.
The initiative is supported by UNSW, one of Australia’s leading science and technology universities and ABC RN, the ABC’s ideas network. #top5under40

UNSW and ABC RN give science communicators a voice