Journey to the centre of the cell: nano-rods and worms wriggle best

When it comes to delivering drugs, nanoparticles shaped like rods and worms are the best bet for making the daunting journey to the centre of a cell, new Australian research suggests. 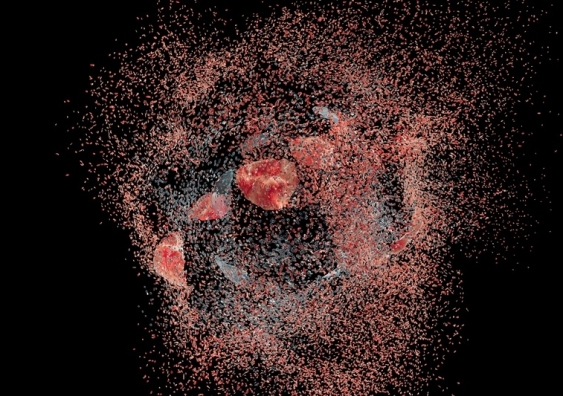 The destruction of a cancer cell. Drug-carrying nanoparticles shaped like rods and worms are most effective at traversing intracellular barriers into the nucleus of the cell. Image: Shutterstock

When it comes to delivering drugs, nanoparticles shaped like rods and worms are the best bet for making the daunting journey to the centre of a cell, new Australian research suggests.

A new study published in Nature Nanotechnology has answered a long-standing question that could lead to the design of better drug delivery vehicles: how nanoparticle shape affects the voyage through the cell.

“We were able to show for the first time that nanoparticles shaped like rods and worms were more effective than spherical nanoparticles at traversing intracellular barriers and this enabled them to get all the way into the nucleus of the cell,” says lead author UNSW’s Dr Elizabeth Hinde.

The team applied a new microscopy method to drug delivery for the first time, which allowed them to track the movement of differently shaped nanoparticles through a single cultured cancer cell, with very high temporal and spatial resolution. Using this method, the researchers were able to pinpoint where drugs were being released, and how they spread throughout the cell.

They found that the cancer drug, doxorubicin, was most effective when it could breach the strong yet porous cellular barrier protecting the nucleus – the cell’s control centre.  Importantly, they discovered that a nanoparticles shape influenced how well the drug breached the barrier.

Dr Hinde, an Associate Investigator on the Imaging CoE, says researchers could previously see the overall distribution of their nanoparticles throughout a cell, but didn’t have the microscopy tools to understand how this localisation was set up – a key limitation in drug delivery research.

“You need to know how things arrive at their final destination in order to target them there. Now we have a tool to track this incredible journey to the centre of the cell. It means other research groups can use this to assess their nanoparticles and drug delivery systems.

“They’ll be able to work out how to tailor their particles to reach the nucleus or other structures in the cell, and gauge where the cargo is being dropped off. This wasn’t possible before.”

The shape of things to come: rod, worm or sphere?

Polymeric nanoparticles will play a vital role in the future of medicine: these ultra-tiny particles can carry drugs to help attack and kill cancer cells, selectively deliver drugs just to where they are needed,  and yield breakthroughs in disease diagnostics and imaging.

UNSW engineers fabricated four types of nanoparticles: one shaped like a rod, one like a worm, and two that were spherical in shape.  These were labelled with fluorescent tags, and incubated in cancer cells. By combining a novel fluorescence microscopy approach with some statistical analysis, the team was able to create a clear picture of how each particle passed through the cell.

While the spherical particles got blocked by the nuclear envelope, the rod and worm-shaped particles were able to pass through. This provides a pathway for the development of particles that can selectively target and kill cancer cells, without hurting healthy ones.

Dr Hinde explains: “Cancer cells have different internal architecture than healthy cells. If we can fine-tune the dimensions of these rod-shaped nanoparticles, so they only pass through the cellular barriers in cancer cells and not healthy ones, we can reduce some of the side effects of chemotherapies.”

Opportunities for other researcher groups

“The impact for the field is huge,” says Scientia Professor Justin Gooding from UNSW and the ARC Centre of Excellence in Bio-Nano Science. “It gives us the ability to look inside the cell, see what the particles are doing, and design them to do exactly what we want them to do.”

“And this isn’t just thanks to the microscope, but the information and data we can extract from the new analysis procedures we’ve developed.  If other research groups can learn how to do this analysis, they can use the equipment already in their labs and get started tomorrow,” says Professor Gooding. “People are going to see, suddenly, that they can get all sorts of new information about their particles.”

The researchers will soon be collaborating with Dr John McGhee from UNSW Art & Design, who combines scientific data, microscopy images, and computer generated animation to create virtual reality renderings of the inside of human cells and blood vessels.

The artworks allow researchers to visualise and go on VR walking tours through the body, and could help speed up the drug development process.

About the ARC Centre of Excellence in Advanced Molecular Imaging

The $39 million ARC-funded Imaging CoE develops and uses innovative imaging technologies to visualise the molecular interactions that underpin the immune system. Featuring an internationally renowned team of lead scientists across five major Australian Universities and academic and commercial partners globally, the Centre uses a truly multi scale and programmatic approach to imaging to deliver maximum impact. The Imaging CoE is headquartered at Monash University with four collaborating organisations – La Trobe University, the University of Melbourne, University of New South Wales and the University of Queensland.

About the ARC Centre of Excellence in Bio-Nano Science

The ARC Centre of Excellence in Bio-Nano Science is a national innovator in bio-nano sciences and an incubator of the expertise and technological excellence required to develop next generation bio-responsive nanomaterials. The CBNS is  a collaboration between five Australian universities – Monash University and the Universities of Melbourne, Queensland, New South Wales and South Australia –  as well as with national and international partners. The Centre researchers have a diverse range of expertise, spanning nanotechnology, polymer science, cell biology, cancer biology, systems biology, pharmacology, chemical engineering, 3D CGI, immunology, chemistry and social science.