Leading lights of solar technology named in 40 Under 40 list

UNSW researchers Bram Hoex, Brett Hallam and Alison Ciesla have received an esteemed award that recognises young professionals who have made their mark in solar technology internationally. 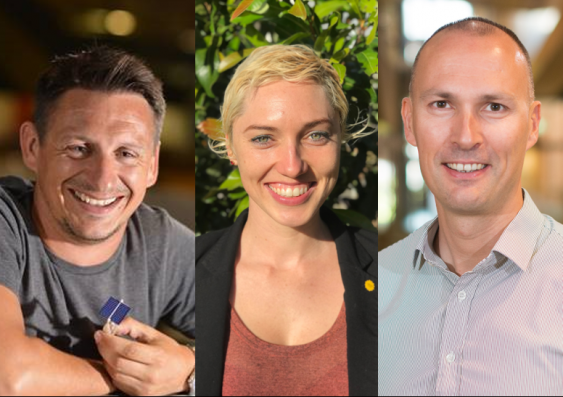 Three young rising stars from UNSW’s School of Photovoltaic and Renewable Energy Enginering (SPREE) have made the prestigious 40 Under 40 list for solar professionals.

The 40 Under 40 award recognises those under the age of 40 whose work is influencing solar technoloy development at a global level.

All three have been recognised individually for their work at UNSW Engineering and both A/Professor Hoex and Dr Hallam are currently in San Francisco to receive their awards.

A/Professor Hoex says he is chuffed to be listed among the young achievers of the solar world.

“It is a great honour for me to be part of this prestigious list as it shows that our research and educational work is having an impact on the world,” he says, which is a sentiment echoed by Dr Hallam.

Dr Ciesla, who is daughter to UNSW solar technology pioneer, the late Professor Stuart Wenham, adds that it is nice to have one’s work noticed at the global level.

“I do what I do because I feel strongly that it is important for the future progress of solar,” Dr Ciesla says.

“However, it does mean a lot that others also see the value and the importance of what I am doing.”

A/Professor Hoex and Dr Hallam intend to capitalise on the opportunity of being among the solar industry’s global elite by networking with prospective partners.

“I am hoping to engage with US-based photovoltaic and equipment manufacturers and also visit existing project partners in the Bay area,” Dr Hallam says.

The work done in SPREE that helped get A/Professor Hoex noticed was his research into improving cost-effectiveness of silicon-based solar cells.

“I particularly focus on reducing the losses at the front and rear surface of the solar cell, both the contacted as well as the non-contacted regions,” A/Professor Hoex says.

“This can be done by applying nanoscale thin films on the silicon surfaces.

“Nanoscale thin films can also be used to extract electron or ‘holes’ selectively, and these kinds of contacts are now enabling world-record solar cell efficiencies.”

(For the uninitiated reader, an electron hole is an absence of an electron where one could exist, which can be traded between atoms in the same way electrons can.) 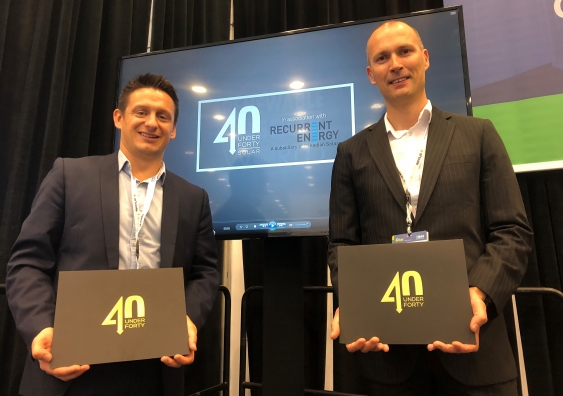 Dr Hallam and Associate Professor Hoex receiving their 40 Under 40 awards at the event in San Francisco. Dr Ciesla was unable to attend.

Dr Hallam’s work aims to improve the performance of silicon cells by eliminating or minimising defects in the cell materials.

“A key defect that I have been working on is a boron-oxygen complex that, ironically, forms under sunlight and can reduce performance by 10 per cent,” Dr Hallam says.

“I have been using atomic hydrogen that is naturally introduced in the solar cell during fabrication, to attach to the defects and electrically neutralise them.”

To achieve this, light 100 times as bright as the sun on the earth’s surface is used to manipulate the charge state of hydrogen and increase its mobility, Dr Hallam says.

Dr Ciesla works in the same team as Dr Hallam and so has also been involved with the work on hydrogenation.

“The other area of my research is laser doping and plating of metal contacts to improve efficiencies of commercial cells while reducing costs, as used in Suntech Power's PLUTO cells.”

Looking ahead, there will be an opportunity for the trio to put their heads together on a new project.

“A very exciting project is the one with Brett and Alison which focuses on combining our research strengths,” A/Professor Hoex says.

“This could enable high-efficiency solar cells to be fabricated using cheap silicon,” he says.

Dean of UNSW Faculty of Engineering Mark Hoffman says the three SPREE academics thoroughly deserve the recognition and prestige that comes with the 40 Under 40 award.

“Bram, Brett and Alison are rising stars and the future of Australia’s continued leadership in renewable energy technologies. They have made great progress in their fields and have shown why UNSW leads the world in solar research.”

“I’m very pleased for them to be recognised in this way and look forward to what they can achieve at the university in years to come.”