Lending a hand: How social media is energising crisis response

When disaster strikes, online communities are lending a hand in sharing information and offering financial support. 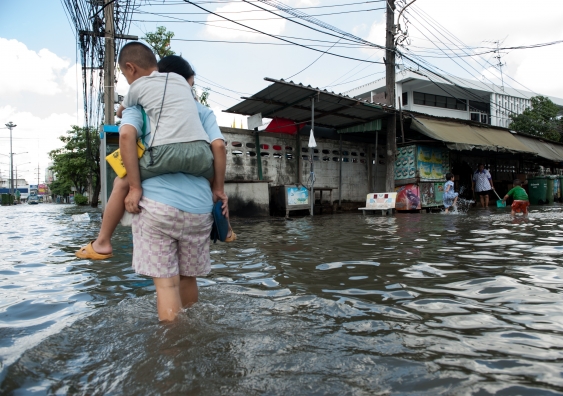 Natural disasters, such as the recent Hurricane Matthew in the Caribbean, present a huge challenge for governments, non-governmental organisations, and of course the individuals and communities affected.

But studies of the effectiveness or otherwise of the responses to these disasters typically focus on official activities, producing a top-down view of what unfolded.

Carmen Leong, a lecturer in the school of information systems and technology management at UNSW Business School, along with her colleagues, has taken a different approach, in an in-depth case study on the 2011 Thailand flooding disaster – the world's fourth most severe natural disaster at that time.

The researchers looked at how individuals on the ground used social media to share information and offer support, often in areas where the official response was lacking or ineffective.

"We explore the role of social media in facilitating community involvement, which we have observed in recent crises," says Leong. "We adopt empowerment as our theoretical lens."

There’s a widespread view of the ‘community as the victim’ in disaster research, but we’re fascinated by the power of the people on the ground - Carmen Leong

With Shan-Ling Pan, a professor at UNSW Business School, and Peter Ractham and Laddawan Kaewkitipong from Thailand's Thammasat University, Leong discovered more than 50 Facebook groups were formed during the crisis, updating information such as water levels in different areas, mobilising volunteers and coordinating the flow of donations.

One example was Nam Kuen Hai Reeb Bok ("When water rises, quickly tell"), created by a 23-year-old girl to provide a space for ordinary people to share information about the flood situation. In two weeks, the page's number of 'likes' surged to 200,000.

In another example, the Twitter account (@thaiflood) of volunteer-run website Thaiflood.com gathered more than 100,000 followers during the flooding, which was 10-times higher than the number of followers of the government-run equivalent.

The researchers also found that experts with professional knowledge – such as engineers and environmentalists – were using social media to share their knowledge with the public.

"Social media enables individuals to aggregate and exercise their collective strength," says Leong. "By augmenting the voices of powerless individuals or populations, the position of a community escalates, and the capacities and capabilities of the originally dispersed members are synergised, which propels the community forward in its development."

"There's a widespread view of the 'community as the victim' in disaster research, but we're fascinated by the power of the people on the ground."

"It's uncensored; there's no media organisation to edit things out."

Bathman was a leading force behind a viral campaign, Jom Balik Undi in 2013, to urge all Malaysians abroad to fly home to vote in the then upcoming general election.

Headlined "It's Time For Change, Malaysia", the Jom Balik Undi campaign (Malay for "Go home and vote") called on all Malaysians to get on board and spread the word by submitting photos of themselves holding a sign with their personal message of change and hope written on it. The campaign also raised money, helping more than 100 citizens to make the trip.

"Within Malaysia, there are limits on what people can do on social media, as it is monitored by the police, and even retweeting something critical of the government can bring you to the attention of the authorities," says Bathman.

Bathman discovered during the campaign which content works the best.

"We did [more than] 50 one-on-one interviews, asking the same questions, which we posted on social media, which worked really well. We also took photos of individuals with messages of support.

"But we needed to have started the campaign earlier. And also to reach out for the support of non-Malaysians – basically, anyone who supports democracy. We could have tapped in to this."

Bathman has run a number of multicultural campaigns concerned with public health, and social media is a big part of these. A recent example is a breast cancer awareness campaign for the Indian and Sri Lankan communities in NSW. While old-fashioned community events and forums are still needed, social media has proved key in disseminating videos in people's first languages.

"One of strengths of social media is its ability to engage with a community on their level – having a conversation, rather than telling them what they need to know," says Bathman.

The rise of social media has significantly changed the pace of our lives, including the expectations people have for immediate answers during a crisis - Nicole Batch.

"The rise of social media has significantly changed the pace of our lives, including the expectations people have for immediate answers during a crisis. This is a challenge for the humanitarian sector that we have been grappling with for some years."

Batch has expertise in the Restoring Family Links (RFL) program, which helps people reconnect after being separated by natural disaster or enforced migration. She was recently deployed with the International Federation of Red Cross in Europe to respond to the migration crisis there.

"In the past, we haven't responded as fast as we would like to some events," says Batch.

"With the Nepal earthquake in 2015, we activated our Family Links website immediately, so that people could register concerns for a friend or family member, or register that they themselves are safe."

Where citizens are undertaking this sort of social media-based work, independently of an organisation such as the Red Cross, Batch has some concerns over privacy – especially when it comes to children who are separated from their parents, or asylum-seekers who don't want to be identified by their home governments.

"If we publish information, individuals will be aware of what is being published, and if someone responds to a request for information, that information is verified and channelled to family members, not made public," she says.

Of course, not all people in a disaster situation will have access to social media, either as a result of the disaster itself, or from not having had access in the first place.

"In Vanuatu, with Cyclone Pam in 2015, people within Vanuatu couldn't access the internet to utilise our website to post locally. Postings were coming from the diaspora, and then our Red Cross people on the ground could search for individuals who were missing so we could inform their family members of their welfare," Batch says.

Part of Batch's role is to participate in international meetings to look at future strategies and one of the things under discussion is the use of technology in responding to disasters. In Europe, the Red Cross is developing a 'virtual volunteer' app, which can give people information on subjects such as avoiding people trafficking or accessing health services, including material in different languages and with icons, for users to negotiate more easily.

"As a volunteer-based organisation, the Red Cross aims to 'mobilise the power of humanity', and support communities to help themselves," says Batch.

"We're keen to explore how else we can use social media to empower the communities where we work.

"In some disaster response situations, social media can give us the opportunity to reach people quickly and it is exciting to think about the possibilities for how we might be able to interact with communities using digital platforms in the future."

Carmen Leong is a lecturer in School of Information Information Systems, Technology and Management, UNSW. This article was originally published on UNSW's Business Think.