A 30-year-long UNSW study of wetlands in eastern Australia has found that construction of dams and diversion of water from the Murray-Darling Basin have led to a more than 70 percent decline in waterbird numbers. 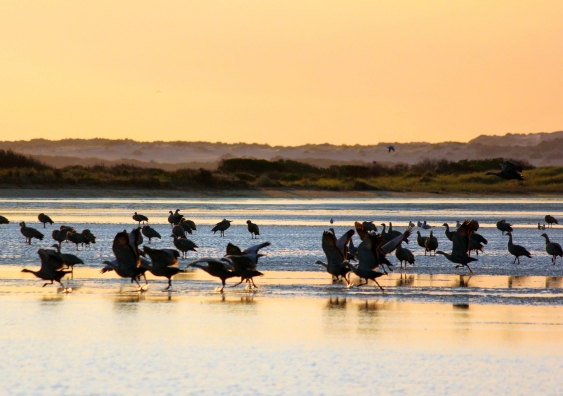 The Coorong and Lower Lakes at the mouth of the Murray-Darling Basin are key sites for waterbirds, including Cape Barren geese. Credit: UNSW

A landmark 30-year-long UNSW study of wetlands in eastern Australia has found that construction of dams and diversion of water from the Murray-Darling Basin have led to a more than 70 percent decline in waterbird numbers.

The finding of severe degradation in the basin due to reduced water flow has significant implications for managing the development of other rivers in Australia and around the world.

“Our study is the first long-term and large-scale assessment of the impacts of dams and diverting water from the rivers and wetlands of the Murray-Darling Basin,” says study lead author UNSW Professor Richard Kingsford.

“For more than 30 years we have carried out an annual aerial survey of waterbirds in an area covering almost a third of the continent. Our analysis of this unique dataset shows there has been a severe degradation of the rivers and wetlands in the Murray-Darling Basin during this period.

“By comparison, we found no signs of degradation in the rivers and wetlands in the undeveloped Lake Eyre Basin,” he says.

For more than 30 years UNSW Scientists led by Professor Richard Kingsford have carried out an annual survey of waterbirds in eastern Australia.
Read more at https://www.science.unsw.edu.au/news

The study is published in the journal Global Change Biology.

The researchers compared trends in the numbers of waterbirds, including Australian pelicans, black swans, different duck species and shorebirds, across both basins, as well as separately in their main river systems and key wetlands.

They identified a 72 percent decline in waterbird numbers during the 32 years between 1983 and 2014 in the Murray-Darling Basin, with declines in more than half of the species of waterbirds surveyed. By contrast, waterbird numbers in the Lake Eyre Basin did not change significantly.

The team found that river flows and waterbird numbers were closely linked, indicating reduced water flow due to dam construction and water diversion for irrigation was the primary reason for the long-term declines in waterbirds in the Murray-Darling Basin. 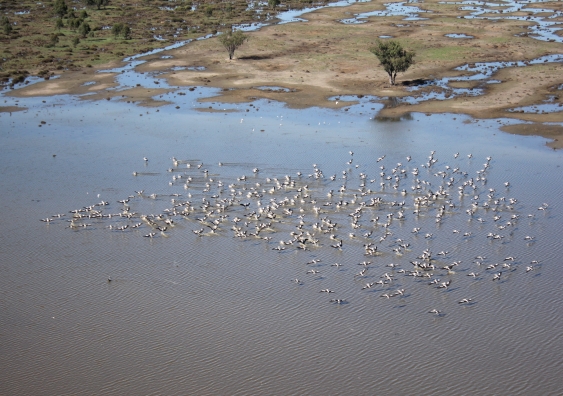 Australian pelicans, one of the species surveyed, collect in large flocks on the wetlands of the Murray-Darling and Lake Eyre Basins. Credit: UNSW

“By grouping waterbirds, such as plant-eating birds and fish-eating birds, we showed that the degradation affected a wide range of different plants and animals in the wetlands; declines in these waterbirds means their food levels are also falling,” says Professor Kingsford, who is Director of the UNSW Centre for Ecosystem Science.

The research team identified some impacts of duck hunting in southern Australia but these were not as strong as the effects of diverting water from the rivers of the Murray-Darling Basin.

“The key aspect of our study which gives us considerable confidence in our findings is that we were able to show that river flows and waterbird numbers were closely related, despite a range of other factors we examined, including the effect of duck hunting,” says study co-author and UNSW research fellow Dr Gilad Bino.

The study also examines the impact of increased environmental flows provided under the Murray-Darling Basin plan. Although more water could lead to about an 18 percent recovery in waterbird numbers, the team found this could be reduced to only a 1 percent increase as a result of long-term climate change, which is not adequately considered in the plan for the Basin. 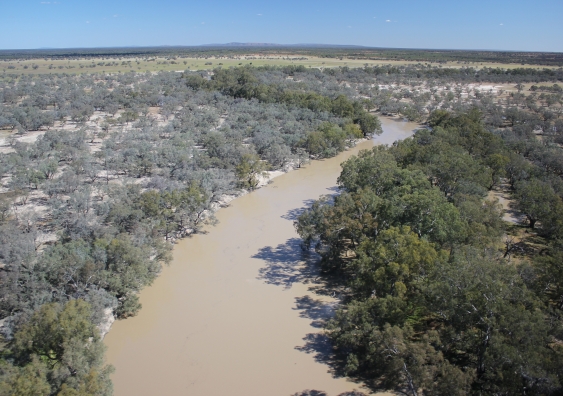 The Darling River has its flows reduced by diversion of water, affecting downstream river red gums as well as land-holders dependent on the river flows. Credit: UNSW

Last year, the Murray-Darling Basin Authority recommended a reduction in environmental flows of 70 gigalitres per year from the Darling River catchments, including a reduction of environmental flows to the internationally important Macquarie Marshes, which the study shows have also suffered a long-term decline in waterbird numbers across most species.

“This reduction in environmental flows would exacerbate the long-term impacts of water resource development,” says Professor Kingsford. “The importance of environmental flows for the rivers and wetlands of the Murray-Darling Basin cannot be underestimated; they are critical for such wetlands as the Macquarie Marshes where we have international responsibilities.”

As one of the few studies in the world to examine the effects of river and wetland degradation over a long time period and wide area, the results allow the team to warn of the long-term impacts of new dams on rivers in other areas and countries. 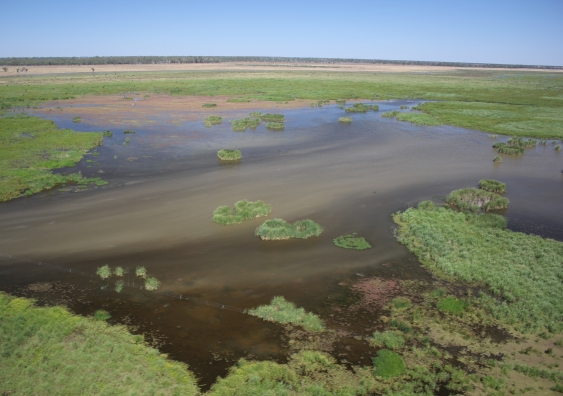 Flooding in the Macquarie Marshes is improved by environmental flows but is threatened by potential cut backs in environmental flow water under recommendations from the Murray-Darling Basin Authority. Credit: UNSW

“It is not just the waterbirds that are affected, but also the quality of the rivers and the services they provide to downstream communities, such as fish populations and river red gums,” says Professor Kingsford.

“This study rings alarm bells for the Australian and Queensland governments currently pushing to establish irrigation in Northern Australia. Clearly, the building of dams and diversion of water will devastate our tropical wetlands, which are so important for the many ecosystem services they provide, including to future tourism and Aboriginal communities.”

For more information please see the Centre for Ecosystem Science.

Video from the plane also available on request.