Opinion Maluku earthquake: why do some ocean earthquakes cause tsunamis while others don't?

Earthquakes originating underneath the ocean are often accompanied by tsunami warnings. Here’s what determines the tsunami risk. 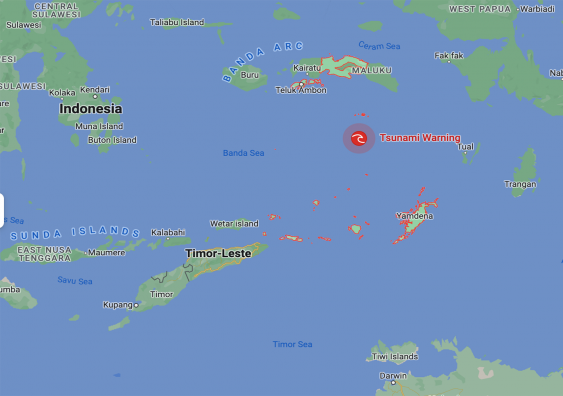 There is one main reason why some earthquakes generate tsunamis. Image: Google Maps.

We live on an active planet, one whose surface is constantly in motion, although imperceptibly to us most of the time. Until an earthquake occurs.

This morning, just such an event happened in the seas north of the Indonesian Archipelago, where a strong (magnitude 7.6 on the Richter scale) earthquake shook the region and was felt as far afield as Darwin in Australia.

The Bureau of Meteorology advises there is no tsunami warning for Australia, while some parts of Indonesia are in watch and wait mode. But what determines if a tsunami will occur?

Only 70 years ago, it was considered our planet was rigid and affected only by slight sagging and raising of landscapes.

However, with the advance of technology in the 1950s we began to map the seafloor using sonar. We could also measure the magnetic properties of the seafloor.

As a result, we’ve discovered the ocean floors are splitting apart at undersea mountain ranges known as mid-ocean ridges.

Additionally, oceanic crust (the part of Earth’s crust underlying the ocean basins) is being lost around the edges of most continents. It is being returned deep into Earth’s mantle – the thick layer of semi-molten rock beneath Earth’s surface crust.

This happens at what are known as “subduction zones”. Subduction zones are deep oceanic trenches where one tectonic plate dives down beneath another, generating earthquakes as the rocks slowly grind past one another.

The source of tsunamis

So why is it some earthquakes generate deadly tsunamis and others don’t?

Earth’s tectonic plates move across the planet’s surface at an average speed of around 10cm per year. This speed was originally estimated based on changes in the magnetic seafloor properties, but has now been measured by satellites in space.

This movement is not a smooth process, since Earth’s crust is hard and experiences strong friction when the tectonic plates come into contact with one another.

As they move, this friction builds up stress in the rock, which is released every once in a while in the form of earthquakes. In some places, earthquakes occur only occasionally but are very strong, while in others they happen more frequently and are weaker.

But earthquakes also vary greatly in terms of how deep they are generated below the surface. This is because subduction zones continue for a long way down into the mantle. The rocks remain cold and stiff for hundreds of kilometres down before they get hot enough from the internal heat of the planet to become soft.

And this is the main reason some earthquakes generate tsunamis and others do not. Shallow subduction zone earthquakes actually displace the seafloor – either up or down – and also the ocean above it.

This happened with devastating effect in the 2011 Tohoku earthquake in Japan, located 24km deep and 9.1 magnitude on the Richter scale. This single earthquake moved the crust 26 metres in seconds and lifted up the ocean, sending the crashing waves of a tsunami right across the Pacific Ocean.

Meanwhile last night’s 7.6 magnitude Maluku earthquake in Indonesian waters was not as strong and occurred at a depth of 105km. At this depth, the energy and associated movement from the earthquake becomes dissipated into a million small fractures in the overlying rocks.

The energy also has to pass up through a wedge of the semi-molten mantle. Thus, the surface expression of the earthquake is significantly weakened and we either get no ocean waves, or only small ones.

Because Earth’s plates move at a relatively constant rate and we have a record of earthquake activity for any particular part of Earth’s crust in the form of the geological record, we can predict roughly how often earthquakes should occur in any broad location.

Unfortunately, we do not yet have the technology to be able to predict exactly when or where an earthquake will occur. But what we can do is identify areas at risk and build earthquake-resistant infrastructure in areas prone to earthquakes to prevent damage and loss of life.