Fossilized bones of two new species of tiny, flightless extinct birds have been discovered by Australasian scientists in 19 to 16-million-year-old sediments of an ancient lake on the South Island of New Zealand. 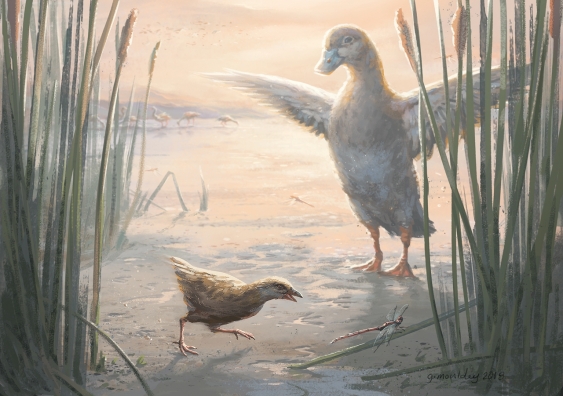 A tiny extinct rail (30-40g) is overshadowed by a regular duck. Artist's impression by Gavin Mouldey

Fossilized bones of two new species of tiny, flightless extinct birds have been discovered by Australasian scientists in 19 to 16-million-year-old sediments of an ancient lake on the South Island of New Zealand.

The two miniscule species - one barely larger than a sparrow - were members of the rail family, a group of birds common today in wetlands that includes swamphens, moorhens, coots and crakes. Their remains were unearthed near the town of St Bathans in Central Otago.

Many rail species can fly well and have dispersed to far-flung oceanic islands. However, flightlessness has evolved more times in this group of birds that in any other, especially on predator-free islands. The world’s largest rails evolved in New Zealand, notably the flightless takahe and weka.

The study, led by scientists from Flinders University with colleagues from UNSW, Canterbury Museum and the Museum of New Zealand, is published in the Journal of Systematic Palaeontology.

Team member UNSW Professor Mike Archer, says: "This new discovery emphasizes the fact that New Zealand has long been one of the world’s most extraordinary engines driving bird evolution.

"Charting how lineages like these rails have changed through time on an island that has been geographically isolated for more than 80 million years will test basic presumptions made about bird evolution in general," says Professor Archer of the of the PANGEA Research Centre in the School of Biological, Earth and Environmental Sciences.

Nineteen to 16 million years ago, a 5600 square kilometre megalake dominated the landscape of New Zealand’s South Island. It was surrounded by a subtropical rainforest and plants typical of Australia and long lost from New Zealand, such as eucalypts, casuarinas, palms and cycads, were common there.

“Flightlessness in birds is often associated with an increase in size,” says Ellen Mather, study lead author and PhD student at Flinders University. “The weka, which is in the same family as our fossil birds and lives in New Zealand today, is about the size of a chicken. The Banded Rail, their closest flying relative, is about half that size."

The most common of the new fossil rails has been named Priscaweka parvales, meaning ancient weka with small wings. It was a mere one twentieth of the weight of a weka and was similar in size to the recently extinct Chatham rail Cabalus modestus.

When humans discovered New Zealand, the main islands had many flightless birds including giants within the nine species of moa, several kiwi, two huge geese, two adzebills, even some tiny wrens, and at least five flightless rails.

Team member, Dr Paul Scofield, a Senior Curator at the Natural History at Canterbury Museum, says: "The new St Bathans’ rails join a host of other fossil birds recovered from these deposits that show New Zealand has long been a land of birds. The discovery of these two miniscule flightless rails raises the question of ‘Where did they come from?’"

The researchers suggest they had ancestors in Australia which flew across the 1500 km ocean to New Zealand in previous millennia. However, the new species are unlike any rail known elsewhere, so their exact origin or closest relatives remain a mystery.

Other than hints of large flightless moa ancestors, these rails are the first flightless birds to be described from this fauna. This is unexpected as the St Bathans Fauna contains small terrestrial mammals, which normally preclude evolution of small flightless species. The tiny flightless rails therefore strongly suggest that the mysterious mammals were not predators of small birds. Flightless birds have been a feature of the New Zealand avifauna for millions of years, much longer than previously thought. They are probably the oldest flightless rails known globally.

“The ongoing research into the fossil birds of New Zealand builds on that begun over 150 years ago. It continues to throw up revelations into the timing and origins of major groups of birds that characterize modern avifaunas” says Associate Professor Trevor Worthy of Flinders University.