One of the scourges of hospital infections – biofilms formed by bacteria that stick to living tissue and medical instruments – can be tricked into dispersing with the targeted application of nanoparticles and heat. 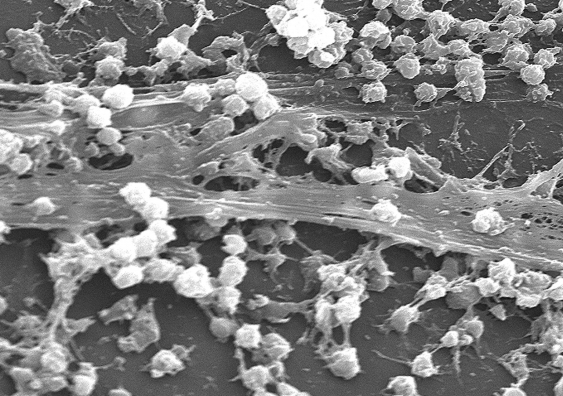 One of the scourges of infections in hospitals – biofilms formed by bacteria that stick to each other on living tissue and medical instruments, making them harder to remove – can be tricked into dispersing with the targeted application of nanoparticles and heat, researchers have found.

“Chronic biofilm-based infections are often extremely resistant to antibiotics and many other conventional antimicrobial agents, and have a high capacity to evade the body’s immune system,” said Associate Professor Boyer. “Our study points to a pathway for the non-toxic dispersal of biofilms in infected tissue, while also greatly improving the effect of antibiotic therapies.” 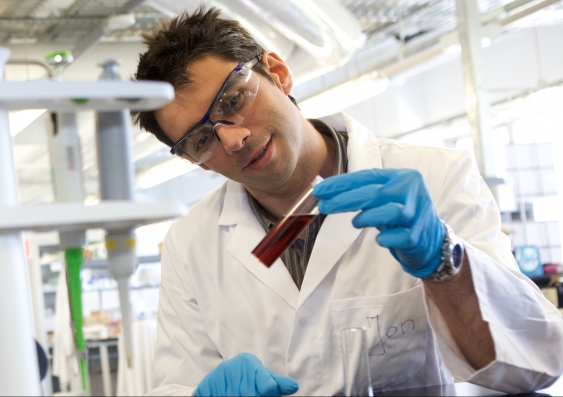 Cyrille Boyer studying a polymer matrix in his UNSW lab.

The formation of biofilms is a growing and costly problem in hospitals, creating infections that are more difficult to treat – leading to chronic inflammation, impaired wound healing, rapidly acquired antibiotic resistance and the spread of infectious embolisms in the bloodstream.

They also cause fouling and corrosion of wet surfaces, and the clogging of filtration membranes in sensitive equipment – even posing a threat to public health by acting as reservoirs of pathogens in distribution systems for drinking water.

In general, bacteria have two life forms during growth and proliferation: planktonic, where bacteria exist as single, independent cells; or aggregated together in colonies as biofilms, where bacteria grow in a slime-like polymer matrix that protects them from the environment around them.

Acute infections mostly involve planktonic bacteria, which are usually treatable with antibiotics. However, when bacteria have had enough time to form a biofilm – within a human host or non-living material such as dialysis catheters – an infection can often become untreatable and develop into a chronic state.

Although biofilms were first recognised in the 17th century, their importance was not realised until the 1990s, when it became clear that microbes exist in nature more often in colonies made up of lots of different microorganisms that adhere to surfaces through slime excreted by their inhabitants. Thus began a global race to understand biofilms, at a time when it was also realised they were responsible for the majority of chronic infections.

The discovery of how to dislodge biofilms by the UNSW Faculty of Engineering team – jointly led by Dr Nicolas Barraud, formerly of UNSW and now at France’s Institut Pasteur – was made using the opportunistic human pathogen Pseudomonas aeruginosa. This is a model organism whose response to the technique the researchers believe will apply to most other bacteria.

When biofilms want to colonise a new site, they disperse into individual cells, reducing the protective action of the biofilm. It is this process the UNSW team sought to trigger, making the bacteria again susceptible to antimicrobial agents.

Once dispersed, the bacteria are easier to deal with – creating the potential to remove recalcitrant, antimicrobial-tolerant biofilm infections.

The UNSW team found that by injecting iron oxide nanoparticles into the biofilms, and using an applied magnetic field to heat them – which induces local hyperthermia through raising the temperature by 5°C or more – the biofilms were triggered into dispersing.

They achieved this using iron oxide nanoparticles coated with polymers that help stabilise and maintain the nanoparticles in a dispersed state, making them an ideal non-toxic tool for treating biofilm infections.

“The use of these polymer-coated iron oxide nanoparticles to disperse biofilms may have broad applications across a range of clinical and industrial settings,” said Associate Professor Boyer, who in October was named Physical Scientist of the Year in the Prime Minister’s Prizes for Science.

“Once dispersed, the bacteria are easier to deal with – creating the potential to remove recalcitrant, antimicrobial-tolerant biofilm infections.”

Others involved in the study were Dr Thuy-Khanh Nguyen and Ramona Selvanayagam of the Centre for Advanced Macromolecular Design and the Australian Centre for NanoMedicine at UNSW; and Dr Hien T. T. Duong, formerly at the UNSW and now at the University of Sydney.

Cyrille Boyer, a chemical engineer, is the deputy director of the Australian Centre for NanoMedicine at the School of Chemical Engineering, UNSW, where he is the project leader for the development of new polymeric nanoparticles for drug delivery and gene therapy.

He has co-authored over 150 research articles, five book chapters and holds seven international patents. Born in France in a vineyard near Avignon, he graduated in 2007 with a PhD in polymer chemistry from the University of Montpellier II and came to Australia that same year.

In October 2015, he received the Malcolm McIntosh Prize for Physical Scientist of the Year, one of Australia’s Prime Minister’s Prizes for Science, for his contribution to polymer science and nanotechnology. In November, he was awarded the 2016 Le Févre Memorial Prize by the Australian Academy of Science, and in December named one of the inaugural Knowledge Nation 100 by The Australian newspaper, a list of Australia’s top “visionaries, intellects, founders and game changers”.