National centre of excellence in quantum opens at UNSW

The Australian Research Council Centre of Excellence in Quantum Computation and Communication Technology at UNSW Sydney has been officially launched. 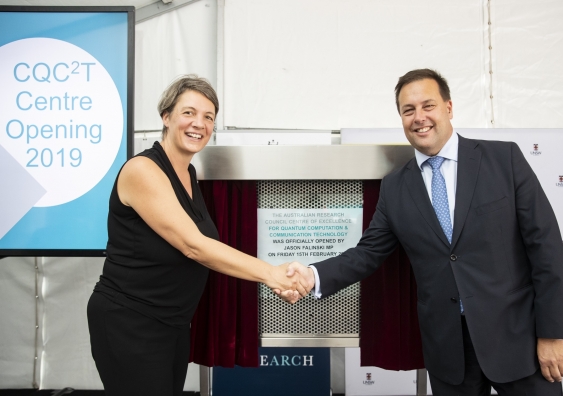 Director of CQC2T and Scientia Professor Michelle Simmons with Jason Falinski MP at the launch of the Australian Research Council Centre of Excellence in Quantum Computation and Communication Technology.

The CQC2T is an international collaboration between seven Australian universities and more than 25 partners to form one of the largest combined efforts in quantum computation and communication research in the world.

The centre, led by 2018 Australian of the Year Professor Michelle Simmons, is a global leader in quantum computing research developing quantum processes in silicon and optical platforms that will be linked over secure communication networks.

“We are very fortunate to have a team of exceptional researchers in Australia delivering world leading quantum information research” says Professor Michelle Simmons, Director of the CQC2T.

"At the very forefront of what humans have achieved to date, our research achievements and strong global collaborations, have put us in pole position to drive an industry that will shape the information economy of the 21st century."

In addition to announcing major breakthroughs in 3D architectures for a large-scale silicon quantum computer, the centre has announced the development of the next generation of photonic microchips that will be the key to developing large-scale photonic quantum computer.

Researchers at the centre are now proposing to implement quantum processors able to run error corrected algorithms and transfer information across networks with absolute security. The technology developed will provide a strategic advantage in a world where information and information security are of paramount importance.

The ongoing success of CQC2T has led to the development of two Australian companies, QuintessenceLabs for secure communication systems and Silicon Quantum Computing for silicon-based quantum computing.

“The commercial success and collaboration across other quantum centres nationally have made Australia the quantum capital of the world,” said Professor Simmons.

At the opening, Mr Falinski said the funding would allow the centre to build on its strong successes.

“Australia has firmly established itself as a global leader in this 21st century technology – $33.7 million in funding will enable the Centre to continue to build on its world-leading research to develop complex quantum processors that correct errors and transfer information across vast networks with absolute security,” Mr Falinski said. 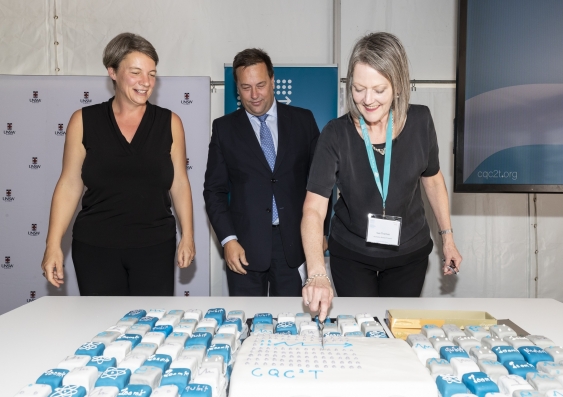 Director of the CQC2T and Scientia Professor Michelle Simmons, Jason Falinksi MP and the Chief Executive Officer of the Australian Research Council, Professor Sue Thomas at the launch of the ARC Centre of Excellence in Quantum Computation and Communication Technology.

UNSW President and Vice-Chancellor Professor Ian Jacobs said the CQC2T researchers were working at the forefront of quantum information technology and innovation, which would lead to significant impacts across the global economy.

“Quantum computing not only has the potential to completely revolutionise the way many of us will work but could create jobs and even new industries we haven’t even imagined yet,” Professor Jacobs said.

“We applaud the ARC’s recognition of CQC2T as a fine example of Australia’s truly world-leading research.”

Professor Sue Thomas, Chief Executive Officer of the ARC, said the CQC2T has had an unparalleled record of success.

“At the ARC, it’s our great privilege to be able to support (this) work and we look forward to the great successes to follow,” Professor Thomas said.

For more information about the scheme, visit the ARC website.