Researchers have developed an innovative technique for creating nanoscale materials with unique chemical and physical properties. 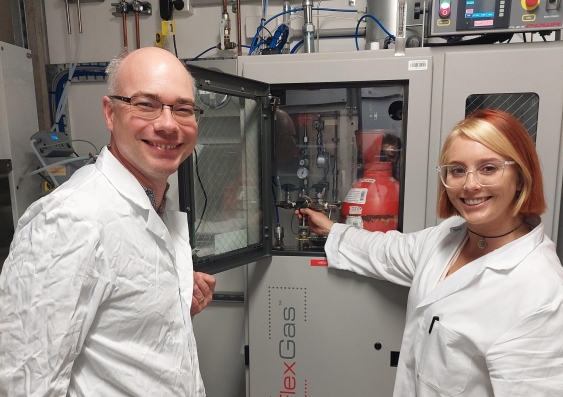 In the study published in Science Advances, researchers from the School of Chemistry at UNSW Science show it’s possible to sequentially ‘grow’ interconnected hierarchical structures in 3D at the nanoscale which have unique chemical and physical properties to support energy conversion reactions.

In chemistry, hierarchical structures are configurations of units like molecules within an organisation of other units that themselves may be ordered. Similar phenomena can be seen in the natural world, like in flower petals and tree branches. But where these structures have extraordinary potential is at a level beyond the visibility of the human eye – at the nanoscale.

Using conventional methods, scientists have found it challenging to replicate these 3D structures with metal components on the nanoscale. To understand just how small these tiny 3D materials need to be – in one centimetre, there are 10 millimetres. If you were to count one million tiny segments in just one of those millimetres, each of those would be one nanometre or nm.

“To date, scientists have been able to assemble hierarchical-type structures on the micrometre or molecular scale,” says Professor Richard Tilley, Director of the Electron Microscope Unit at UNSW and senior author of the study. “But to get the level of precision needed to assemble on the nanoscale, we needed to develop an entirely new bottom-up methodology.”

The researchers used chemical synthesis, an approach that constructs complex chemical compounds from simpler ones. They were able to carefully grow hexagonal crystal–structured nickel branches on cubic crystal–structured cores to create 3D hierarchical structures with dimensions of around 10-20 nanometres. 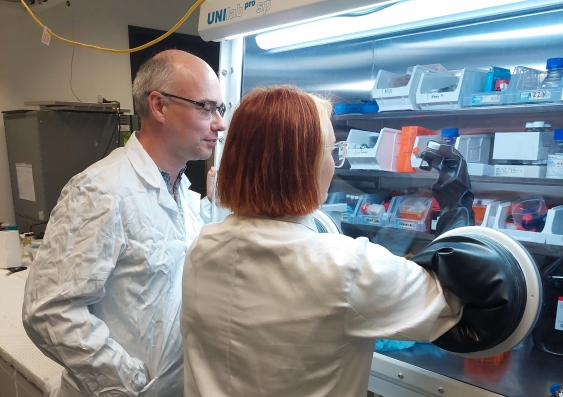 Professor Tilley and Dr Gloag at a glove box, which is used in the preparation of the reaction when synthesising the nanostructures. Photo: Supplied.

The resulting interconnected 3D nanostructure has a high surface area, high conductivity due to the direct connection of a metallic core and branches, and has surfaces that can be chemically modified. These properties make it an ideal electrocatalyst support – a substance that helps speed up the rate of reactions – in the oxygen evolution reaction, a crucial process in energy conversion. The nanostructure’s properties were examined using electrochemical analysis from state-of-the-art electron microscopes provided by the Electron Microscope Unit.

“Growing the material step by step is a contrast to what we do assembling structures at the micrometre level, which is starting with bulk material and etching it down,” says the lead author of the study Dr Lucy Gloag, a Postdoctoral Fellow at the School of Chemistry, UNSW Science. “This new method allows us to have excellent control over the conditions, which lets us keep all of the components ultra-small – on the nanoscale – where the unique catalytic properties exist.”

In conventional catalysts, which are often spherical, most atoms are stuck in the middle of the sphere. There are very few atoms on the surface, meaning most of the material is wasted as it can’t take part in the reaction environment.

These new 3D nanostructures are engineered to expose more atoms to the reaction environment, which can facilitate more efficient and effective catalysis for energy conversion, Prof. Tilley says.

“If this is used in a fuel cell or battery, having a higher surface area for the catalyst means the reaction will be more efficient when converting hydrogen into electricity,” Prof. Tilley says.

Dr Gloag says it means that less of the material needs to be used for the reaction.

“It will eventually decrease the costs as well, making energy production more sustainable and ultimately shifting our dependence further away from fossil fuels.”

In the next research stage, the scientists will look to modify the surface of the material with platinum, which is a superior catalytic metal though more expensive. About a sixth of the cost of an electric car alone is the platinum powering the fuel cell.

“These exceptionally high surface areas would support a material like platinum to be layered on in individual atoms, so we have the absolute best use of these expensive metals in a reaction environment,” Prof. Tilley says.