A UNSW Canberra agreement with the Australian National University means Australia now has the facilities to come up to speed with the international space sector. 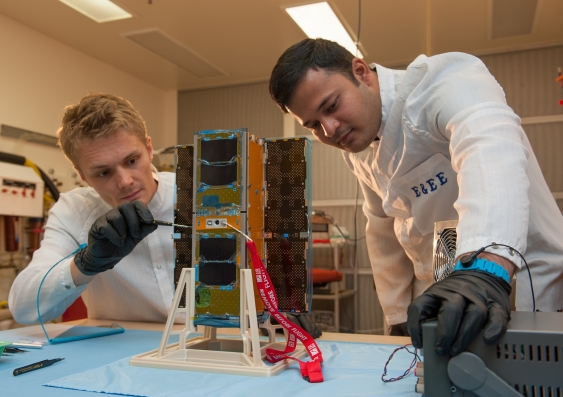 UNSW Canberra and the Australian National University (ANU) will join forces to create end-­to-­end capability for the design, assembly and testing of spacecraft for future space missions.

"Australia has been, until now, one of the few developed countries without the ability to professionally design and deliver space missions," said Professor Russell Boyce, Director of UNSW Canberra Space.

"The UNSW Canberra team includes 40 highly skilled Australian space professionals from the global space sector. This includes scientists, engineers, faculty staff, postdocs and PhD students, who bring more than 150 years of experience in organisations such as ESA and NASA –­ where they designed, developed and deployed spacecraft and space instrumentation for near-­Earth and deep space programs."

Dr Doug Griffin, Space Mission Lead at UNSW Canberra Space, said: "Space is a big industry, it is complicated and requires a diverse, yet unique set of skills. The UNSW Canberra agreement with ANU means Australia now has the facilities to come up to speed with the international space sector."

UNSW Canberra’s new Concurrent Design Facility, partly funded by the ACT Government, will also partner with the French space agency CNES. An Australian first, this facility allows the country to lead the design and operation of future space missions.

"This is an exciting time for Australian space research and innovation," said Professor Michael Frater, Rector of UNSW Canberra. "The combination of two Group of 8 universities in the heart of the nation’s capital, focussing on space missions, will see the ACT and Australia mature as serious players on the global space stage."

Professor Boyce said: "This agreement also helps create the right environment in the ACT for space engineering to grow and deliver commercial operations. The UNSW Canberra commercial spin-­off Skykraft will provide commercial services to a growing space sector, drawing on the research at UNSW Canberra Space.

"So, our UNSW Canberra space partnerships will service not only our teaching and research, but will feed right through to supporting national needs and commercial opportunities.

"These agreements provide new employment pathways for university graduates, while positioning Canberra right at the heart of the national space industry."