If similarities between the Xichang fossils and modern humans are reflective of shared ancestry, then interbreeding offers a plausible explanation, writes Darren Curnoe. 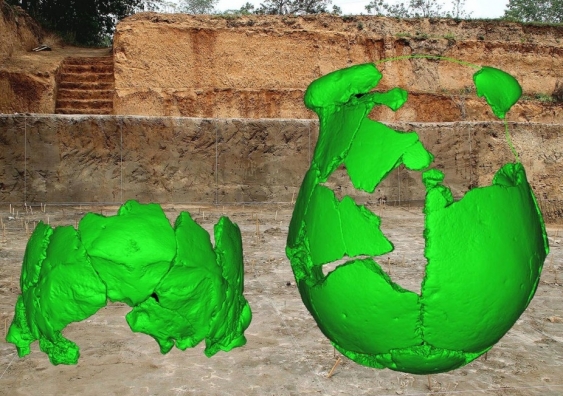 OPINION: Just a decade ago we thought we had solved the mystery of mysteries. We were confident we had finally puzzled out the evolutionary origins of modern humans.

Two hundred thousand years ago our species evolved in sub-Saharan Africa and by around 60,000 years ago strode out to settle Asia, Australia, Europe and eventually the Americas, replacing the Neanderthals as we set up home.

But as is so often the case in science, the story of our origins would turn out to be so much more complicated than we had expected. The rapid pace and unexpected nature of discoveries over the last 10 years have led both scientists and the media to muddledom, leaving the wider community in a bit of a daze.

The publication of the first draft sequence of a Neanderthal genome was a game changer, showing that Neanderthals had interbred with the ancestors of non-African people tens of thousands of years ago.

It was followed very quickly by the genome sequence of the mysterious ‘Denisovans’ which showed that 4-6% of its DNA was present in people living today in New Guinea as a result of interbreeding with their ancestors somewhere in Asia.

Since then, we’ve learned a heck of lot about the extent and timing of interbreeding, the specific genes transferred into the modern human genome from Neanderthals and Denisovans, and even the negative impact of this gene mixing; including that hybrid modern males were the human equivalent of ‘mules’.

And while anthropologists had argued for over a hundred years about whether the Neanderthals were a separate species from us, this was finally resolved in the affirmative during last half decade thanks to genomics research.

If you read the recent media hype surrounding two new skulls of archaic humans from Xichang in eastern China you might be forgiven for thinking anthropology was yet again being subject to a major overhaul.

The discovery was announced by a team led by Zhan-Yang Li and was made in the prestigious journal Science. It took Li 7 years of painstaking excavation to recovery the bones, which are dated to between 125,000 and 105,000 years old.

These are important fossils that help fill a major gap in time in the human fossil record, especially in East Asia.

In terms of their physical traits, they combine features found in many archaic humans from this period shared with modern humans, like large brain cavities and thin skull bones.

At the same time they possess primitive features like very prominent eyebrow ridges and the greatest width of the skull being across the ear bones, not high up on the brain case like modern humans.

They also share with the Neanderthals some features of the skull including the shape of the organs of balance (or semi-circular canals) contained deep within the bony ear tube.

Ann Gibbons writing for Science speculated the Xichang skulls might be from the Denisovans. Fun to speculate, but we only have two finger bones and a tooth from this species so we have no idea what their skulls looked like.

Other outlets claimed the discovery challenged our African origins and proved that Neanderthals had made it to China.

Headlines claiming humans evolved in China might be good click bait but they misrepresent a long standing consensus among anthropologists and geneticists. It would take a heck of a lot more evidence than two incomplete skulls to overturn the African origins theory.

And the features shared with Neanderthals don’t prove or disprove they were in China. How about a couple of actual Neanderthal bones from the region for a start?

Still some of the confusion originates from the scientists involved, so we can’t blame the media entirely for getting it wrong.

The researchers behind the new study want to have a bet both ways, acknowledging on the one hand the validity of the African origins theory, but then claiming on the other hand the Xichang skulls represent the immediate precursors of modern humans in China.

Logically, modern humans could only have evolved once, and the overwhelming evidence points to Africa. So how does this work, you might ask?

The Xichang skulls are seen as proving a long discredited model dubbed regional continuity which would see living Chinese populations evolving from very early humans in China, as far back as two million years ago.

Only in this case some genes were apparently introduced into this long lasting archaic group from modern humans from Africa and also from Neanderthals from Siberia or Europe. This, the authors think, would explain their mixed set of bony features and gave them a boost on their trajectory to becoming modern people.

To my mind, if the similarities between the Xichang fossils and modern humans are genuinely reflective of shared ancestry (i.e. they are homologies) then interbreeding offers us far more plausible explanation than a clapped out theory like regional continuity.

Alternatively, the Xichang skulls might simply be an example of a late surviving archaic group in China. Sort of like an East Asian equivalent of the Neanderthals or the Hobbit. And why not?