A UNSW-led team has devised a technique for detecting if methane from coal seam gas extraction sites is leaking into nearby groundwater, and has tested it for the first time in Queensland. 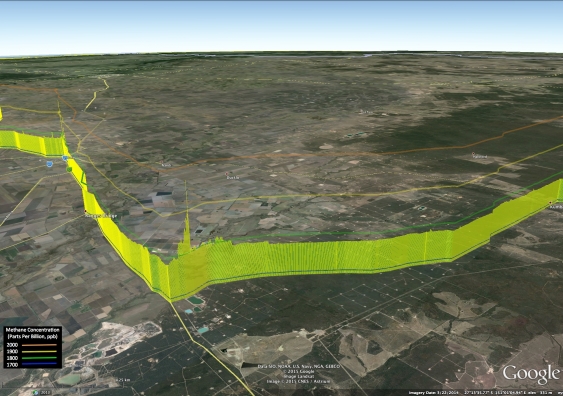 A map showing continuous measurements of methane in the near surface atmosphere adjacent to a coal seam gas field, Condamine Catchment, Qld. An increase in methane concentration is observable near the water holding reservoirs.

A UNSW-led research team has devised a technique for detecting if methane from coal seam gas extraction sites is leaking into nearby groundwater, and has tested it for the first time in Queensland.

Gas extraction from the Walloon Coal Measures near Dalby in the south east of Queensland has expanded rapidly in the past decade, raising concerns among farmers that the groundwater level in the Condamine River Alluvial Aquifer will fall as a result of coal seam gas production.

This study shows that the risk of any short-term impact from CSG production on groundwater resources used by the irrigation sector remains low.

“Our new workflow, based on an analysis of air and groundwater chemistry, could be applied around the world to help safeguard groundwater resources by identifying any underground connections between coal seams and aquifers,” said project leader Associate Professor Bryce Kelly of the UNSW Connected Waters Initiative Research Centre (CWI).

“Using the technique for the first time in Queensland, we tested 19 irrigation bores and discovered four locations where the Walloon Coal Measures appear to be hydraulically connected to the Condamine River Alluvial Aquifer,” Associate Professor Kelly said.

“This study shows that the risk of any short-term impact from CSG production on groundwater resources used by the irrigation sector remains low, and farmers should not be concerned about the current scale of gas extraction to the north west of Cecil Plains. But if the industry were to expand considerably, more work would be needed to determine the possible impacts of gas extraction on the aquifer in the decades ahead.”

It is not yet known whether the hydraulic connections that allow methane from the coal seam to enter the aquifer are natural, such as a geological fault in the rock, or man-made, such as a leaky abandoned coal exploration well.

The researchers first analysed methane in the air near a coal seam gas water holding pond, determining the isotopic carbon “fingerprint” of the methane that was coming from the Walloon Coal Measures.

“Coal bed methane often has a different fingerprint from methane produced by other processes, such as microbial activity,” Ms Iverach said.

“The groundwater had to be old water that contains no tritium, a radioactive form of hydrogen created naturally and by atomic bomb testing in the 20th century,” Ms Iverach said.

“The groundwater also had to contain high levels of dissolved organic carbon from the coal.

“We found the methane in the water most likely came from the Walloon Coal Measures at only four locations, indicating that the extent of the hydraulic connectivity between the coal seam and the aquifer is low.”

River on fire: even if it’s not coal seam gas we should still be concerned