Innovative research from a UNSW team shows Earth’s radiant infrared heat can be used to generate electricity, even after the sun has set. 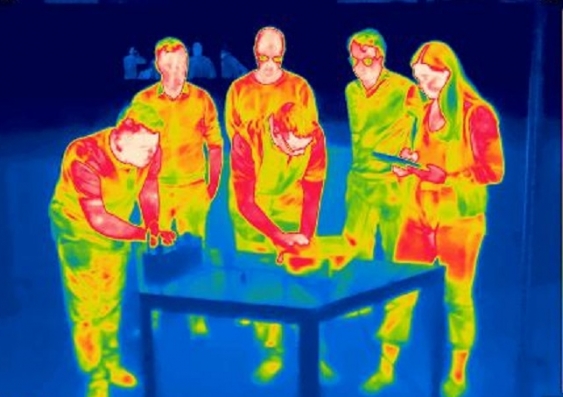 The UNSW ‘night-time solar’ team captured via infrared camera. They used the same kind of semiconductor technology to produce power for the first ever time from the emission of light.

UNSW researchers have made a major breakthrough in renewable energy technology by producing electricity from so-called ‘night-time’ solar power.

The team from the School of Photovoltaic and Renewable Energy Engineering generated electricity from heat radiated as infrared light, in the same way as the Earth cools by radiating into space at night.

A semiconductor device called a thermoradiative diode, composed of materials found in night-vision goggles, was used to generate power from the emission of infrared light.

The results of the research have now been published in ACS Photonics.

Although the amount of power generated at this stage is very small – around 100,000 times less than that supplied by a solar panel – the researchers believe the result can be improved in the future.

“We have made an unambiguous demonstration of electrical power from a thermoradiative diode,” said team lead, Associate Professor Ned Ekins-Daukes.

“Using thermal imaging cameras you can see how much radiation there is at night, but just in the infrared rather than the visible wavelengths. What we have done is make a device that can generate electrical power from the emission of infrared thermal radiation.”

A/Prof Ekins-Daukes says the process is ultimately still harnessing solar power, which hits the Earth during the day in the form of sunlight and warms up the planet.

At night, this same energy radiates back into the vast, cold void of outer space in the form of infrared light with the thermoradiative diode now proven to be able to generate electricity by taking advantage of this process. 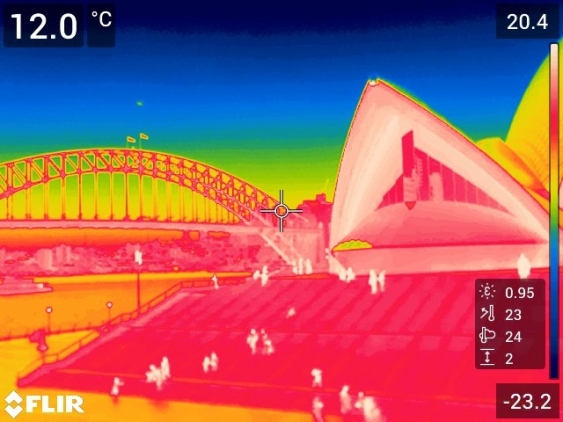 A thermal imaging camera highlights the amount of heat radiating from Sydney Harbour and its surroundings back into the atmosphere at night. Image supplied.

“Whenever there is a flow of energy, we can convert it between different forms,” he said. “Photovoltaics, the direct conversion of sunlight into electricity, is an artificial process that humans have developed in order to convert the solar energy into power. In that sense the thermoradiative process is similar; we are diverting energy flowing in the infrared from a warm Earth into the cold universe,” Dr Phoebe Pearce, one of the paper’s co-authors, added.

The UNSW team’s breakthrough is an exciting confirmation of a previously theoretical process and is the first step in making specialised, and much more efficient, devices that could one day capture the energy at much larger scale.

A/Prof. Ekins-Daukes likens the new research to the work of engineers at Bell Labs who demonstrated the first practical silicon solar cell in 1954.

That first silicon solar cell was only around 2% efficient, but now modern-day cells are able to convert around 23% of the sun’s light into electricity.

And Dr Michael Nielsen, co-author of the paper, said: “Even if the commercialisation of these technologies is still a way down the road, being at the very beginning of an evolving idea is such an exciting place to be as a researcher.

“By leveraging our knowledge of how to design and optimise solar cells and borrowing materials from the existing mid-infrared photodetector community, we hope for rapid progress towards delivering the dream of solar power at night.”

The research team believe the new technology could have a range of uses in the future by helping to produce electricity in ways not currently possible.

One of these could be powering bionic devices, such as artificial hearts, which currently run off batteries which need to be regularly replaced.

A/Prof. Ekins-Daukes said: “In principle it is possible for us to generate power in the way we have demonstrated just from body heat - which you can see glowing if you look through a thermal camera.

“Down the line, this technology could potentially harvest that energy and remove the need for batteries in certain devices – or help to recharge them. That isn’t something where conventional solar power would necessarily be a viable option.”

The new UNSW results build on previous work from the group where co-author Andreas Pusch developed a mathematical model that helped guide their laboratory experiments.

The research team now hopes that industry leaders will recognise the potential for the new technology and support its further development. 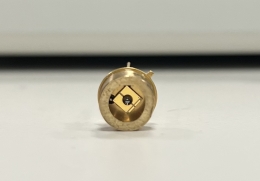 A semiconductor device called a thermoradiative diode has been shown by a team from UNSW to be able to generate power from the emission of infrared light. Image supplied

“Right now, the demonstration we have with the thermoradiative diode is relatively very low power. One of the challenges was actually detecting it. But the theory says it is possible for this technology to ultimately produce about 1/10th of the power of a solar cell,” A/Prof. Ekins-Daukes said.

“I think for this to be breakthrough technology, we shouldn't underestimate the need for industries to step in, and really drive it. I'd say there's still about a decade of university research work to be done here. And then it needs industry to pick it up.

“If industry can see this is a valuable technology for them, then progress can be extremely fast.

“The miracle of solar power today owes itself to world-renowned researchers like Scientia Professor Martin Green at UNSW, but also to industrialists who have raised large sums of money to scale up manufacturing.”