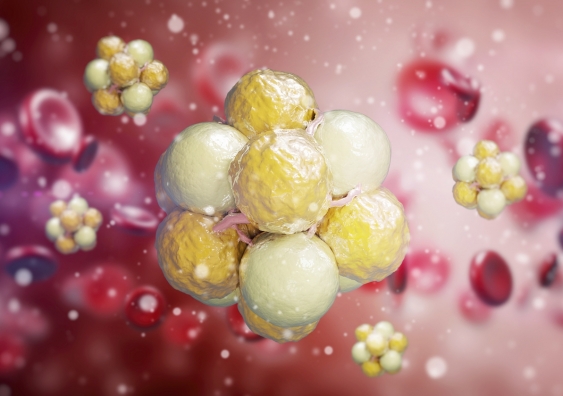 We’ve all heard about cholesterol and the importance of eating heart-healthy foods to keep it in check. But you might not know that only about 20 per cent of our cholesterol comes from our diet. The rest is made in our body, in our liver, intestines and brain.

In fact, cholesterol plays a vital role in our body’s growth and development. It’s a fundamental building block for our cell membranes and is an important precursor molecule. Without it, we couldn’t make hormones like testosterone and oestrogen.

Scientists have a good understanding of the overall cholesterol production – or synthesis – pathway, and the many functional enzymes that power the process. However, many other non-enzymatic factors influence the production process – factors that have been somewhat overlooked until recently.

Now, researchers from UNSW Sydney have discovered a previously under-characterised protein plays a supportive role in cholesterol production. The study, published in the Journal of Lipid Research, shows the protein ERG28 helps to organise the molecular machinery needed to synthesise cholesterol.

For the study, Ms Capell-Hattam and a team of researchers in the School of Biotechnology & Biomolecular Sciences analysed cholesterol production in human-derived cell lines with ERG28 knocked out. They found the genetically modified cells produced between 60-80 per cent less cholesterol than normal, healthy cells.

“When we got rid of the protein, we found there was around a 60–80 per cent reduction in how much cholesterol the cell can synthesise, so it’s a significant drop,” Ms Capell-Hattam says. “So while not essential, without ERG28, the cells struggle to produce cholesterol in an environment where they must synthesise it to survive.”

Read more: ‘Like a tunnel for cholesterol’: scientists show how ‘bad’ cholesterol gets into cells

The supporting cast of cholesterol balance

Enzymes are crucial for powering our body’s metabolic processes, including cholesterol synthesis. While many enzymes are individually functional units, others work better by binding together with support proteins to help make larger, more efficient molecular machinery.

“Imagine you had a car without the chassis. It might still be able to work on its own, but it might not be as efficient with nothing to help hold it together,” Ms Capell-Hattam says.

Many of these support proteins have previously been spotted in our cells. But for some, like ERG28, their role in modulating cholesterol function has only been speculated based on our understanding of its equivalent protein in yeast.

This is because the way cholesterol is synthesised is relatively similar to how yeast synthesise ergosterol, a component of fungal membranes that serves many of the same functions that cholesterol serves in animal cells.

“The more we understand how our bodies make and control cholesterol, the better it is from a health perspective.”

“When you knock out ERG28 in yeast, they stop producing sterol, and you see the precursor accumulate. So, that’s what we thought would happen in human cells,” Ms Capell-Hattam says.

But it turns out this is only partially the case in humans. According to the study, ERG28 appears to exert more control over the cholesterol synthesis pathway than was previously observed in yeast studies.

The research team is looking to conduct a follow-up study to further investigate the role ERG28 plays in the metabolic pathway.

“It would also be very interesting to see what happens if researchers were to investigate what happens when ERG28 is knocked out in an animal model,” Ms Capell-Hattam says.

While this discovery alone may be molecular in size, understanding all the factors involved in the cholesterol synthesis pathway and different novel control points may lead to advances in managing health and disease.

Reducing high blood cholesterol levels is vital for managing heart disease risk. The statin class of drugs inhibit a very early step in cholesterol synthesis and has been effective in treating heart disease. However, they are not without their side effects.

Altered production of cholesterol is also emerging as a driver behind cancer progression. A previous study found ERG28 to be overexpressed in some cancer cell lines.

Inhibiting cholesterol synthesis, alongside chemotherapeutics, may one day be a viable treatment for slowing some types of cancers, Ms Capell-Hattam says.

“The more we understand how our bodies make and control cholesterol, the better it is from a health perspective.”