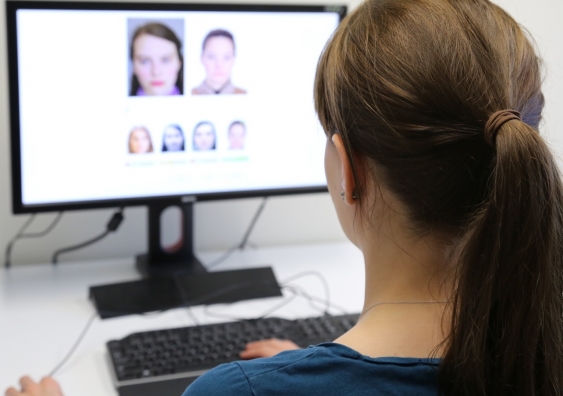 An illustrative example of a face matching task

The UNSW-led study is the first to test how well people perform on this difficult but common operational task carried out by passport officers.

“Our research shows that accuracy can be significantly improved by recruiting staff who are naturally good at face recognition  – the so-called “super-recognisers” – and then giving them in-depth training in the use of the software,” says study lead author and UNSW psychologist Dr David White.

The study is published in the journal PLOS ONE.

Automatic face recognition software is increasingly being used for police work or when people apply for identity documents such as passports, immigration visas or driver licences.

These commercial systems search large databases of known offenders or existing passport or licence-holders and generate a list of the top eight or so “candidate faces” that closely match the suspect or person applying for a document.

“The accuracy of automatic face recognition software has improved markedly in recent years. But, despite its name, the system is not fully automatic.”

A match could help reveal, for example, if someone is fraudulently applying for a second passport under a different name.

“The accuracy of automatic face recognition software has improved markedly in recent years. But, despite its name, the system is not fully automatic,” says Dr White.

“Human skills are also very important. Once a list of candidates has been generated by the software, a police officer or passport officer must decide whether any of these images are of the target person. Our study is the first to test how well people can match the identity of faces selected by facial recognition software.”

The researchers tested 42 untrained students and 24 non-expert passport officers who make face-matching decisions in their daily work using the software, but who have only had a small amount of training.

The students and non-experts passport officers made errors 50% of the time when determining whether a face was on the list of candidates or not.

“Their performance was very poor, and our results show that mere practice does not improve this. It shows the software sets them a very difficult face-matching task,” says Dr White.

“But it is encouraging that specialist facial examiners performed far better than the untrained students and the non-specialist passport officers. They outperformed other groups by 20 percentage points.”

As a result of Dr White’s research, the Australian Passport Office has recently begun to recruit staff who are naturally good at face recognition.

The study authors include UNSW’s James Dunn and Associate Professor Richard Kemp, and Alexandra Schmid of the University of Sydney.

Super-recognisers accurately pick out a face in a crowd – but can this skill be taught?

Human plus machine – face recognition at its best