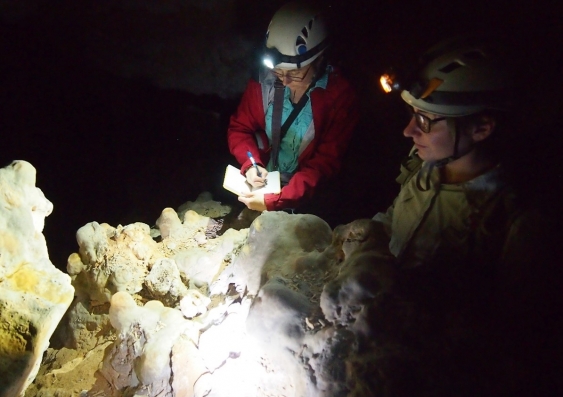 Researchers have been studying climate history via cave stalagmites for around half a century, but this is the first time they've been used as a record of past fires. Photo: Andy Baker

Like Plato’s Cave, where fires reveal the portrait of an otherwise hidden reality, researchers have for the first time used a stalagmite’s chemical signal to reveal the nature of Australia’s historic wildfires, identifying differences before and after European settlement.

“For around 50 years, researchers have focused on the climate record contained in cave stalagmites,” says Prof Andy Baker, project chief investigator from UNSW’s School of Biological, Earth and Environmental Sciences. “However, hiding in the shadows all along was this geochemical record of past fires.”

The stalagmite used in the study, findings of which are published in the journal Geochimica et Cosmochimica Acta, was extracted from Yonderup cave in Western Australia and preserved a record of fires, climate conditions and the intervening years since its formation, allowing researchers to link local fires with any climatic antecedents.

“We found that the largest fire event in the [stalagmite] record, in approximately 1897, coincided with a decades-long drought period known as the Australian Federation drought,” says Dr Liza McDonough from ANSTO and lead author of the study, conducted with UNSW and other universities. “The intensity of this fire was likely caused, at least partially, by these dry conditions.

“We also know that this [the largest fire] occurred a few decades after Indigenous cultural burning would have been suppressed by Europeans, so the fire was also probably exacerbated by a build-up of understorey vegetation and dry combustible material on the forest floor due to removal of Indigenous land management practices.” 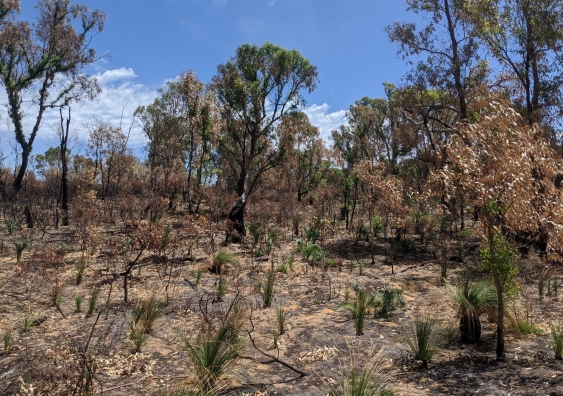 Yanchep National Park after a fire in 2019. Photo: Andy Baker

This is the first study in which a stalagmite’s geochemistry has been used to describe historical fires. The technique relies upon the stalagmite’s composition, the variation in its elements and the order in which they were laid down.

“Nutrients such as phosphorus, and trace metals are found in bushfire ash and, in theory, can dissolve into waters that eventually infiltrate underground caves. Our research provides the first evidence that water containing high concentrations of these dissolved ash-derived elements can also alter the chemistry of a stalagmite and result in the preservation of signals from past fire events,” says Dr McDonough. 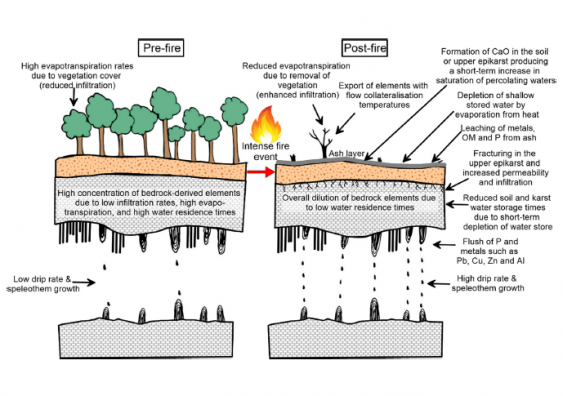 Conceptual figure showing the impacts of extreme fire on the study's stalagmite specimen.

Why had stalagmites not been previously discovered as archives of past fires? “We realised we needed to use the highest resolution geochemical techniques available, as stalagmites grow very slowly. In one year, a stalagmite increases in height by the same thickness as that of a sheet of paper. The geochemical trace left by a fire would be even thinner.”

It’s not just historical fires that are recorded in stalagmites but also the annual accumulation of years, much like tree rings.

“In regions with high seasonality,” Dr McDonough says, describing the stalagmite’s record of time, “wet winters can lead to a flush of organic matter into the dripwaters that form stalagmites. This causes annual dark bands alternating with light calcite bands in summer. This means that these stalagmites can be easily and precisely dated by counting back the annual layers.”

While the particular portion of stalagmite used in this study is relatively young, allowing scientists to peer back just 260 years, the range of time promised by other stalagmites and other speleothems (cave ornaments) stretches back much further, thousands or even tens of thousands of years. 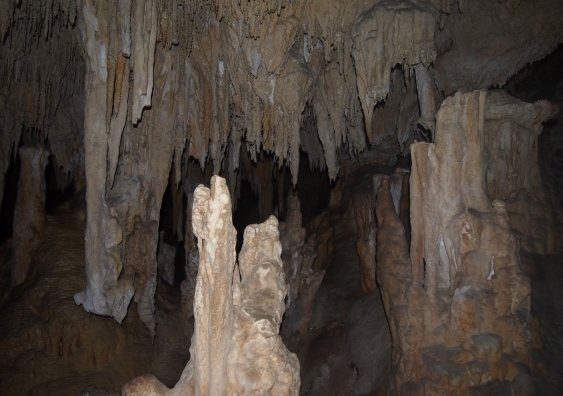 This new technique opens the possibility of speleothems, and their chemical record, to describe historical fire and climatic events around the world “potentially anywhere we might find caves”. (Speleothems in Yonderup Cave, Yanchep National Park.) Photo: Andy Baker

“Further investigation of the combined climate and fire records captured in stalagmites will allow us to understand the climatic conditions required for large bushfires to occur, which is essential to properly prepare for and mitigate the impacts of large fire events.”

The authors would like to respectfully acknowledge the Whadjuk Noongar people, the traditional custodians of the land at Yanchep where this study was conducted, for whom the land has strong mythological, ritual and ceremonial significance.