Cyrille Boyer, winner of the 2015 Malcolm McIntosh Prize for Physical Scientist of the Year, is mimicking nature to create functional polymers and next-generation nanomedicines to treat infectious diseases. 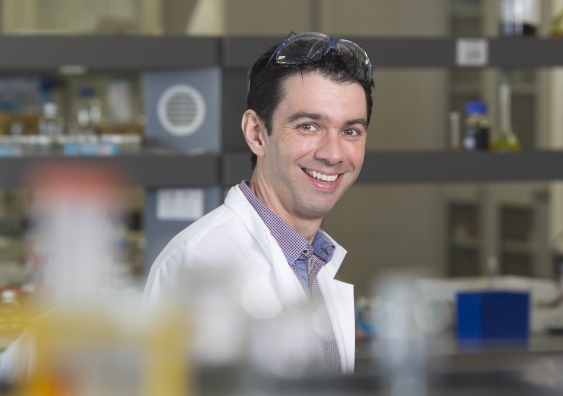 Polymer chemist Cyrille Boyer from UNSW has been awarded one of the Prime Minister’s Prizes for Science – the nation’s most prestigious awards for excellence in scientific research and teaching.

For his innovative work using light to create complex, functional polymers, Boyer has won the 2015 Malcolm McIntosh Prize for Physical Scientist of the Year.

The $50,000 prize honours early or mid-career researchers who have made outstanding achievements that can improve human welfare or benefit society.

“UNSW is delighted that Associate Professor Cyrille Boyer, one of our top researchers, has been recognised nationally by the Prime Minister’s Prizes for Science.”

A French national, who grew up on a vineyard near Avignon, Boyer’s foray into science began with a chemistry set, gifted to him by his parents at age 10.

Today, he is recognised internationally and his research has been patented in several countries by the likes of heavyweight engineering firms DuPont and Toso.

An Australian Research Council Future Fellow and associate professor in the UNSW School of Chemical Engineering, Boyer has been developing a more sustainable process to build polymers, which are chains of small, repeating molecules.

Natural polymers, such as DNA and proteins, are ubiquitous in the biological world, and in our built environment, synthetic polymers are used to make paints, adhesives, textiles and plastics.

As techniques to create polymers get more sophisticated, chemists can design materials with unique physical properties and functions, opening up a range of applications for drug delivery, medical diagnostics, energy storage, and for non-stick and anti-bacterial surface coatings.

Boyer, who is a member of the Centre for Advanced Macromolecular Design at UNSW, has been developing a more sustainable polymerisation process inspired by photosynthesis – the process used by plants, algae and certain bacteria to convert sunlight into stored energy.

“By using light we can significantly reduce the energy consumption and carry out the polymerisation process at room temperature,” he says.

In essence, Boyer and his team can precisely control when and where they introduce the next link into their polymer chains simply by shining a light, and by using lights of different wavelengths, or intensities, they can create links between up to 10 different compounds.

“Light also allows us to precisely manipulate and control the polymer properties,” he says.

In addition to using a renewable form of energy, Boyer’s group recently went one step further, incorporating a biodegradable catalyst.

“There are around 200,000 healthcare associated infections in Australian acute healthcare facilities each year costing the government several billions of dollars.”

In a world first, they demonstrated that visible light along with chlorophyll – a natural, non-toxic and abundant pigment found in plants – could be used to activate the polymerisation process and produce well-defined, functional materials. The results were reported in 2015 in the prestigious Chemical Science.

“This is very exciting for our group and the polymer community globally, because it means we can now overcome the limitation of toxicity,” he says.

“This recent advance brings us one step closer to emulating the synthetic capabilities of nature, which could lead us to the possibility of producing synthetic polymers with comparable properties of natural polymers.”

Boyer’s team has also demonstrated another impressive world-first: they recently triggered a similar polymerisation process using near-infrared light, which has longer wavelengths than visible light and can penetrate a wider range of materials, including human skin.

He says this will enable non-toxic polymers to be made inside the body, for things like tissue engineering and wound healing, and in implant surgeries.

Boyer, who is also the deputy director of the Australian Centre for Nanomedicine at UNSW, is using his expertise in polymerisation to develop intelligent, drug-delivering nanoparticles.

By tailoring the size, shape and surface properties of these nanoparticles, which are thousands of times thinner than a sheet of paper, Boyer can exert incredible control over where they end up inside a cell, and when they deliver their therapeutic agents.

One such particle, which will deliver antibiotics in combination with nitric oxide and/or carbon monoxide, could help in the fight against antimicrobial resistance – a growing international problem that could have catastrophic consequences.

A Review on Antimicrobial Resistance, funded by the UK government and released in December 2014, predicts drug-resistant infections could kill 300 million people and cost the global economy $100 trillion by 2050.

The World Health Organisation’s 2014 report on global surveillance of antimicrobial resistance concluded that “without urgent, coordinated action, the world is heading towards a post-antibiotic era, in which common infections… can once again kill.”

“After a discussion with a clinician during a nanomedicine meeting, I realised there is a need for new therapeutic approaches for the treatment of infectious diseases. This is particularly relevant to healthcare facilities and hospitals,” says Boyer.

“There are around 200,000 healthcare associated infections in Australian acute healthcare facilities each year costing the government several billions of dollars.”

One big issue in antimicrobial resistance is biofilms, where microorganisms adhere to each other, building into a layered slimy mass. Biofilm infections, such as pneumonia in cystic fibrosis patients and chronic wounds, affect millions of people in the developed world each year.

“In these structure, microbes are 1000 times more resistant to antibiotics than when they’re in their planktonic form,” says Boyer.  “They transfer their resistant genes more quickly, they regenerate and they spread.”

The objective, says Boyer, is to deliver the nanoparticles to an infection site in a very controlled manner. The chemical sends a signal causing the biofilm to breakdown, and the nanoparticle then releases its antibiotic, killing the dispersed bacteria.

His work in the field of nanomedicine could also yield new treatments for different types of cancer, and improve medical imaging and diagnostics.

“UNSW is delighted that Associate Professor Cyrille Boyer, one of our top researchers, has been recognised nationally by the Prime Minister’s Prizes for Science,” says UNSW President and Vice-Chancellor Professor Ian Jacobs.

“These prestigious awards honour the best minds in the country – researchers who are making important breakthroughs to improve our society.

“Cyrille is a leader in his field of polymer chemistry, with a focus on pioneering practical, industry-relevant solutions to globally important problems.”