Ask a quantum physicist to draw a chair and the result can be a fundamental shift in how they see the world. 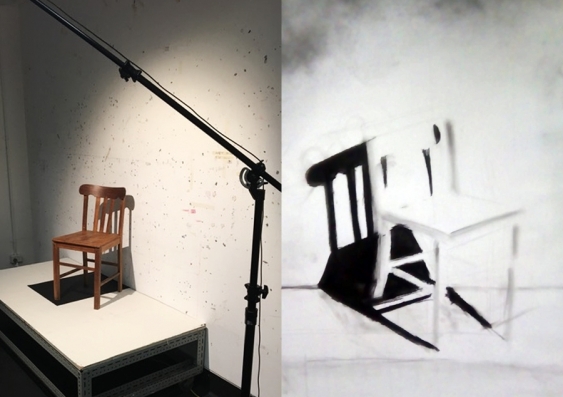 Possibly the world’s first ever quantum drawing workshop has been held at UNSW.

Bell’s theorem draws an important distinction between quantum mechanics, a branch of physics that deals with the behaviour of sub-atomic particles, and the world as described by classical mechanics, or nature at an ordinary scale.

The theorem was designed to prove or disprove the fundamental concepts of quantum mechanics.

In the process of drawing a chair, Professor Thomas said, the physicists were presented new ideas about the role of the observer and the probabilities involved in trying to capture a reality.

“I have been interested in quantum physics since 2010, when I started at UNSW, so I developed artworks around what (CQC2T Program manager) Andrea Morello is researching in the Quantum Computing Centre,” Professor Thomas said.

Professor Thomas said through drawing, the physicists questioned their roles in observing and measuring.

“I’m trying to learn the language of physics to challenge the notion of fundamental concepts of seeing the world, because at the moment [physicists] have very focused ideas about how these things are progressing, whereas artists have historically been very involved in notions of perception,” he said.

'If all scientists are basing their observations through technologies, what would it be like if their perception were able to inquire from different perspectives?'

“I am just trying to encourage those same students to draw, hopefully to increase that perception, by making these relationships that are analogous relationships between what they do as physicists and what they do in the act of drawing.

“If all scientists are basing their observations through technologies, what would it be like if their perception were able to inquire from different perspectives? To be able to understand and comprehend things through the very act of seeing, then one would think that it’s a very important thing for them to do?”

He said throughout the activity, complex subjects such as entanglement, superposition, and the classical-quantum divide were explored in relation to the act of drawing.

CQC2T Program manager Professor Andrea Morello said the workshop was “a curious experiment in exposing professional quantum scientists to the aesthetic and practice of drawing”.

“Paul Thomas gave us some insightful analogies between the act of placing marks on the paper, and the act of observing, or 'projecting', a quantum system,” Professor Morello said.

Irene Fernandez, who is doing a PhD in Quantum Computing at the School of Electrical Engineering, said the workshop inspired two ideas.

“The idea that when you make a trace, you statistically determine the reality of the object that you are trying to measure,” she said.

“I could see the chair as the reality that [Albert] Einstein believed in, and my hand as the tool of quantum mechanics.”

“[Secondly] the idea that the material memory makes this interesting effect where you no longer control your drawing, but it is the drawing that starts driving your decisions.”

Ms Fernandez said she hoped there were more art-related activities like the drawing workshop in the future.

“Physics and arts should be more connected, because in the end, both are human expressions and just because of that, they should be more often related,” she said.

Professor Thomas said intentional repositioning and reshaping of science practices through art can promote exploration of different ways of visualising, perceiving, understanding, communicating and acting in the material world.

“In so doing, this workshop becomes a new model for facilitating transdisciplinary development of alternative domains and discourses that garner insights gained from visual communication, technological interaction and embodied practices.”

His book Quantum Art and Uncertainty will be released in mid October.