UNSW researchers have released the findings of $1.3 million project aimed at developing a safety rating system for quad-bikes. 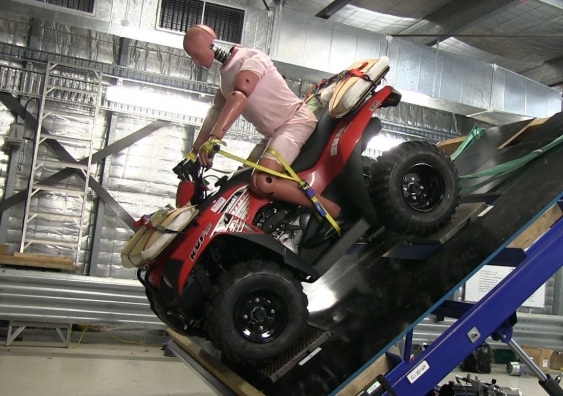 Safety testing of quad-bikes at the NSW Roads and Maritime Services Crashlab facility near Sydney.

Transport safety researchers from UNSW have released the findings of a Quad-Bike Performance Project aimed at developing a safety rating system for vehicles used in workplaces including farms.

Lead researcher UNSW Professor Raphael Grzebieta says the introduction of a safety rating system similar to that employed by the car industry - a key recommendation from the study - could see major improvements in vehicle design and safety and a “likely reduction in the number of quad–bike deaths and injuries on farms”.

Since 2001, more than 210 Australians have died in quad-bike accidents and thousands more have been seriously injured. Roughly two-thirds of those fatalities have occurred on farms, making quad-bike incidents the leading cause of death in the agricultural sector.

“Manufacturers seem to accept that the number of quad bike-related deaths and injuries is inevitable, but we absolutely do not,” says Professor Grzebieta. “A safety rating system would allow consumers to dictate through their purchasing power the design changes they want to see manufacturers make.”

Over the last year, coronial inquests in New South Wales and Queensland have been investigating the circumstances that led to a combined 17 deaths. Professor Grzebieta and his co-authors Adjunct Associate Professor George Rechnitzer and Mr Keith Simmons from the UNSW Transport and Road Safety Research Centre were key witnesses at the inquests and their findings informed the recommendations delivered on 3 August in Queensland.

The UNSW Quad-Bike Performance Project focused squarely on developing a safety rating system for stability, handling and crashworthiness for vehicles used in workplaces and on farms, where most deaths (59%) result from chest injuries and asphyxiation as identified by report co-author Dr Andrew McIntosh from Federation University. This differs from recreational use, where the main cause of death (49%) is head injuries.

More than 1,000 tests were carried out at the Roads and Maritime Services world-standard Crashlab facility near Sydney. The researchers tested and rated quad-bikes, which are single-rider vehicles operated like a motorcycle, and compared them to side-by-side vehicles (SSVs), which are multi-passenger vehicles that tend to have greater lateral stability, better dynamic handling, rollbars, safety restraints, and are operated like a car with a steering wheel.

Four of the five SSVs tested received four-star ratings, significantly outperforming quad-bikes in terms of resistance to rollovers and the likelihood of preventing serious injury. Only two of the 11 quad-bikes tested rated higher than two-stars.

“The real game-changing outcome of this research is that people who use quad-bikes on farms are now viewing side-by-side vehicles, which are considerably safer, as viable alternatives,” says Professor Grzebieta. “In terms of stability a quad-bike is like driving a heavy truck over rough terrain and trying to stay upright. A side-by-side vehicle is more like driving an SUV over rough terrain. It’s easier to see which is the safer choice.”

He says SSVs have advantages, which include carrying heavier loads and passengers, but says it’s vital that occupants wear helmets and seat belts, which should be at least three-point or harness belts.

“Safer vehicles such as well-designed SSVs are much less demanding in operator skill, offer greater stability and rider protection, and should be evaluated and considered for the workplace as an alternative to the quad-bike,” he says.

One of the other key recommendations from the project is an immediate ban on children under the age of 16 riding adult vehicles.

“There’s still a view in the farm sector that this is okay,” says Professor Grzebieta. “These laws need to be changed to impose some kind of penalty on parents who willingly allow their children to operate adult quad-bikes. Too often we’ve seen children asphyxiated and crushed underneath these vehicles.”

The Queensland Coroner has called for the adoption of a consumer safety rating system, and recommended that the state government introduce legislation to “prohibit children under the age of 16 from operating adult-sized quad-bikes and side-by-side vehicles” and “from being carried as passengers on adult-sized sit-astride quad-bikes”.

The results of the NSW coronial inquest are due out later this year.

The WorkCover Authority of NSW, with a contribution from the Australian Competition & Consumer Commission, funded the $1.3 million project, which has made 24 recommendations in total. The full report is available for download here.

This below video prepared by NSW WorkCover explains more about quad bike fatalities, the UNSW project and the tests that were run on vehicles