UNSW Sydney engineers are developing new satellite technology that can be used to determine the state of the seas as well as a number of other useful applications. 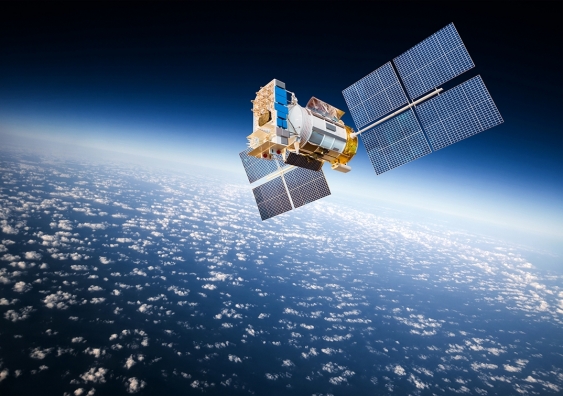 Satellite GPS signals can provide a snapshot of the sea and terrestrial conditions by the way they are reflected from the earth's surface. Picture: Shutterstock

Real-time information about wild seas and unfavourable ocean conditions could be used to make shipping more safe and efficient thanks to passive radar technology being developed by UNSW Sydney engineers.

And the technology has also piqued the interest of the Australian Defence Force because of its ability to ‘see’ through cloud and tree cover while maintaining radio silence.

Professor Andrew Dempster of UNSW’s School of Electrical Engineering and Telecommunications has been developing and trialling a new type of receiver that looks for satellite navigation signals bounced from the Earth’s surface in a process called reflectometry.

As he explains, reflectometry looks at the GPS signals that come directly from satellites as well as where, and at what angle, the signals bounce off the earth’s surface. He and his colleagues have built four generations of receivers that are designed to look for these bounced GPS signals from satellites overhead.

“This most recent generation of our GPS receivers we have put into space aboard CubeSats,” Professor Dempster says, who is also director of the Australian Centre of Space Engineering Research.

CubeSats are miniaturised satellites used in space research which are a fraction of the cost to launch and maintain due to their tiny proportions – the UNSW-EC0 satellite was 10cm x 10cm x 20cm and about 2kg. A CubeSat fitted with “Namuru” or “Kea” – two of the receivers tested so far –  is able to provide live analysis of the ocean conditions, or ‘sea state’, by recording bounced GPS signals from the sea’s surface.

“What we do is measure the delay from the satellite to surface and back to the receiver on the satellite,” Professor Dempster says. “Because there are multiple facets on ocean waves that it can reflect from, it means that we get a wider response in that delay from the different angles where the signals are reflected. The rougher the seas, the wider the response. We also measure the Doppler frequency shift in those reflected signals.”

From this information, someone looking at the information recorded by the receiver may be able to deduce the wave heights, direction of the waves, wavelength (distance between waves), wind speed and wind direction.

“There are lots of interesting applications of this data,” Professor Dempster says. “We’re talking with [maritime and shipping management company] Lloyd’s Register about this, while other interested parties would be big maritime companies, oceanographers, and people working with wave power generation.

“As an example of how it could be useful, gas companies often refuel their big tankers out at sea, which means safety can be compromised by weather conditions. So if you can refuel your ship for an extra half an hour because you have better knowledge of changes in sea state, then you can start putting a dollar value on what that time saving means to your company.”

As well as sea conditions, the device can also pick up ships in the area because the GPS signal bounces off a vessel in a different way, Professor Dempster says. “This is one of the reasons the ADF is interested in it.

“Five years ago we took one of these receivers on a plane and flew it over a forest and recorded the raw signal and played it back through our new instrument. As we flew over the forest, we were able to pick out a power pylon which would otherwise be hidden from view. This shows that infrastructure that stays hidden even in satellite images can now be detected.

“And the fact that it’s a receiver means it operates in radio silence – in other words, it doesn’t give away your position, which is another reason why Defence is interested in it.”

The receiver could also be put to good use is by integrating it with an RPAS – remotely piloted aerial system – where it could be used potentially to map floods. Then there’s the high altitude persistent systems – HAPS – which fly autonomously at twice the altitude of regular aircraft and being powered by solar, that can stay flying for months.

“Airbus makes one of these, and being at such a high altitude, it’s not subject to the same weather that might make flying at the regular altitudes dangerous during unfavourable weather conditions,” Professor Dempster says.

“With a constellation of the cheaper CubeSats passing overhead in orbit, you could have a passive radar receiver on these that can see through cloud cover and see through smoke which could make it really useful to get an overview of the extent of floods or bushfires.”

Professor Dempster says in the months ahead, he and his team will continue to streamline the latest generation of Kea receivers.

“Our new instrument uses two Keas, one looking up, to give position like a normal receiver, and one looking down, to look at the reflected signals.

“Currently we’re looking to keep the two receiver architecture for the instrument but in the medium term we’d like to develop a single board solution that does all the GNSS (Global Navigation Satellite System) work plus incorporate the control computer, data storage and communication functions.”