Hundreds of school students got a rare peek into what life as a scientist could be like, as Professor Michelle Simmons opened the doors of the Centre of Excellence for Quantum Computation and Communication Technology ahead of National Science Week. 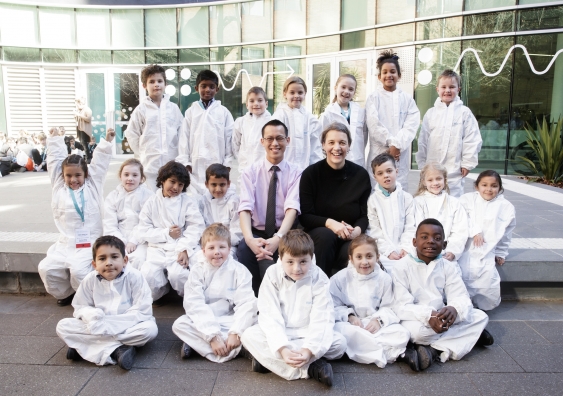 When Scientia Professor Michelle Simmons became Australian of the Year 2018, her acceptance speech touched on themes that resonated with many school students and teachers: her encouragement of all young people to pursue what they love, to set their sights high, to tackle the hardest challenges in life and to be the creators – not just the users – of technology.

Following the ceremony – and numerous subsequent speech invites from schools across Australia – Professor Simmons and her team decided to open the doors of the Centre for Quantum Computation and Communication Technology for one full day, to offer students the opportunity to see the team’s groundbreaking research in action – a first in the centre’s history.

Professor Simmons said the goal was to open the students’ minds to the possibilities a career in STEM offers.

“When I was younger, I got to see a fabrication plant in the US, and observed how they make semi-conductor chips. It completely opened my mind to the world of possibility that was out there. I remember thinking that all children should see this.

“So here we are in Australia, we've got this great facility of building chips in-house, so I'm hoping we opened the students’ eyes to what's out there, to all the kind of jobs they can have, and just get them excited by science.”

A rare view into quantum labs

The day was jam-packed, with primary school students visiting the centre in the morning, and secondary students following in the afternoon. After an official welcome and a mini-lecture by Michelle Simmons, the first school group was led through the quantum laboratories to witness the technology being used to build a quantum computer in silicon.

The students were led through a range of different labs – each one dedicated to building and testing different components of the silicon quantum computer chip. This includes the Scanning Tunnelling Microscope “Atom” lab where the atoms are placed precisely onto a silicon chip, the Clean Rooms where miniature wires are added to the silicon chips, and the “Cryo” Fridge Lab, which tests the electrical response of the atom qubits in fridges at temperatures close to -273 degree C. 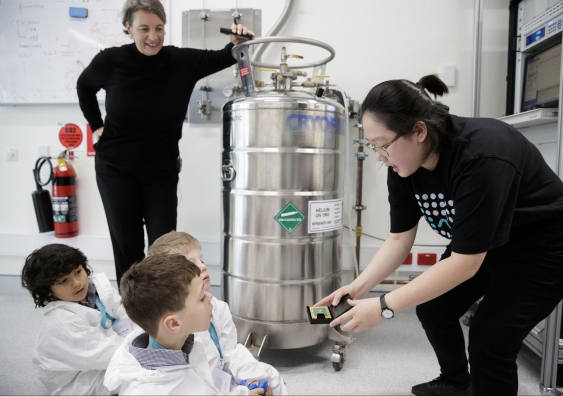 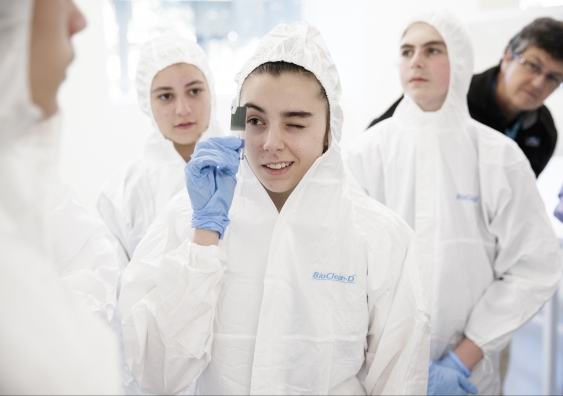 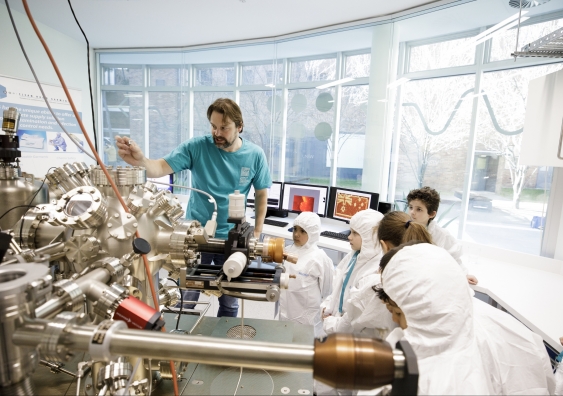 Students also embarked on a series of interactive workshops and presentations. Hands-on experiments included a ‘silicon full clean’ station, where students got an insight into the day-to-day of the centre’s researchers by helping clean silicon samples. In another experiment, research staff cooled down several everyday objects – like fruit and marshmallow – with liquid nitrogen, to show students how materials react to different temperatures. Students were fascinated to observe how the fruit, for example, becomes very brittle when exposed to nitrogen. 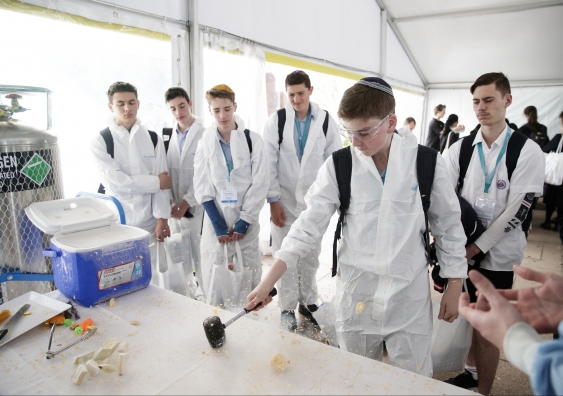 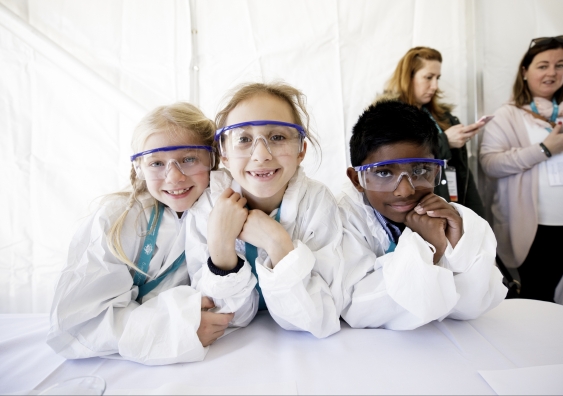 “By showing the kids some practical mathematics with something as simple as a deck of cards, I’m hoping to have demonstrated to them that there are patterns all around them in the universe – some of them seem invisible but once you have an eye to perceive them, the possibilities are endless,” Eddie said.

“What I hope the children take away from today is that mathematics is found everywhere and it's for everyone. I think people walk through their life not realising that they swim in this ocean of numbers and shapes that are there to be understood and appreciated.

“We also fall for the misconception that there's a certain kind of person who's a maths person and the rest of us are just normal and can't comprehend all this. I don't believe that, I think maths is for everyone, and it's something we can all embrace.

“In fact, mathematics is the gateway that allows us to solve these really profound and world-changing problems, like trying to construct a quantum computer!” 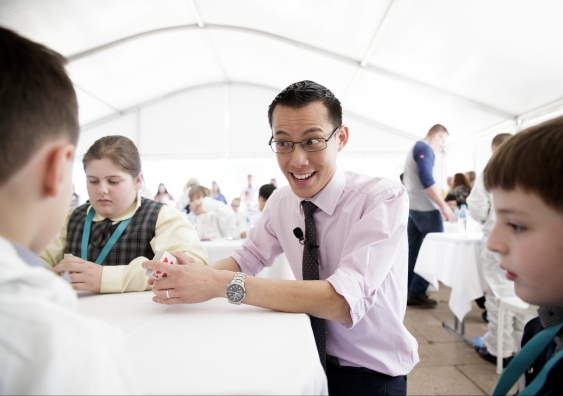 Among the 200 students visiting the centre was a group of special guests: the Simmons Class, a year 2 class from St Mary of the Cross Primary School in Point Cook, Victoria. Every year, the school names their classes after inspiring themes and individuals – and this year, under the theme of Australian scientists, this class named themselves “Simmons”.

Earlier this year, Michelle went to see the “Simmons” class in Point Cook, and invited them to visit the centre on Open Day. Many of the children had never been on a plane before.

The school’s principal, Leon Colla, said that seeing the centre’s research in action was a great experience for the children.

“I hope that the children will take out of today that science is incredibly important for our future as a country and for them as leaders of the future – and that science is a great pathway to take in education.” 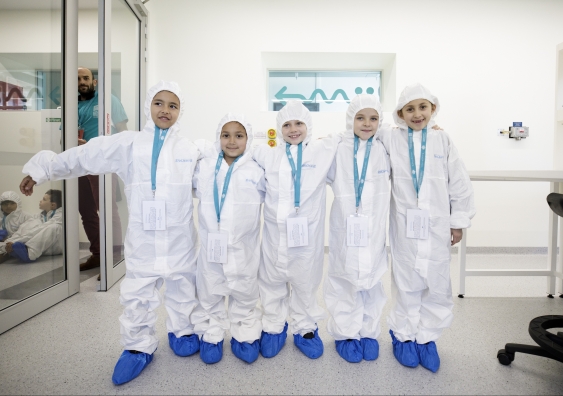 The school’s teacher, Jennifer Ryan, who had kickstarted the visit by simply emailing Professor Simmons, said interacting with Michelle and the research had created a renewed passion in her students to try new things, be problem solvers, and open up to risk-taking.

“They've learned a lot about quantum physics as a grade 2, and their interest in science has just escalated. Just coming here today I can see how much they've picked up on Michelle’s work because they can relate to what they're seeing.

“I hope they take out of today that they should dream big. I catch myself looking around, thinking what an incredible opportunity we’ve received – so I hope my students always think that anything's possible with hard work and putting your mind to it.”

The positive sentiment was echoed by one student’s dad, James Wetherill, who said his daughter Megan was – to use one of her own words – ‘nerve-cited’ to visit the centre.

“She was really nervous, and, exceptionally excited as well. She went and bought herself a science kit over the weekend and sat there with her goggles on and said she was practising for coming up today, so she's loved it, she's been fully involved, and hopefully it helps guide her moving forward.”

Another student’s mum, Shella Martin, said the journey her family had been on with Michelle Simmons had been phenomenal.

“This is basically a dream come true for us. Charlton has always said he was going to be a scientist and mathematician, but he hadn't seen that come true in any other moment until now.

“To be able to incorporate this into his education, to show him the potential of the things he can do when he's older, is just amazing, so we're just so happy to be able to have this opportunity.” 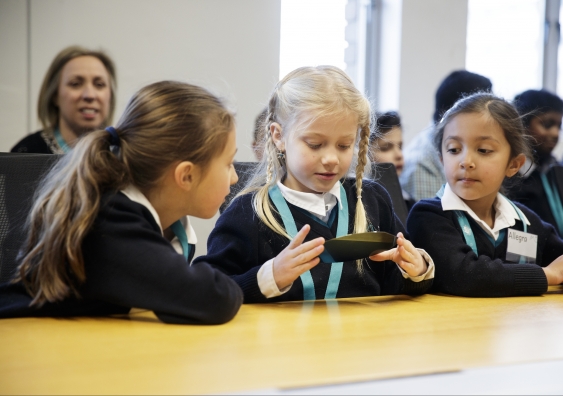 Professor Michelle Simmons is delivering the Einstein Lecture as part of Science Week on Tuesday 14 August, 6-7.15pm, at UNSW Sydney. The event is sold out, but you can put your name on a waiting list.