In search of the best telescope location, UNSW team heads to high places

An international effort to pinpoint the site for a new telescope is relying on technology developed by a UNSW alumnus during his PhD. 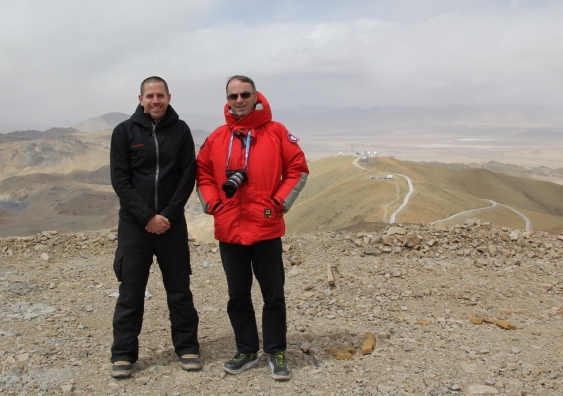 It is a tale of North and South with an astronomical twist, with a UNSW astronomer and a UNSW PhD alumnus heading from Antarctica to the Tibetan Plateau to help find the best site for a new, 12-metre optical telescope.

This year, Professor Michael Ashley from the School of Physics and alumnus Dr Colin Bonner travelled to Ali Observatory in western Tibet to lead the testing and installation of SODAR (Sound Detection and Ranging), a device the astronomers will use to decide where a new telescope is best located.

The road to Tibet was a journey from one extreme to another. Before Tibet, Professor Ashley and Dr Bonner had been on scientific expeditions deploying telescopes in some of the most remote locations of Antartica, including the South Pole itself at latitude 90S. To reach Ali Observatory, the pair had to travel from Tibet’s capital Lhasa to Nagari Gunsa airport, the fourth highest altitude airport in the world.

Ali Observatory is situated on the Tibetan Plateau, at more than 5100 metres above sea level. It’s a good location for studying the night sky, due to the combination of its high altitude and predominantly dry seasonal conditions in the region. 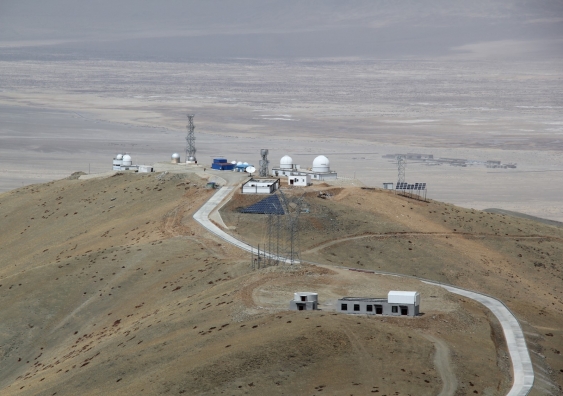 The Ali Observatory is situated on the Tibetan Plateau over 5100 metres above sea level and the potential site of a new telescope. Photo: Colin Bonner

“In astronomy you want to be as high as you can be because it gets you above some of the atmosphere, where it is nice and cold and there is not much water vapour,” says Professor Ashley.

“It’s an amazing location. Antarctica is amazing in more ways than one, but the Tibetan Plateau is like the surface of the moon, albeit with some tufts of hardy grass and a few yaks.”

The pair limited their time at Ali Observatory to a few hours at a time, however, to reduce the risk of altitude sickness.

“The photos don’t capture the feeling of being there – you really notice the difficulty of breathing,” says Professor Ashley.

Ashley and Bonner travelled to Tibet to install a SODAR to help evaluate the stability of the atmosphere at the location. Atmosphere stability is critical for astronomers: tens of metres difference between where a telescope is placed can make the difference between a blurry image of a star and a clear high-resolution one.

'It’s an amazing location. Antarctica is amazing in more ways than one, but the Tibetan Plateau is like the surface of the moon.'

Astronomers are acutely aware of turbulence because it causes stars to twinkle, affecting the clarity of any image they want to take. When light travels down from space towards Earth, it exists as a straight beam until it hits the atmosphere on its way down to the ground. Any interference encountered on the way causes the once straight beam of light to be deflected. The higher the levels of atmospheric interference, the greater the obstacle for astronomers to observe and take images of the night sky

Fulcrum3D’s SODAR aims to help minimise this risk. It is designed to detect minute changes in the atmosphere from turbulence. It sends an acoustic signal into the atmosphere and the sound waves scatter off any turbulence to create an echo. A computer processes the intensity of the echo to help determine what portion of the atmosphere can potentially interfere with any studies of the night sky.

The device is based on an original design by Dr Bonner that he started during his PhD. Dr Bonner is also the founder and Technical Director of Fulcrum3D, a technology development and services company that provides solutions and technical support for the renewable energy sector.

“What sets Fulcrum3D apart is that we have unique technical side points from the SODAR. We are also one of the few companies who not only have a very strong R&D stream, but also do the full service from manufacture, support and ongoing data services,” says Dr Bonner.

“A SODAR is very similar to a submarine sonar but instead of bouncing sound from fish and rocks, we bounce off turbulence in the air.” 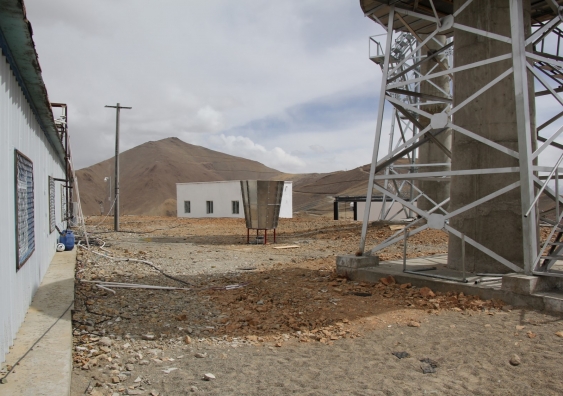 Original versions of the SODAR were put through their paces in Antarctica, where Professor Ashley and Dr Bonner previously worked at an international observatory.

Chinese astronomer collaborators onsite in Antarctica saw the SODAR’s effectiveness and called on the combined expertise of Professor Ashley and Dr Bonner to apply it at Ali Observatory.

There are now plans to construct a 12-metre optical telescope in Tibet. This will be the latest addition to an international cluster of smaller telescopes from the United States and Japan.

“A big part of the visit was assessing locations – there is no point in having a Ferrari-style telescope put on a site that would not produce optimal conditions for astronomers,” says Dr Bonner.

“If you are going to put in money to build a telescope, you need to be absolutely sure it is the best location.”

The device will remain at Ali Observatory for at least a couple of years to collect seasonal atmospheric data. The information will then be analysed by Fulcrum3D and astronomers at the National Astronomical Observatory of China and UNSW to determine the best location for the new telescope.

US lawmakers are taking a massive swipe at big tech. If it lands, the impact will be felt globally