I know what you did last summer: chemical clues in the marsupial’s whiskers can reveal what they ate months – and even seasons – ago. 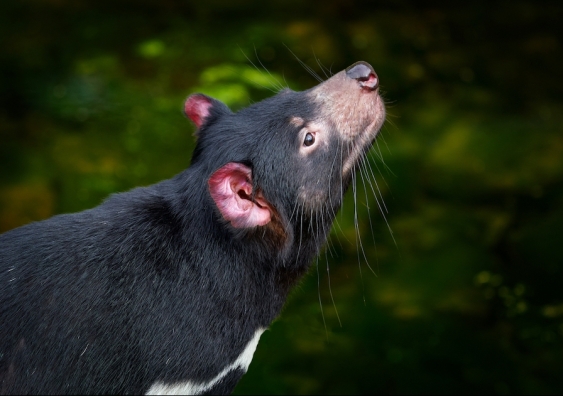 The devil’s in the detail (the chemical details, that is). Photo: Shutterstock.

Scientists can peer at least nine months into a Tasmanian devil’s past by studying its whiskers, a new study led by UNSW Sydney has found.

The long, wiry whiskers on these stocky marsupials hold chemical imprints from food they’ve eaten in the past – records that can help tell broader stories about their foraging habits, habitat use and how they respond to environmental change.

Researchers have now mapped this timescale for the first time, showing that devils’ whiskers can capture seasonal dietary changes over at least nine months and potentially up to a year.

The findings, published this week in Ecosphere, offer a way to monitor the endangered native species with minimal disruptions to their habitats.

“We're using the devils’ whiskers to trace back through time,” says Tracey Rogers, senior author of the study and professor at UNSW Science.

“Once dissected, the whiskers can act like the rings of a tree trunk, painting a picture of what the animals ate and how they lived up to a year ago.”

Up until now, tracing a devil’s culinary history with its whiskers has been a bit like using an out-of-order time machine: scientists could see the chemical records, but couldn’t confirm if they were from a week, month, or year ago. 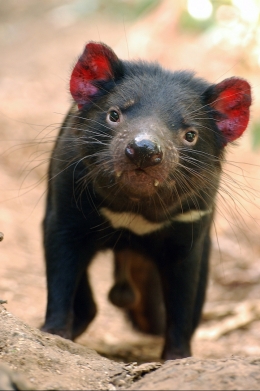 Theo, one of the captive Tasmanian devils involved in the whisker study. Photo: Anthony Britt-Lewis.

To get a clearer picture of the timeline, the UNSW-led research team fed tablets enriched in heavy stable isotopes – types of atoms that don’t decay into other elements over time – to six captive devils at three-month intervals. These stable isotopes acted as timestamps, marking the whiskers with each season’s passing.

When more than a year had passed, the team removed the longest whisker from each animal for analysis. They found the whiskers grew fast at first before slowing down, and that whiskers on different parts of their muzzle grew to different maximum lengths. On average, the longest whiskers held at least nine months of the animal’s ecological history – but as whisker growth slows over time, the researchers suggest it’s likely they can hold up to a year.

The team used their findings to create a new whisker analysis model that can help track how the endangered animals – who were recently brought to the edge of extinction – are faring in the wild.

“Tasmanian devil numbers are currently in recovery after the devastating effects of a highly transmissible cancer called the devil facial tumour disease, or DFTD,” says lead author of the study Dr Marie Attard, a postdoctoral research associate at Royal Holloway University of London, who completed this work during her PhD at UNSW.

“Since the discovery of this disease in 1990s, many healthy individuals have been translocated to disease-free areas or are part of captive breeding programs to help boost their numbers.

“This whisker analysis tool will significantly enhance their management in pre-existing and translocated wild populations.” 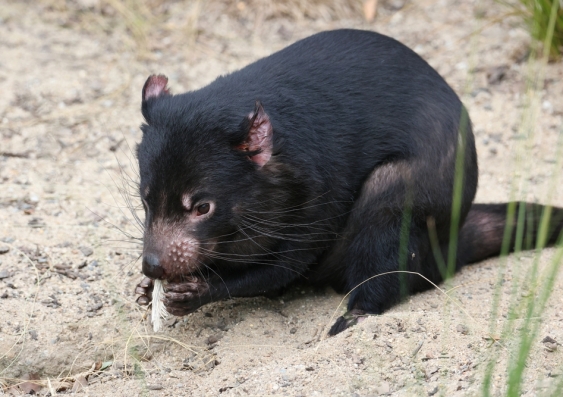 The new whisker analysis model could help us track how these endangered animals are faring in the wild. Photo: Shutterstock.

You are what you eat (no, seriously)

It might just sound like a way to encourage people to eat better, but the phrase ‘you are what you eat’ actually stands true on a scientific level.

Every time we eat something – be it a vegetable or piece of meat – its chemical signatures are broken down and reassimilated into our own bodies.

But as we’re largely made up of soft tissue (which constantly regenerates itself), much of our body can only keep a short-term record of these isotopes. It’s left up to our hard tissues, like hair and nails, to keep a more detailed record.

“These hard tissues have already locked in the stable isotopes, so just one sample of our hair can tell the story of what we were eating at that time it grew.”

In humans, hair follicle analysis can be used for medical research as well as for long-term drug tests.

But in animals, the testing method helps us learn more about animals’ foraging habits, seasonal diet shifts and how they respond to environmental change.

A major benefit of the method is that it picks this information up with minimal disturbance to the animal’s habitat: one pluck per year may tell a more in-depth story about Tasmanian devils’ lifestyle than a week-long observation trip.

While scientists can start applying the new model to their research, Dr Attard says that the method can be improved by further research that increases the sample size and more accurately measures the whisker growth cycle.

Researchers using the method should also only pluck one whisker at a time, as whiskers are important to how Tasmanian devils experience their surroundings. 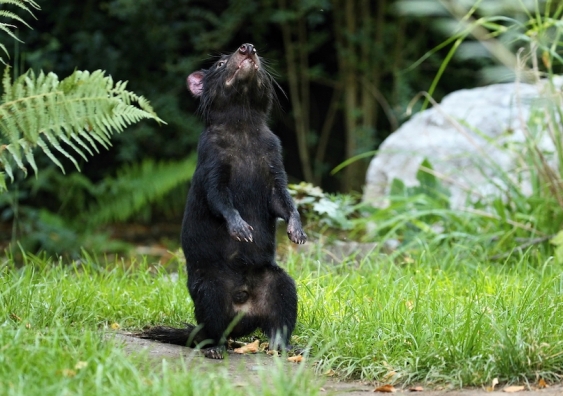 There are only three types of contagious cancer in mammals – and the devil facial tumour disease is one of them. Photo: Shutterstock.

An animal in crisis

In fact, this type of cancer – that is, cancer that’s contagious – is rarely seen in nature at all.

“There are only three instances of transmissible cancer in mammals,” says Prof. Rogers. “Sadly, the devil facial tumour disease is one of them.”

The disease spreads quickly among devil colonies, passing between the animals as they bite each other while fighting. It has devastated many devil colonies since its discovery in 1996.

Different conservation programs have been designed to help minimise the spread of infection and protect the species, for example by relocating individuals to disease-free areas or creating captive breeding programs to help boost their numbers.

Dr Attard says the findings could help these conservation efforts, whether it’s by identifying shifts in individual diet and habitat preferences in wild populations, or helping conservationists select suitable devils for translocation.

“The information we can gain from studying their whiskers can help conservationists protect current devil populations and reintroduce them successfully to areas in the wild.”